It is becoming clearer what each individual party group will propose when the York Council budget is decided on Thursday.

Both Liberal Democrats and Tories look likely to back a freeze on Council Tax levels.

Labour though are likely to overrule this as they still have a small majority on the Council.

The real interest will be that this could be the first glimpse of what may be in store for the City after the 2015 Council elections. 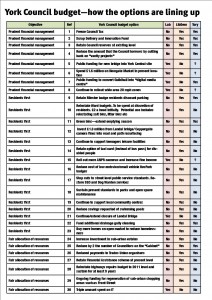 Labour is likely to lose its overall majority then, so some of the changes in priorities will probably become a reality in little over 12 months time.

The main differences between the parties are likely to revolve around how much money they believe the council should borrow.

Interest payments have spiralled over the last 3 years so the postponement of some “vanity project” capital schemes will be on the cards.

Last minute attempts to halt the roll out of 20 mph signs and more ANPR “spy” cameras are likely.

Both opposition parties are likely to call for the immediate reopening of Lendal Bridge.

The LibDems will seek to have the £1.3million, gained through camera fines, used to bring road surfaces back to an acceptable condition.

We will update the list as and when the details of budget amendments become public.