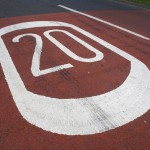 “Speeding remains an issue of high concern, particularly in residential areas or near facilities for young or vulnerable people. That said, we hope that this updated guidance will go some way to ensure that enforcement is appropriate and proportional, and that roads are carefully designed to ensure that drivers habitually self-enforce when it comes to speed limits.

“The principal alteration to our guidance relates to areas under a 20 mile-per-hour limit.

“We are now introducing speed awareness courses as a key part of enforcement in these areas for those who breach the limit between 24 and 31mph. Often, these drivers are mistaken or require further education on the local limit and therefore we are very pleased that the National Driver Offender Retraining Scheme (NDORS) are developing a speed awareness course tailored to these zones which will run from November of this year until 2016.

“Enforcement will be considered in all clearly posted limits, but limits are only one element of speed management and local speed limits should not be set in isolation. They should be part of a package with other measures to manage speeds which include engineering, visible interventions and landscaping standards that respect the needs of all road users and raise the driver’s awareness of their environment, together with education, driver information, training and publicity.

“Rest assured, deliberate high harm offenders will always be targeted and they will be prosecuted.”