Acomb Alive!, the voluntary Group who are taking responsibility for regenerating the Front Street area, have announced their plans for the next few months.

Following on from the successful Pancake Race on 12th February there will be a number of Activity Days in Front Street to attract people into the area to see what is going on, this has followed a successful bid to the Westfield First Community Fund. The next one will be on 30th March and there will be activities for people, the launch of the Easter Egg Treasure Hunt, and lots for children to do. 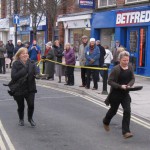 Acomb Alive! have now met with the council to discuss how empty shops can be brought into use, improvements in the area, and efforts to have the business rates reduced by lobbying the Valuation Office.

The street market planned for Easter has been postponed. It is hoped that an event will take place later in the year when a Street Market, with activities like crafts and Vintage stalls, will draw people to Front Street.

A project has been started which could bring empty shops into life. So if you know of any local artists or bands who want spaces then let Acomb Alive! know.