Acomb Traders have drawn together to establish the city’s latest trader association in response to concerns from residents.

They want to see the area boosted to bring it back to the economic levels that other parts of the City currently enjoy.

A mix of businesses met last week to start the ‘Acomb Alive’ campaign to bring more commerce to the area, improve co-operation between local businesses, and to put on events to promote shopping in the Front Street area. 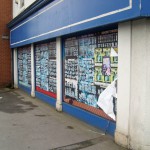 The meeting was chaired by former council leader Andrew Waller, and Sue Hunter, from Floral Elegance, Front Street who had both set up the meeting.

Sue Hunter said; “It was a very positive meeting, and the support of traders for an Acomb Traders Association is encouraging to work together for the benefit of all. We hope that local residents will see what we are doing and give us their support. Some traders have been here for decades showing their commitment to Acomb, but there are concerns about high rents, and the knock on effect that this has on business rates.”

Guest speakers at the meeting were Trevor Fenwick, Chairman of Gillygate Traders, and David Cox from the Federation of Small Businesses (FSB) who had been Chairman of Fossgate Traders for 6 years. Joint promotion of the area by pooling advertising was supported as a means promoting the area, and sharing expertise on the best deals for energy and other supplies would be taken forward at future meetings. Traders agreed that being part of the national FSB campaign for ‘keeping trade local’ would be helpful.

The number of independent traders in the area means that many decisions can be made locally which will enable the delivery of improvements.

It was agreed that there would be a big tidy up in the first week of December to encourage improvements in the appearance of shops and their displays in the run up to Christmas. There will be events early next year to bring activity to the whole Front Street area.

Problems relating to recent changes in the bus routes were raised as this has disrupted the even distribution of customers into a bunching effect as people leading to over demand at one time, and these will be taken up with the council and bus companies.

The next meeting will be on November 20th at 5;30-6:30om at the Acomb Gateway Centre (former Acomb Primary School on Front Street).