The Council has responded to a Freedom of Information request on accident levels – and recorded vehicle speeds – in the west of York.

This is the district in which it is proposed a wide area 20 mph speed limit will be imposed.

Residents have only got until 21st June to record a formal objection to the plan. This can be done by Emailing highway.regulation@york.gov.uk or 20mph@york.gov.uk 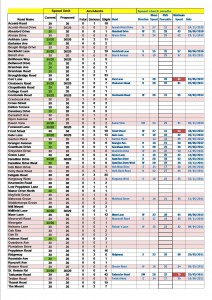 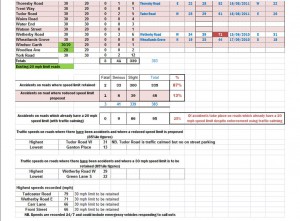 The main argument, used by some Labour Councillors to justify the £600,000 project, is that it will reduce the number of road traffic accidents (RTAs) in the area.

The new figures made available by the Council undermine this claim

The roads with the worst accident records in west York are Tadcaster Road, Boroughbridge Road and Holgate Road

In the last 5 years there have been 383 RTA’s in the area (broadly the Acomb, Westfield, Holgate and Dringhouses wards).

Of these the vast majority (339) have been “slight”. Slight means no or only minor injuries were sustained

There were no accidents at all on the majority of roads which the Council proposes to implement a 20 mph speed limit.

Of the accidents recorded, 335 (87%) occurred on roads where there are no plans to lower the speed limit.

This is not surprising as these are the main arterial routes which are heavily trafficked and where there are potential conflicts at road junctions. Of these accidents, 2 were fatal (both on Holgate Road) 33 serious (6 on Tadcaster Road) and 300 slight.

Only 13% of accidents occurred on roads where it is now proposed to reduce the speed limit. Of the 48 accidents there was one fatality (on Cranbrook Avenue), 8 serious accidents and 39 slight.

Significantly, 95 accidents occurred during this period on roads which already have a 20 mph speed limit (enforced by road humps.) Of these, 9 were classified as “serious”

Average vehicle speeds on roads which may get a 20 mph limit are already low.

The highest was 31 mph recorded on Tudor Road. This reflects the speed that 85% of drivers travel at, or below, when using the road.

More typically the range for the planned 20 mph streets was between 15 mph and 25 mph.

The lowest recorded speed was on Ganton Place (13 mph) although this is a speed typical of many short cul de sacs.

The top recorded speeds were on Tadcaster Road (79 mph), Wetherby Road E (71), Carr Lane (66) and Front Street (66). However the recording devices cover 24 hours a day, 7 days a week, so the figures would include any emergency vehicles responding to calls.

The inescapable conclusion therefore is that the Council is focusing its safety budget on roads where there is little or no accident risk.

Those roads where high speeds may be an issue may already be getting less attention.

Accidents can occur anywhere at any time. The fact that a large proportion of serious accidents are concentrated at particular locations has allowed the Council, in the past, to concentrate its limited resources on addressing the main causes of these accidents.

Often vehicle speeds will not be a major factor affecting accident rates in residential areas. Vehicles reversing into street furniture are an example of an accident where a speed limit has no influence. Similarly a cyclist colliding with a pedestrian is unlikely to be caused by an excessive speed.

The Council should abandon its wide area 20 mph speed limit project and focus resources on roads with high accident rates and/or where there is evidence of drivers systematically ignoring the existing speed limits.

NB. There are currently around 65 KSI accidents occurring in York each year. Of these, less than 20% occurred in west York. Most happen on trunk roads and in the City centre.