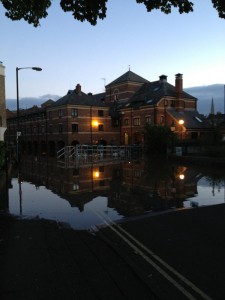 Media reports suggest that the Bonding warehouse is no longer being considered as a possible “media and creative centre”.

Taxpayers will be relieved.

Many residents were aghast last year when the flood prone building was put on a shortlist for the project.

It had been sold by the Council at the height of the property boom 5 years ago but had failed to find a new use. Access during high water levels in the Ouse makes the building inaccessible in its present form.

In total around £3.6 million of taxpayers’ money was earmarked for the project. No convincing business plan has yet been published with earlier estimates suggesting that the private sector would contribute only around 20% of the investment costs.

In the autumn even Labour Councillors began to challenge the wisdom of the project.

It was revealed that taxpayers had already footed a £25,000 bill for the – now abandoned – Bonding Warehouse project.

It seems that the focus of attention for this project is now switching to the Guildhall which has been empty now for 3 months.

There is likely to be more widespread support for the use of the modern office next at the Guildhall as some sort of business centre. Whether the financial figures can be made to stack up remains to be seen.

If the Council is now beginning to jettison some of its more harebrained schemes then they could look again at their proposed £100,000 investment in an “Arts Barge”.

We remain sceptical about the need for any additional arts venue in the City, but it would be better to site any such facility on dry land. The Guildhall might just allow 2 birds to be killed with one stone …. But taxpayers will want to see more convincing evidence that the projects can be self funding.

NB. The owners of the Bonding Warehouse are understood to be pursuing its possible use as a restaurant, offices and flats.