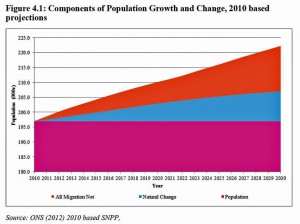 It’s not difficult to see why the York Council was so reluctant to publish the ARUP report on housing needs in the City.

The background documents that the Council is relying on to justify providing 22,000 additional homes – many in the green belt – have now all been published
Click here: (http://www.york.gov.uk/downloads/200396/planning_policy).

In February 2011 the Council agreed a plan which would have seen around 600 additional homes built in York each year. These would have been built on brownfield (previously developed) land such as unused sites previously occupied by British Sugar, Nestle, Terry’s and the railways (York Central).

When Labour won the 2011 local elections they increased this build figure to 800 p.a. before submitting their proposal to central government. That plan also confirmed the draft Green Belt boundaries which had been drawn up more than a decade previously.

In April of this year the Labour Cabinet relied on a secret report by Consultants ARUP to justify an increased target of at least 1200 new homes each year for the next 15 years.

The published report has obviously been re-written for public consumption as it has an edition date of 15th May – long after the Cabinet decision meeting which took place on 30th April 2013. 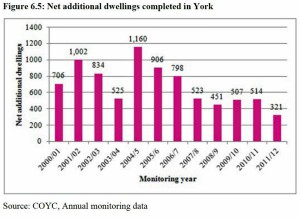 It goes on to confirm that the, long term average for housing completions in the authority for the period 2004/05(the start of the RSS plan period) – 2011/12 was 648 net additional dwellings.

The report confirms (page13) that most of the new houses above that figures will be occupied by immigrants “Cumulatively, this is based on a growth of 36,000 international migrants in the authority within this time period”

It is this that generates a “demand” for 1310 new home per year.

It is then suggested by the report authors that these projections should be reduced to reflect local evidence. They suggest 850 dwelling per year to be more appropriate (which would still imply that 16,000 immigrants would join the York community over the next 15 years).

The independent Office of National Statistics forecast (page 14) a population growth of 1176 pa (600 dwellings), while a later 2011 based study forecasts 700 dwellings.

The York community has benefited from inward migration over the centuries. Immigrants often provide the labour and ideas to move communities forward. However, no City of York’s size would have tried to accommodate such a major population change in such a short space of time.

The consultants conclude on page 18 “As such we believe that such a figure (850 dwellings per year) is in line with the most recent evidence on demographic trends, and in particular levels of migration. We therefore believe that adopting such an approach would mean that the area is meeting objectively assessed needs”. 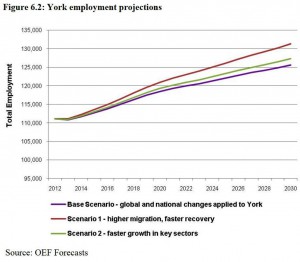 ARUP conclude that we are likely to see a growth of between 800 and 960 jobs per annum over the next 15 years.

A higher growth rate has been assumed by the Council’s Cabinet in certain job sectors such as finance and tourism.

It is this that leads to the claim that at least 1090 new homes per annum are required.

Dealing with the affordability of homes the report concludes that this cannot be done by applying quotas on commercial developers. They say (page 34) that achieving even 850 new homes per year will be “highly challenging” given that the current figure is around 463.

They then proclaim the death knell for the Green Belt,

“This could include considering if there are any sites that are not constrained and which would be attractive to the market, for example this could potentially include some greenfield sites in the right locations. The application of a less constrained land supply may help to increase the level of completions in the district in the short term” 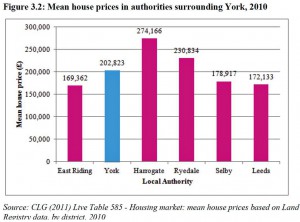 In other words agricultural value land would be released from the (draft) Green Belt and sold at – Labour hope – discount rates to developers.

It matters little to Labour politicians that this land is vital to the setting and character of the City and local communities.

They entirely fail to appreciate the consequences for public services of high growth demand with transport, health and education all likely to reach breaking point.

They are prepared to gamble that more housing will be provided and that some of it will be affordable.

It is a reckless ill considered approach which could blight the City for decades.

Residents have until 31st July ot record their objections to the proposals. Complete a form <strong>”on line” here or email localplan@york.gov.uk or post them to Local Plan, City of York Council, FREEPOST (YO239), York YO1 7ZZ