An application for significant changes to the Grade II listed Art Gallery in York have been received by the Council.

The changes include internal and external alterations comprising an additional gallery floor, the erection of an extension to create a new gallery area, the creation of a new balcony and replacement windows together with the demolition of a single storey extension and part of a roof as well as internal demolition works and removal of partitions

The reference number for the application is 12/02509/LBC and details can be found on the following web site http://tinyurl.com/York-art-gallery

York Art Gallery is a Grade II listed building and is close to 24 other “Listed” buildings in what is one of the most sensitive parts of York’s historic streetscape. 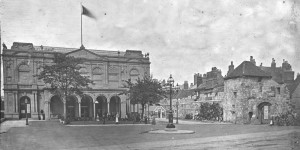 The Art Gallery was constructed between 1874 and 1879 as part of a Yorkshire Fine Art & Industrial Exhibition. A site was acquired from the York Philosophical Society within the walls of the St Mary’s Abbey precinct known as ‘Bearpark’s Garden’, in use as gardens at the time of acquisition (previously used as nursery gardens by Edward Bearpark).

The proposal for the construction of the exhibition building was formally launched to the public on 16th March 1876. The cost of the building at this time was estimated at £10,000 and acquisition of the site at £5,000.20 This first scheme was in the ‘Elizabethan’ style. However, it was not considered sufficiently ornate and a further scheme was developed in the ‘Italian’ style. This change in design increased the estimated costs of the construction to £19,000.

Construction of the Yorkshire Fine Art and Industrial Exhibition, York, began in January 1878. The foundation stone for the building was laid on 22nd April 1878 by the Lord Mayor of York and the building was opened just over a year later on 7th May 1879.

Constructed for the Exhibition in 1789, the building continued to be used for a variety of purposes, including lectures, concerts, performances, and events such as boxing, bazaars, displays, prize givings and exhibitions. The building was also tenanted by the School of Art.

An interesting history of the Art Gallery site can be found here http://tinyurl.com/history-of-art-gallery

Consultation on the planning application will continue until 24th August. A decision is expected in September.

If approved, the Art Gallery is likely to be closed for 12 months while the works are undertaken.