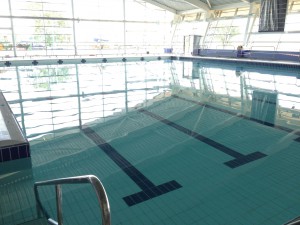 York Sports Village will revolutionise sporting facilities in the City, according to the councillor who was responsible for securing the agreement to fund the project.

The £9 million state-of-the-art facility at the University of York’s Heslington East campus, which is due to open next month, will feature an eight-lane swimming pool, a full size 3G Astroturf pitch, three five-a-side pitches, a 100-station computerised fitness suite plus sauna and steam rooms.

Agreement for the Sports Village was secured under the Liberal Democrat administration on City of York Council in 2010 and was originally opposed by Labour Councillors. The Council agreed to contribute £3 million to the project with the University contributing £5 million and the remainder being allocated through sporting grants.

Councillor Nigel Ayre, Liberal Democrat Cabinet Member for Leisure when the Sports Village was agreed, toured the site last week to check on progress. After his visit, he commented:

“Securing funding for new pools and facilities, in the face of opposition from Labour, was one of the finest achievements of last Liberal Democrat administration and will provide a lasting legacy for the residents of York. In 2003 York had 3 crumbling pools with one facing closure, thanks to long-term vision we will now have two brand new pools and over £1 million invested in the other. For the first time ever York will have an 8 lane swimming pool suitable for competition. All of this has been achieved while reducing the annual cost to the council. The Sports Village, along with the new Community Stadium, means that our residents, sport teams and student clubs will now get the world class facilities that they deserve”

With only a few weeks to go before the Leisure village is opened residents can find out more details on their web site. http://www.york-sport.com/york_sport_village.php