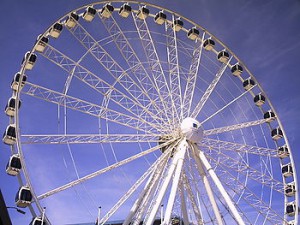 Council officials are recommending that planning permission be given to installing a 53 metre diameter observation wheel in front of the Royal York Hotel. It would be in place on a temporary basis until January 2013.
The Wheel was removed from its previous home at the Railway Museum because the operators claimed that low footfall – particularly during the winter months – made it uneconomic.
Plans to put the Wheel in locations at St Georges Field and then, later, to the rear of the Art Gallery came to nothing 12 months ago.
The site at the Royal York is sure to be controversial with fears from some Westgate flat residents that they will be “overlooked”.
However it is the impact on York’s historic walls and streetscape that will cause most concern.