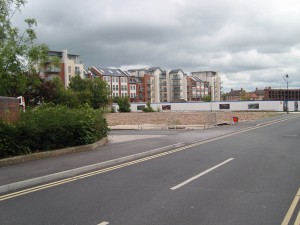 With the Council apparently set to sell the Kent Street coach park for a knock down figure and claims in the media that they have agreed to off load the Union Tce car and coach park for a miserly £2 million, one wonders whether they will also go ahead with the sale the 100 space Haymarket car park?
Traders will be very concerned if 280 car parking spaces and around 80 coach spaces were all to go at the same time.
Critically though it would jeopardise the £600,000 that the Council receives in car parking revenue from the car parks involved, leaving a big gap in next years budget.
Some motorists might use other Council car parks but the big gainers could be the privately operated car parks at Tanner Row and Garden Place.
One short term option, which would bring in more income for the Council, would be to extend the Haymarket car park onto the redundant land next to it – which used to house the ambulance station (see photo).
With room for about 70 cars there it could generate around £100,000 a year in badly needed income.