In reponse to a request made under the Freedom of Information Act, the Council has provided a list of the number of issues raised by Councillors over the last 4 years.
The numbers against my name are inflated by the fact that I take responsibility for emailing to Council officials most of the issues that residents raise on our survey forms and “grumble sheets”.
The figures only cover those issues which enter the system officially (emails and telephone calls to the central issue and complaint handing teams).
There may be others, for example where a Councillor talks direct to an official or raises an issue at a meeting, and which are not formally recorded.
Details of the source spreadsheets can be obtained from the Council by Emailing foi@york.gov.uk 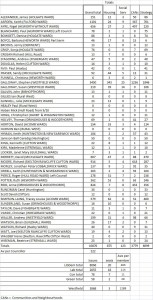 One thought on “Issues raised by York Councillors”