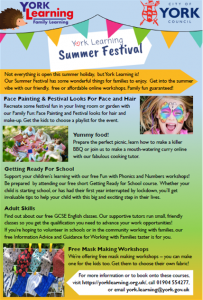 The Council will consider an update report tomorrow on how well its York Learning (further education) service is performing. Not surprisingly, courses have been interrupted with many of the venues used by the service not being available for hire.

The Council produced a “Shine” booklet recently outlining what was available this summer. Mainly aimed at families, it can be accessed by clicking here

Much of the York Learning’s £3 million budget is spent on providing educational opportunities for disadvantaged groups.

It reveals that events such as “job fairs” have been shelved in the wake of the health scare. Given the likely increase in unemployment in the City, providing services like this must have a high priority even if they have to be established initially on a “virtual” basis.

Reskilling the workforce will be a challenge as the City – and country – tries to emerge from recession. Judging by the published report, York Learning has yet to adapt its priorities to address that challenge.

The report reveals a decline in student numbers – including refugees – undertaking English language courses. This is partly explained by the lower number of inward migrants to the area. Some courses are also now available on line using “zoom”.

The report to the meeting acknowledges that during recent months some residents have become more isolated than they needed to be because of lack of IT skills. Many services were only available “on line” during the crisis and libraries were closed.

Filling that skills gap is a top priority for the service

The learning team have been criticised in the past for being slightly remote from local communities. Residents Associations rarely receive any information about upcoming local activities.

The Council will need to engage more effectively in the future if those in greatest need of skills training are to receive  the support that they need.

York Learning (part of City of York Council) is hosting their first ever Summer Festival, offering residents a variety of fun and uplifting activities for the whole family.

Taking place throughout August, residents will have the opportunity to perfect their skills or learn new skills with a series of classes ranging from foreign language to mask-making; painting to dancing; or BBQ cooking to photography.

This year, the festival will have a special focus on supporting local resident’s wellbeing. York Learning will be offering Pilates, Yoga, Tai Chi, Dancefit workshops and mindfulness classes designed to help people come to terms with the impact of the coronavirus pandemic.

There will also be the chance to prepare fun ways to get your kids ready for school, perfect your writing skills and enjoy fun-filled family activities. All Summer Festival courses and workshops are available to pre-book online at www.yorklearning.org.uk.

York Learning has been offering an extended range of online classes for all to enjoy during the coronavirus outbreak, and will continue during the summer holiday period.

To see all the Summer Festival workshops and courses, visit www.yorklearning.org.uk and keep an eye on the York Learning and Family Learning Facebook pages, Instagram, and Twitter.