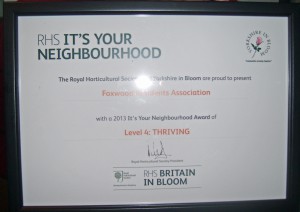 The Foxwood Residents Association has been awarded a prestigious Britain in Bloom award.

They have been named as “Thriving” in the It’s Your Neighbourhood category of Yorkshire in Bloom.

It is only the second time that the Association has entered the competition.

They were particularly praised for the work that they did on the “Garden of the Year” competition.

It appears that the decision that York would not enter the Britain in Bloom contest this year was only taken in July. 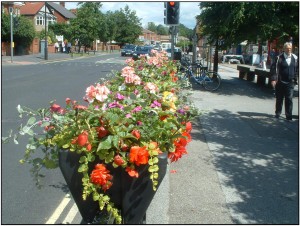 The City has already been entered into the competition.

The decision was taken in private with no report on the implications being published.

Neither residents nor those involved in Britain in Bloom at a community level were consulted.

The village and neighbourhood entrants are however understood to continuing with their entries. Judging is underway.

Offers of voluntary help to organise the City’s entry were snubbed.

The late withdrawal meant that no other Yorkshire City was able to enter to represent the county.

It appears that the decision was a panic move taken only days before the Britain in Bloom judges were due to visit the City.

Although the Council says it may enter again in the future, it could take 5 years or more to build up the momentum needed to be awarded the Britain in Bloom City title.

Meanwhile the decision to squander £75,000 a year on advertising at Leeds Bradford Airport has been “called in” for reconsideration. The review meeting will take place on Monday 16th September. The agenda can be found by clicking here. 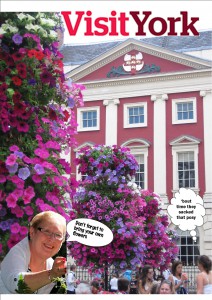 The media are reporting that York has pulled out of the Britain in Bloom competition.

The responsible Councillor (Crisp) is quoted as saying that the City is “taking a breather from the event“.

The decision to pull out has not however been discussed by the Council and was unknown to the many hundreds of volunteers who have been preparing individual entries for the competition.

In 2011 the Council Leader was quoted, when trying to justify a £1000 travel bill incurred by a delegation- led by Cllr Crisp – to the Britain in Bloom national awards ceremony in Scotland.

He said then that Britain in Bloom success had “boosted York’s reputation”.

He went on to say:

“Events such as this have possible economic benefits in creating collaboration between different councils, which can produce more significant savings in the future.

“Such political attacks will not deter the cabinet from doing our job properly by increasing our influence, and this will inevitably cost a modest amount”
Ironically, The City’s good showing in 2-011 was down to the hard work of the previous LibDem administration that had gradually restored the City’s reputation for flora displays.

The announcement of the pull out comes only days after the council said that it was to spend £75,000 a year advertising the City at the Leeds-Bradford airport.

Work on a £500,000 project to relay paving stones in Kings Square also starts next week.

Cllr Crisp was unable to say how much pulling out of the Britain in Bloom contest had saved the City but tourist chiefs said it was another blow to the City centre economy.