Pop in to the York Explore Library foyer to see a selection of our original WWI archives on display in our exhibition case.

From Chocolate letters to Conscientious Objectors to photographs of air raid damage this collection highlights the local impact of WWI on the city.

This Clements Hall Local History Group exhibition shows the impact of the War on South Bank, Clementhorpe and the Nunnery Lane areas of York.

Free publications available: a newspaper with local stories, a map/guide, and a booklet on Scarcroft School in the War. 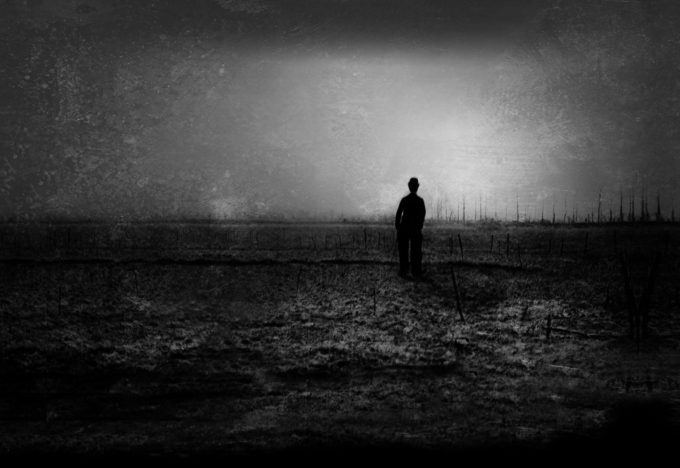 The installation, orchestrated by Sound&Fury, shows how hospital staff at improvised wartime hospitals would screen Charlie Chaplin films to injured soldiers in an effort to boost morale.

Sound&Fury’s intimate, immersive and immensely powerful sound installation places audiences in the heart of a makeshift wartime hospital, where an unlikely therapy brings solace and comfort to those injured on the battlefield.

Some say that British soldiers in the trenches held up cardboard cut-outs of Charlie Chaplin’s tramp in the hope that the enemy would die laughing. But as the carnage of war set in, Chaplin’s image was put to a different use. To boost morale, medical staff at improvised hospitals near the front line arranged for Chaplin films to be shown for the bedridden, with the ward’s ceiling serving as the silver screen.

For one soldier on Charlie Ward, the flickering images, whirring projector and Chaplin’s perfect comic timing trigger complex emotions and memories. Cast from the trenches to childhood, from trauma to dreams, the hospital film show sets him on a journey into a personal no man’s land.

Charlie Ward is a sound installation lasting around 15 minutes and presented to audiences of just 10 people at each performance.

Premiering to great reviews in 2014, the immersive art installation has been described as “hauntingly beautiful’ by The Telegraph and ‘genius’by The Times.

The installation is being shown as part of ‘York Remembers: Lifting the shadow of the First World War’, a remembrance project launched by City of York Council. The project will see over 70 events, projects and exhibitions hosted in the city this autumn.

Co-commissioned by 14 – 18 NOW WW1 Centenary Art Commissions and Fuel Theatre, the Charlie Ward sound installation will be on display at the York Army Museum 25 September – 4 October in honour of the centenary.

The sound installation is 15 minutes in duration and is presented to audiences of seven or less per performance.

Councillor Keith Aspden, executive member for economic development and community engagement, said: “The Charlie Ward installation allows us to experience memories from the First World War and invites the audience on this intimate and moving tale.”

“The installation is suitable for all ages and is a wonderful way to get people involved in the city-wide programme; York Remembers, which commemorates the centenary and those who fought throughout the War.”

Allison Freeman, activities officer at York Army Museum, said: ‘We are looking forward to hosting such a unique experience as Charlie Ward at the museum. This immersive and immensely powerful sound installation places audiences in the heart of a makeshift wartime hospital, where they can experience the story and memories of a WW1 soldier.’

Full details of the York Remembers programme are available at www.york.gov.uk/WW1Commemorations

In Westfield, Councillors have been consulting on installing a “Tommy” figure (on a temporary basis) next to the War Memorial on Acomb Green.

The tommy art installation has seen silhouettes of First World War ‘tommy’ soliders appearing at locations across the country, including at the Tower of London and on the Giant’s Causeway in Northern Ireland.

The installations are a poignant reminder of the 888,246 British and Commonwealth soldiers – 1447 men and women from York – who died and of those who survived but suffered physical and mental scars. The silhouettes will tour the nation until Armistice Day to raise funds for a new charity called Remembered.

York’s tommy statue has been placed outside the customer entrance to West Offices, Station Rise.

The official programme for York remembers: Lifting the shadow of the First World War is available online at www.york.gov.uk/WW1Commemorations

The money raised from the tommy statues will be shared evenly between The Royal Foundation: Heads Together, Walking With The Wounded, Combat Stress, Help for Heroes: Hidden Wounds, The Commonwealth War Graves Foundation and Project Equinox: Housing Veterans.

For more information on the there but not there campaign visit www.therebutnotthere.org.uk/

In Westfield residents have giving their views on how the Acomb War Memorial gardenson The Green could be improved.

Work is progressing on repairing the stonework on the Acomb War Memorial itself. The work, being undertaken by the Civic Trust, is expected to be completed by 11th November.

In a survey local Councillors asked what other improvements might be made.

The most popular suggestion was the provision of an interpretation board. This will be pursued if a sponsor comes forward. The cost would be around £1500.

The second most popular suggestion was the extension of the paving to form a path to the memorial from the entrance. At the moment access for wheelchair users is awkward.

Also popular was a proposal to crown thin the trees on the site. This would allow more sunlight into the garden and prompt more flower growth.

Both these suggestions are being followed up with the intention of the work being funded by the ward committee.

Tow other suggestions are under review.  The WW1 Centenary “Tommy” figure  (a silhouette of a soldier on perspex being promoted by the Royal British Legion) was intended only for a temporary display to mark the end of WW1.

Provision of a centenary seat attracted concerns from some residents who thought that it might become focal point for anti social behaviour. 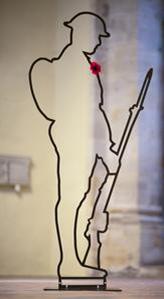 In honour of the 100th anniversary of the First World War, local children and young people are being encouraged to submit commemorative poems as part of a York Army Museum competition.

The competition is part of ‘York Remembers: Lifting the shadow of the First World War’, a remembrance project co-ordinated by City of York Council, and which schools and individuals aged 7 – 18 can enter.

The poem should be an original piece on First World War remembrance.

Children’s poems should be no longer than 28 lines, while poems submitted by young people should not exceed 40 lines. Entries can be hand delivered, sent to the York Army Museum by post or emailed to yorkrememberspoetry@gmail.com by 12 noon on Friday 28 September.

Winners will be announced on National Poetry Day, Thursday 4 October at Explore Acomb Library by York poet, Doreen Gurrey, and will receive a book token and certificate in each category.

Allison Freeman, activities officer at York Army Museum, said: ‘We are excited to be hosting the York Remembers poetry competition for children and young people, and looking forward to reading the submitted poems.  We are especially pleased that York poet, Doreen Gurrey, has agreed to judge this competition commemorating the ending of the First World War.’ 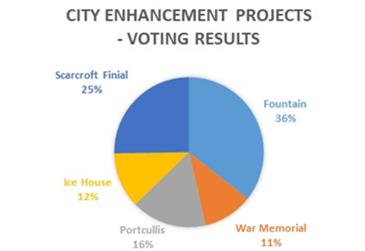 The city-wide project will commemorate the 100 year milestone and reflect upon the horrors of war, remembering the 37 million military and civilian casualties of the First World War.  York Remembers will explore a diversity of perspectives on the causes and consequences of the war and explore how we can learn the lessons of the past to help build peace in the future.

Key events for this year’s anniversary commemorations include:

Volunteers from GoodGym will be starting work on tidying the area around the 12 WW1 graves in St Stephens cemetery on Monday from about 6:30pm

This from the York City Council,

“City of York Council is joining forces with the Rotary Club of York – and partners across the city – to launch a new scheme which will see thousands of trees planted across York: one for every child born in the city over the next 12 months.

Every parent registering the birth of their child through York Register Office will be offered the chance to get involved in the scheme at no cost to them. Parents will be asked to send their baby/babies’ names to www.yorkrotary.cvo.uk/tree-partnership. 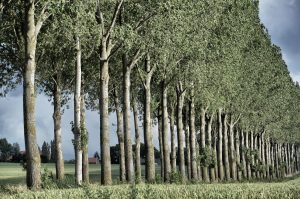 A tree will then be planted on land owned by York St John University and Joseph Rowntree Housing Trust to commemorate their arrival.

Around 3,000 children are born in York each year and it’s hoped that the majority of parents will want to get involved in the scheme. The trees planted in York are part of 47,000 Rotary UK are aiming to plant across the country over the next 12 months”

Shame that the Council doesn’t manage its existing tree stock on public land with the same enthusiasm.

They also remain stubbornly aloof from the proposal that an avenue of trees be planted on rural Askham Lane to commemorate the end of WW1.. END_OF_DOCUMENT_TOKEN_TO_BE_REPLACED

Have you always wanted to research your First World War ancestors but are not sure where to start? Why not join our Archivist Laura Yeoman as she talks you through some of the sources you can use, both onsite at York Explore and online. Following the talk there will also be an opportunity to get your questions answered. 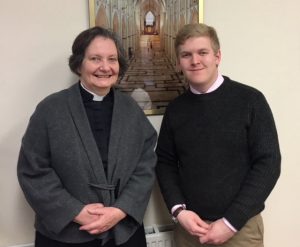 As we approach the centenary of the end of the First World War, a launch event will be held later this year at York Minster, to mark the beginning of York’s 6 week period of remembrance to Armistice Day.

The event will take place on the 3rd October 2018 and will be specifically aimed at key stage 2 pupils, so that they can learn how the events of WW1 affected York.

The event will include a variety of military displays around the Minster and live music, with veteran personnel and civic representatives in attendance. Invitations are being sent to schools across York this week and a special educational pack is being developed to help students prepare for the event, including a special composition by Dr Richard Shepherd MBE DL. There will also be a summer long poetry competition, open to all key stage 2 pupils across York, with sessions running in the summer holidays to support children to make an entry.

First York are supporting the event by allowing schools not within walking distance to the Minster to use their service busses free of charge.
END_OF_DOCUMENT_TOKEN_TO_BE_REPLACED