The land is part of Clifford’s Tower car-park and was originally part of a package to support English Heritage plans to build a £5.2m visitor centre at the foot of the tower.  English Heritage announced their intention to stop development plans after the council revealed plans for Castle Gateway”.

“English Heritage have made clear they no longer plan to build a visitor centre at the foot of Clifford’s Tower.  After English Heritage announced their intention to no longer proceed, residents told us they were concerned construction could still go ahead as planning was still in force.  As a result we have decided to review the offer of leasehold of the land making it clear that the original visitor centre plans will not go ahead.    We remain committed to working in partnership with English Heritage about this important site and it is hoped that the Executive will decide not  to proceed with the land sale.” 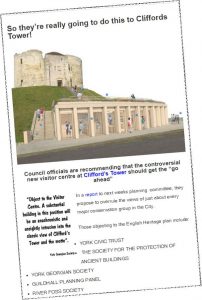 Plans to construct a visitor centre next to Clifford’s Tower have been dropped.

The English Heritage plan attracted major opposition from a wide range of organisations and people in the City.

One independent Councillor (Jonny Haynes) even challenged the proposal though the courts.

Now the new head of English Heritage in the north of England is being reported in the media as saying that the plan has been scrapped.

Generally the other proposals for Clifford’s Tower sponsored by EH were welcomed. These included improvements to internal accessibility and repairs to the buildings fabric. In principle, many acknowledged that a visitor centre would enhance the experience for the tourist but the location of the building, immediately adjacent to the iconic mound, was considered by many to be overly intrusive.

The decision offers the opportunity to provide something more appropriate as the Castle Car park area is remodelled over the next few years.

The Clifford’s Tower controversy was one of several lapses of judgement by the York planning committee in recent years. They also nodded through a plan to establish an Arts Barge bar near Skeldergate Bridge despite concerns about alcohol and river safety.

However, in most peoples minds, that will pale when compared to the major blunder made in giving planning permission to  “Container Village” currently blighting the appearance  of Parliament Street.