When leaving your vehicle we urge residents to remove any valuables from your vehicle and ensure that all doors are locked and windows are closed. 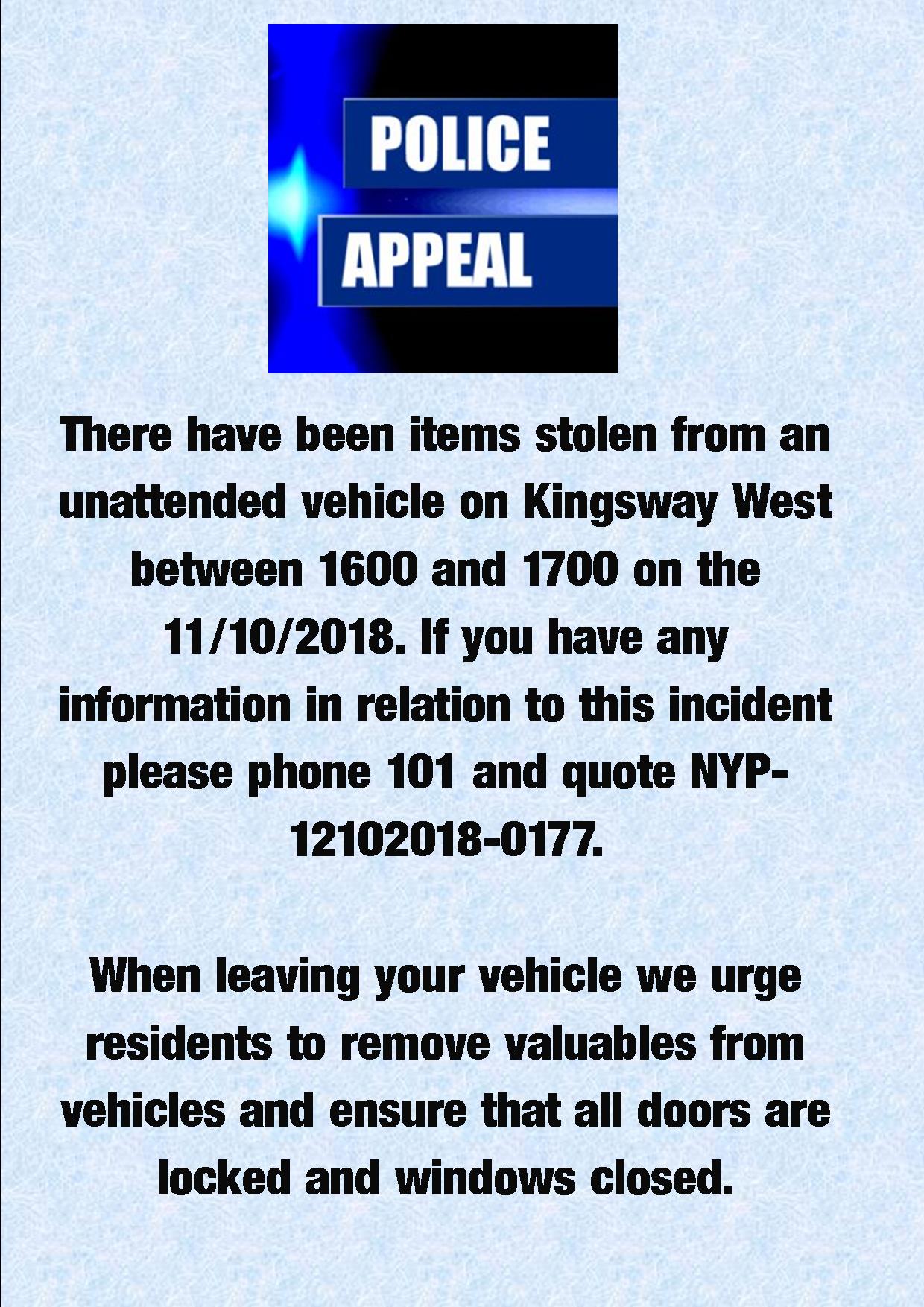 If you witnessed anything suspicious that would assist the police with their enquiries please call 101 stating the following incident number – 12180184144. 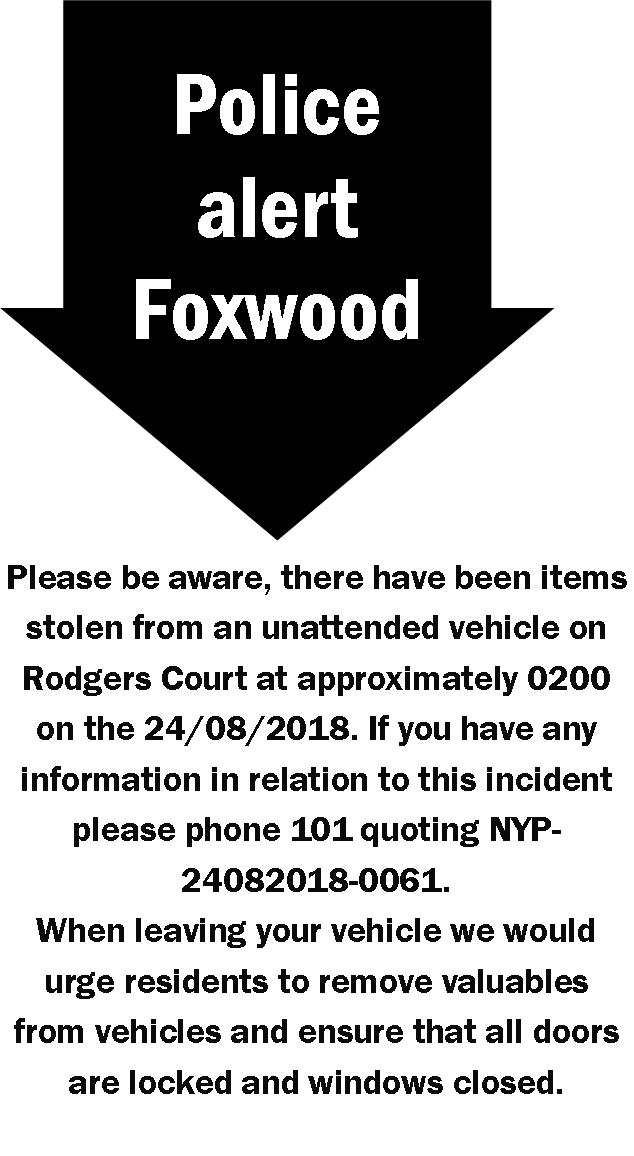 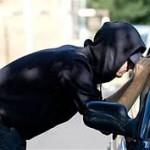 A man from Merseyside has been arrested after a report of thefts from vehicles at a garage in York.

Police were called at 12.45pm on Thursday 21 January 2016 with a report that a number of satnav memory cards had just been stolen from several vehicles at a garage on the York Business Park.

Officers immediately began a search of the area, and at 2pm a suspicious vehicle was stopped near Appleton Roebuck.

Items of suspected stolen property were recovered from the car, and the driver, a 27-year-old man from St Helens, Merseyside, was arrested on suspicion of theft from a motor vehicle.

He has been released on bail, with conditions not to enter North Yorkshire, as police enquiries continue. 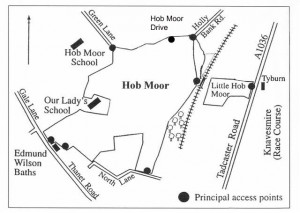 At about 8.50am on Tuesday 15 December 2015, the victim was walking along the track on Hob Moor Fields towards York, when he was approached by two men who were walking in the opposite direction, towards Acomb.

One of the men put his arm out and stopped the victim, and asked him to hand over any money or his watch. When the victim hesitated, he asked him again. The victim complied and handed the man £18 and his watch. Both of the men then ran off in the direction of York.

The first man is described as white, aged in his early twenties, 6ft 2ins tall, athletic build and broad shoulders. At the time of the incident he was wearing a black Adidas hoody which was pulled up over his head, light grey tracksuit bottoms and black trainers. He had an Irish accent.

The other man is described as white, aged in his early twenties, 6ft tall and average build. He had the lower half of his face covered with possibly a black scarf and only his eyes were visible. He was wearing a black hoody which was pulled up over his head, loose fitting blue jeans and black Nike trainers. He had a Yorkshire accent.

PC Amanda Popely, of York Police, said: “I am asking for witnesses who saw anyone in the area of Hob Moor Fields at the time to contact the police, as they may have important information that could assist the investigation.”

If you have any information about the theft, please contact North Yorkshire Police on 101, select option 2, and ask for PC Amanda Popely or York Police. You can also email amanda.popely@northyorkshire.pnn.police.uk. If you wish to remain anonymous, you can pass information to Crimestoppers on 0800 555 111. Please quote reference number 12150221963 in connection with this incident.

The Police say, “We are conducting enquiries and are requesting the public’s assistance to help identify the owner of two Silver crown coins that were recovered from a recent search conducted by North Yorkshire Police.

In particular, we are appealing for information in regards to any possible victim of the theft of these items.

Anyone with information that could assist the investigation should contact us on 101, select option 2, and ask for PC 1681 Andy Chapman. You can also email andrew.chapman1681@northyorkshire.pnn.police.uk

Police investigating the theft of a number of dogs who were found at a property in Kelfield near Selby have thanked members of the public for their response to the appeal.

PC Sarah Ward of Selby police, said: “We have had an overwhelming response to our appeal to find new homes and to try and find their rightful owners.

“Sadly, we have not been able to find any of the original owners of the dogs. This is mainly because most of them were not chipped. A number of people have come forward, believing some of the dogs were theirs, but after checks were carried out, sadly for them, the dogs have turned out not to be theirs.

“However, the good news is that we have found new homes for all 19 dogs. Although, they will not be handed over to their new owners for a week, just in case any further potential owners come forward.

“People have been brilliant and incredibly generous. Many people who were not in a position to adopt a dog, have called at the kennels and donated food for them.

“I would like to thank everyone for their kindness, I honestly did not expect such a huge response to our appeal, but thank you so much.”

To recap, police originally seized 23 dogs, however four ave been returned to their rightful owners leaving 19 homeless. The remaining dogs are being cared for by Woodhaven Kennels in South Milford.

The owner of a property in Kelfield near Riccall contacted the police after the animals were abandoned there.

The dogs have not necessarily been stolen from the North Yorkshire area, they could have been taken from the surrounding areas or anywhere in the country. There is no suggestion that any of the dogs have been mistreated and our investigation relates only to alleged theft and fraud offences. Due to the ongoing investigation, we are only able to release limited information.

Police are appealing for information following a theft of £7000 worth of rings from an antiques shop in York.

A dark brown velvet display tray holding 27 rings was taken. The rings have a total value of around £7000 and are quite distinctive, particularly a diamond ring with an especially high setting.

Anyone with information which could assist in this investigation should contact North Yorkshire Police on 101, select option 2 and ask to speak to PC 1843 HUGHES of Fulford Road police station, York.  Please quote reference – 12150152511.

If you wish to remain anonymous information can be passed to Crimestoppers on 0800 555 111.

Police are urging owners of Land Rover Defenders to be on their guard against vehicle thieves, particularly in rural areas.

The warning comes after a number of thefts and attempted thefts involving the vehicles in North Yorkshire.

·         An attempted theft of a Land Rover was reported in Gargrave, overnight 26 / 27 February. The vehicle was found down the street, having been stopped by an immobiliser.

·         A twin cab green Land Rover, registration number YC62 WTG, was stolen from Ickornshaw, near Cowling, in the early hours of 23 February. Anyone with information on its whereabouts should call 101 and ask for PC James Dykes, quoting reference number 12150029982.

·         There have also been attempted thefts just over the border in other police force areas.

Police are appealing to owners to be vigilant around keeping these types of vehicles as safe and secure as possible, and are also asking members of the public to report any suspicious activity involving Land Rovers.

PC Clare Mayes, of Thirsk and Easingwold Police, said: “I am urging Land Rover owners to be on their guard, and ensure they have adequate security measures in place – and of course this advice applies to any make of vehicle.

“Land Rovers should always be locked and alarmed. Park in a locked garage or other locked secure area, or in a well-lit open space or where there is passive lighting. Don’t leave keys in the ignition or near the front door at home.

“Consider also fitting a transponder-based security marking system and tracker device, and etching all windows with your vehicle identification number. In addition, if your Land Rover is over ten years old, fit an alarm and either fit an immobiliser or use a steering wheel lock.”