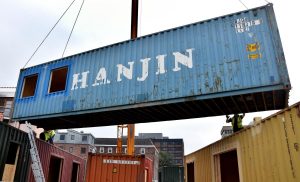 Containers being installed on 4th September

A response to a Freedom of Information request, recorded with the City of York Council on 15th November, has revealed irregularities with the lease for the site on which the containers were installed at the beginning of September.

It has emerged that the operator Sparks had, and still has, no lease for the site.

A “tenancy at will” was signed as recently as 9th November 2017.

In effect the company was able to park their assets on Council land for 2 months without permission or payment. 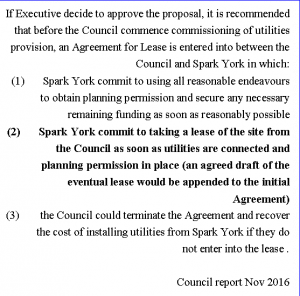 In November 2016 the Council’s Executive had agreed to lease 17/21 Piccadilly for the storage container village. The development was to start trading in May 2017 and the lease would expire in June 2020. The Council agreed to stump up £40,000 to cover the cost of providing water, electric and gas supply.

The Council was to have had a representative on the Sparks Board to look after its financial interests.

The Council expected to receive a basic rent plus a 30% share of “profits” (sic). The minutes of the meeting were clear that a lease (and hence rent payments) had to be in place to underwrite any Council investment.

A year later and the development has not been completed. No lease is in place. The Council has received no rent payments. No business rates have been paid on the site. 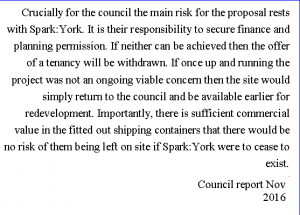 The containers have yet to be fitted out.

However, it has also emerged that the Council has already spent £31,500 (of the £40,000 budget) on facilitating the development.

Sparks has said that the earliest the container village could open is in March 2018. That would leave just 2 years for the Council to recover its investment.

Later this week a Councillor will be asked to extend the area to be covered by the lease to Sparks.  The area has most recently been used for car parking.

No additional payment is being sought from the developer for the extra land. 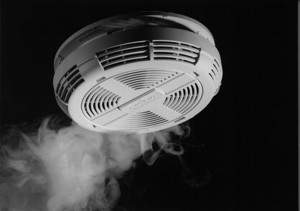 To offer greater protection to tenants in the private rented sector, from 1 October, a new law requires that private landlords must fit all of their properties with smoke alarms by this date.

The law (Smoke and Carbon Monoxide Alarm (England) Regulations 2015) says that a working fire alarm must be fitted on each storey with a room which is wholly or partly used as living accommodation.

While the law says that it’s the landlord’s responsibility to make sure the alarm is working when a tenancy starts after the 1 October, tenants must regularly check that it is working. If it is not and it is a battery-powered detector they should change the batteries or let their landlord know if it is a mains wired alarm.

The law also says a carbon monoxide alarm must be fitted in any room which has a coal fire, wood burning stove or similar solid fuel burning appliance, and where the room is partly or wholly used as living accommodation.

The landlord or manager of a property failing to meet the new regulations could face a fine of up to £5,000.

Please contact the Council’s Housing Standards and Adaptations Team at housing.standards@york.gov.uk or on 01904 552300 if you have any concerns.

Ways to tackle tenancy fraud will be top of the agenda at the region’s first tenancy fraud conference, hosted by Veritau, City of York Council’s fraud investigation service at West Offices, York on Tuesday 10 March 2015.

There, 32 social landlords will be attending the Tenancy Fraud Conference, organised on behalf of the Yorkshire and Humberside Tenancy Fraud Forum.
END_OF_DOCUMENT_TOKEN_TO_BE_REPLACED