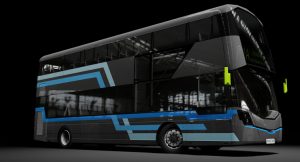 Most modern looking bus in York since underrated ftr scraped.

A modern double deck bus is being used in the City at the moment. It replaces some hybrid models which have been sent to Ireland for modification.

It was operating on the number 4 route earlier today.

The new bus is understood to be a Wright Streetdeck. It has stop/start technology to reduce carbon emissions.

Controversial New Routemaster bus in London. Hybrid technology but now overtaken by “all electric” vehicles. Problems with high temperatures on the top deck and now doors stay closed on “jump on fall off” rear platform

The latest Streetdeck model uses some of the technology which was deployed on the London Transport “New Routemaster” a couple of years ago.

Wrights says that  “The ride characteristics of the new StreetDeck are excellent thanks to advanced axle and suspension systems.”

“An improved airflow throughout both salons has been achieved, along with reduced solar gain in the upper saloon. Whilst improvements in areas such as cab door lock design, wireless bell pushes and revised hand pole fixings illustrate the attention to detail that has characterised the whole product development programme”.