With the Council continuing to face significant financial challenges, City of York Council has stepped up its regional and national lobbying efforts.

The lobbying will urge the Government to seize the opportunities that are unique to York and make the city an ‘exemplar’ of driving recovery.

Since the pandemic was declared, the Council has seen demand for services increase, whilst at the same time, income has considerably fallen.  Early indications suggest that the Council is facing a £23 million* shortfall in its budget.  Over recent months, in addition to Government support, the Council has prioritised resources to support the most vulnerable in the city, as well as invested over £2 million to create local emergency funds to support the city’s businesses and residents facing financial hardship.

There are opportunities unique to York that if taken will help kick-start the economic recovery of the region. Recently it was agreed that the Council, with its partners, would develop a 10-year City Plan to enable York and the region to build back better by drawing on the city’s strengths; from utilising the biotech industry in the city, to seizing the once in a lifetime regeneration opportunity in York Central.  It is clear that, with further funding, York can go far in driving the recovery of our city and region.

That is why to truly build back better, City of York Council is urging the Government to make York an exemplar of how to lead ‘recovery’ in the North of England and the funding needed to unlock York’s potential and build on the work already taking place in the city.  With additional funding, City of York Council could:

The campaign will support and link up with the work of other organisations and Councils who are lobbying for further funding for local authorities, including the Local Government Association, the Association of Directors of Adult Social Services, IPPR North, the Association of Directors of Children’s Services and more. As part of the campaign, City of York Council will also be producing a submission to the Government’s Comprehensive Spending Review, outlining the financial challenges for the Council, and highlighting the opportunities to invest in the city in partnership with the Government.

*The Council has not updated its budget forecast. Most of the speculative income loss relates to lower Council Tax and Business Rate income, although car parking income is down (and likely to remain so as long as parts of popular car parks remain bollarded off). The Council still intends to borrow increasing amounts of money and has made no announcements regarding any savings strategy. 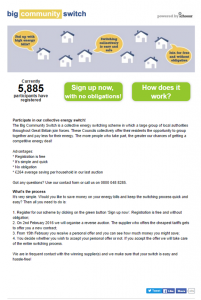 City of York Council is encouraging residents to see if they could save money though 2016 and beyond by switching their gas and electricity providers.

Residents can join the switch until Monday 1 February. Over 200 residents took part in the latest switch with people saving on average over £215.

Jacqui Warren, Sustainability Officer, said: “The Big Community Switch is a great way for people who might be considering changing their energy suppliers to see if they can reduce their energy bill, with residents saving on average £215 during the previous switch.”

How the switch works:

1. The switch is open for registrations from 5 January to 1 February 2016. Anyone who pays a household energy bill can register for free, including pre payment meter customers and those without gas. Registration is easy – you just need a recent fuel bill or annual statement.

2. The council’s switching partner iChoosr will hold an ‘auction day’ on 2 February and invite energy companies to offer their best prices.

3. The cheapest tariff wins! Residents will receive an email with details of the new tariff secured by the scheme and how much money could be potentially saved. This will be after 12 February 2016.

4. Residents will have until 14 March 2016 to decide to accept the offer or not. There is no obligation to accept and no fees or charges. If residents choose not to take up the offer, they can still register again in future schemes.

The Council has revealed details of a new staff structure in its “learning” team. The restructure is aimed at saving £284,000 a year in staffing costs and has been influenced by the conclusion of some Europe funded projects.

“Many of these savings are coming from reduction in management posts, but there will also be some savings in direct service delivery, including reductions in some teaching staff, reductions in employability programmes and provision to support mental health issues.

These reductions are going to have a serious affect on the service’s ability to support individuals seeking work and those who require help with recovering from mental health issues”.

The decision was taken at a “behind closed doors” meeting held on 21st December.

.@libdems fought for a £800 tax cut for 25m British workers and have delivered it http://t.co/r6CqDRLuw7 #Budget2014 pic.twitter.com/B9FddIRBxp