Police in York are appealing for witnesses and information about a road traffic collision on Boroughbridge Road.

It happened at 9.45pm on Thursday 31 October 2019 at the junction of Boroughbridge Road onto Beckfield Lane.

It involved two vehicles, a Nissan Quashqai and a Suzuki Ignis.

Immediately after the collision, the driver and occupants of the Suzuki Ignis left the scene.

In particular, we are appealing for information about who was driving the Suzuki or any one who saw the driver leave the scene

Anyone with information that could assist the investigation should contact North Yorkshire Police on 101, select option 2, and ask for PC41 Ellison. You can also email david.ellison@northyorkshire.pnn.police.uk

Police are appealing for witnesses and information about a fail to stop road traffic collision in York on Sunday 27 October.

It happened on Alness Drive at around 8.30am and involved a BMW and another car which failed to stop at the scene.

The owner of the BMW, a woman in her late 60s, was placing her grandchild into the rear seat of her car when the offending vehicle collided with her open rear door, pinning her between the door and body of her vehicle.

The offending vehicle, described as silver or gre and possibly the size of a small MPV, failed to stop and made off towards Moor Lane.

As a result of the collision, the woman suffered broken ribs, a broken collar bone, a fractured knee cap and a potentially broken leg. She was taken by ambulance to York Hospital where she is still receiving treatment.

In particular, we are appealing for information about the offending vehicle and its current location. This vehicle is likely to have damage to its nearside front end.

If you can help, please contact North Yorkshire Police on 101, select option 2, and ask for Phillip Kennedy. You can also email philip.kennedy@northyorkshire.pnn.police.uk

The collision happened on Saturday 13 July at around 2.30pm on the on A1237 between the Copmanthorpe and Woodthorpe roundabouts.

It involved a bright blue BMW travelling towards Clifton Moor and the pedal cyclist who was crossing the road.

The cyclist, an 87-year-old man from York, was airlifted to hospital with multiple serious injuries but died in hospital on Monday evening (15 July).

The driver of the BMW, a 60-year-old man also from York, was uninjured.

Police would like to speak to anyone who witnessed the collision itself or saw either vehicle prior to the collision, particularly anyone with dashcam footage.

Anyone with any information is asked to contact Steven James in the Major Collision Investigation Tadcaster either via email; Steven.James771@northyorkshire.pnn.police.uk or by calling 101 quoting reference; 12190126860

If you wish to remain anonymous you can contact Crimestoppers on 0800 555 111 or online at crimestoppers-uk.org

UPDATE; Officers investigating a collision involving a 12-year-old girl and a motorcycle in York have arrested a man.

A 29-year-old York man was arrested at 8pm yesterday on suspicion of causing serious injury by dangerous driving and failing to stop. He remains in custody at this time.

Police are urgently appealing for witnesses, information and dashcam or CCTV footage following a serious collision in York this afternoon.

At about 5pm on Wednesday 12 June 2019, police received a report of a serious collision on Low Poppleton Lane, York, involving a pedestrian – a 12-year-old girl – and a motorcycle which left the scene.

Part of the road is covered by ANPR cameras which are used to enforce access, at a” pinch point”, to buses only.

Council chiefs, when the access restriction was reintroduced, courted controversy by saying that moped riders should dismount when they reached the “bus gate” and push their machines along the adjacent cycle track.

A report on allowing two wheeled machines to use the bus gate has been outstanding for over 6 months.

The pedestrian suffered serious head injuries in the accident and was taken to Leeds General Infirmary for treatment.

The motorcycle, believed to be grey or silver in colour, left in an unknown direction. The rider is described as wearing a black jacket and had a white helmet on.

The scene is closed off and will remain so for several hours while Forensic Collision Investigators examine the scene. Motorists are asked to avoid the area.

The girl’s family are with her at this difficult time.

Officers are appealing for anyone who witnessed the collision or the motorcycle leaving the scene, or anyone who may have any dashcam or other CCTV footage of the incident, to contact North Yorkshire Police. Please do so as a matter of urgency, quoting NYP-12062019-0335.

Officers are also appealing to the rider of the motorcycle, or anyone who knows where the rider and motorbike are, to immediately contact North Yorkshire Police directly, or alternatively via Crimestoppers on 0800 555 111.

Officers are appealing for information to help find a black Nissan after it was involved in a collision in Blossom Street in York.

The incident happened at midday today, Tuesday 21 March 2017, when the driver of a black Nissan failed to stop after colliding with a male pedestrian.

The man suffered serious, but not believed to be life threatening, injuries and was taken to hospital by road ambulance.

Anyone who witnessed the collision, or has seen a black Nissan in the area which looks damaged, is asked to contact police. Dial 101, press 1 and pass information to the Force Control Room.

Please quote reference number NYP-21032017-0165 when passing on any information.

At about 11.45am on Saturday 5 November, a two-vehicle collision occurred in Gale Lane, involving a black Peugeot Expert and a Vauxhall Zafira.

The driver of the Peugeot was taken to York Hospital, where he was sadly pronounced deceased. 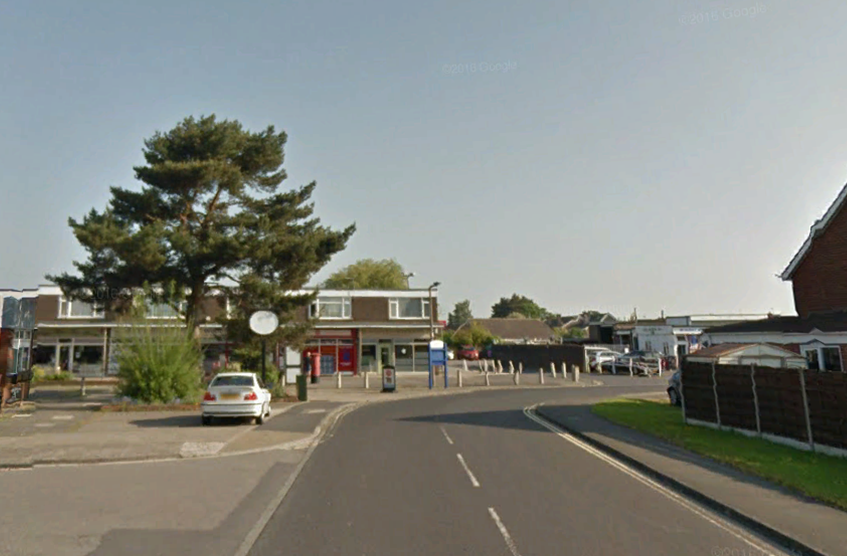 It happened near the shops on Moorcroft Road at around 4pm on Tuesday 4 October 2016 when a red car collided with the girl, before leaving the scene without stopping.

The victim suffered a sprained ankle and fracture pelvis as a result of the collision.

Police are appealing to anyone who was in the area at the time and saw the car prior to hitting the girl, or who witnessed the actual collision to contact them.

They are also appealing to the driver to come forward and to anyone else who may have information that could help identify the driver, to contact the police.

Police in York have issued an appeal to find vital witnesses after a woman moped rider suffered serious injuries when she was involved in a collision with a blue Toyota MR2 and a white Toyota camper van.

It happened at around 9.15pm on Thursday 1 October 2015 near the Monkbar Hotel on St Maurice’s Road in York.
END_OF_DOCUMENT_TOKEN_TO_BE_REPLACED

The numbers killed or seriously injured in road traffic accidents in York increased from 58 to 75 last year. 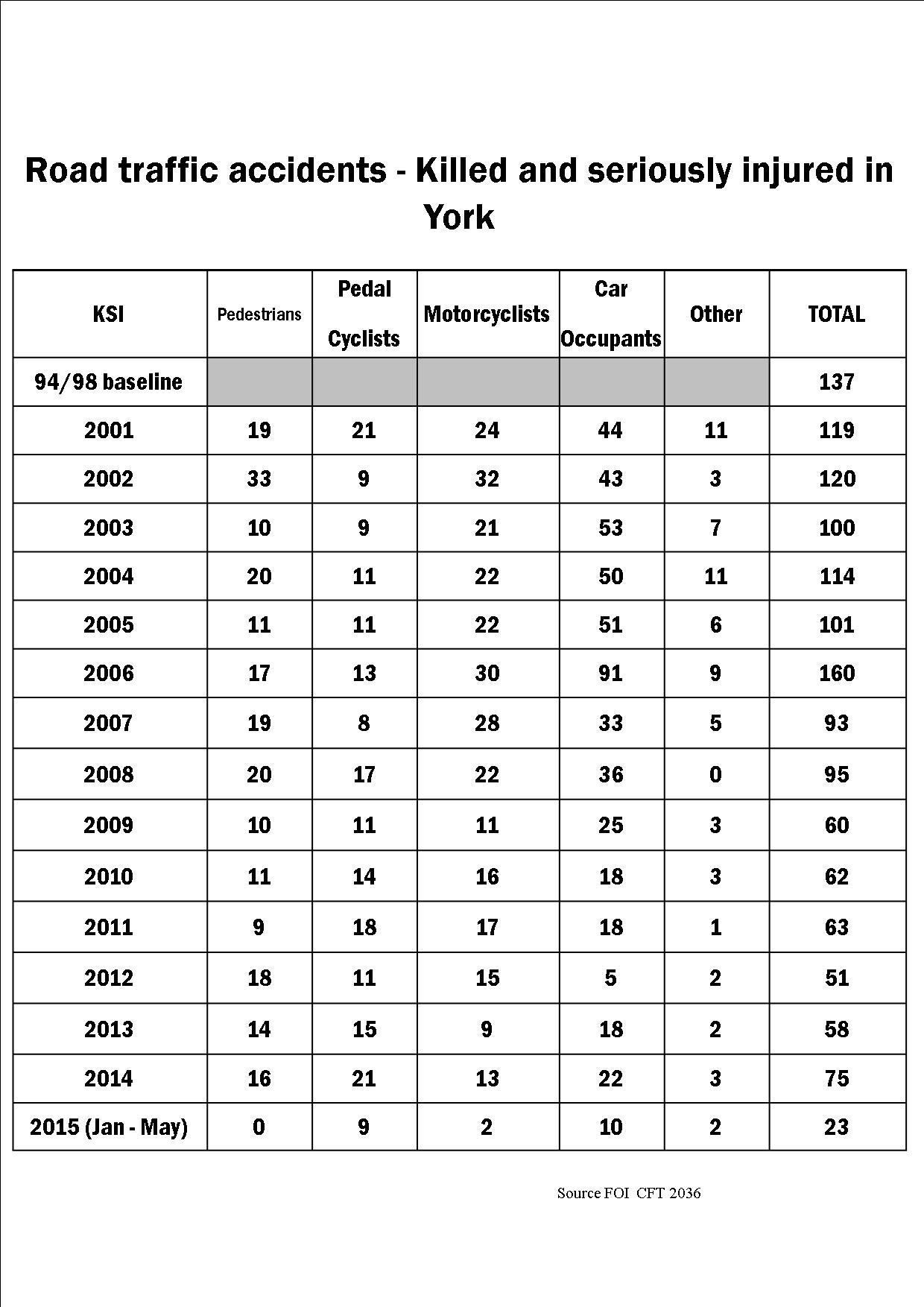 All types of road user were affected including pedestrians and cyclists.

The increase was the largest since the “95Alive” task group was set up 10 years ago to counter a peak in road causalities.

The increase is bound to reopen the debate about wide area 20 mph speed limits. One of the claimed objectives of that project – launched in 2013 – was to reduce accidents. Opponents warned that the consequences could be that police enforcement time was reduced at accident black spots and that the deterrent affect, of focusing lower speed limits at key sites like schools and shopping areas, would be lost.

It appears that these concerns were justified.

Up to 2011, the Council’s Executive member used to receive a regular public report on road traffic accidents. The reports included details of the type of accident and the location. Officials made recommendations about possible remedial works (road alignment, signage, speed enforcement etc) which might avoid accidents in the future. This approach was abandoned by the last Council when it fell under Labour control.

A combination of accidents and road works have led to above average levels of traffic congestion on many roads in York this evening. 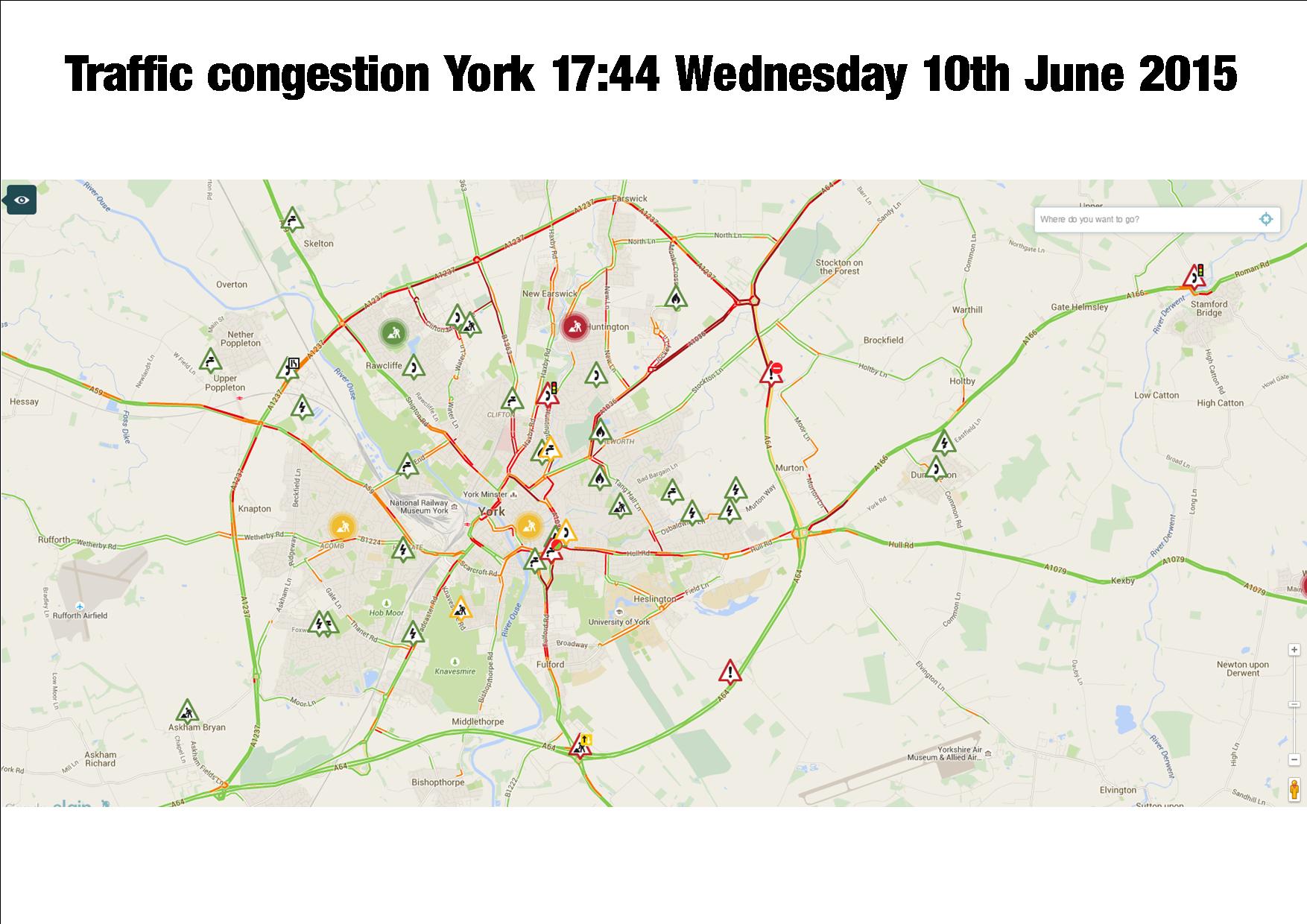