What should drivers expect?

Actually, probably not much difference to congestion levels.

The schools are still on holiday and that makes a lot of difference to traffic volumes. So there will be spare capacity on most of the road network during the day.

True, for some, journeys will be longer, with people living in the City centre particularly inconvenienced.

But the forecast gridlock is still probably some weeks away.

For a couple of weeks, it is likely that motorists will shun the City centre, putting off inessential journeys or opting for out of town shopping destinations

What could make matters worse are unpredictable road accidents, poor weather (which tends to see more people getting into their cars), road works and yet more faulty traffic lights (of which, we’ve had more than our fair share over recent weeks).

Weekend traffic patterns are very different though. Many will be watching with anxiety what happens on 31st August. 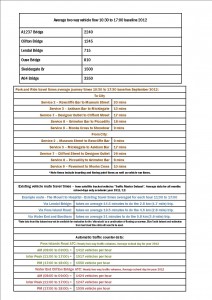 Now only a few days before the restrictions are due to be implemented, the Council has published the criteria under which it will judge how successful the closure has been.

It is clearly an afterthought.

We questioned on 27th April why no success criteria had been published.

It slowly became clear that the Council had not even thought of what objective measures it should apply.

Now some “tests” have been cobbled together without any public consultation and too late to get some of the base line public opinion data.

The Council claims to be open but they have failed to publish the public opinion data on the trial which was apparently collected “between 15th and 20th August”.

It also looks like they will only be taking into account the views of people actually using the transport systems rather than including those who choose not to access the City centre.

Ironically the Council promise to publish the results on their web site including bus service reliability (a “stat” that they have dogmatically refused to reveal during the last 2 years).

They say that they won’t be measuring changes to air quality (Gillygate is a critical area).

They admit that any changes in cycle use and walking could be influenced by other initiatives (and the weather). 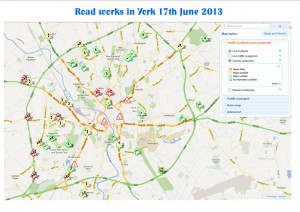 Problems will arise in the autumn when a combination of poor weather, the return of the “school run” and continuing road works on the A1237 could produce a “perfect storm” test for the closure

NB. There is little point in looking to the councils travel web site for help. Several months after a new control centre was opened, traffic monitoring cameras are still not working http://www.yorklive.info/ 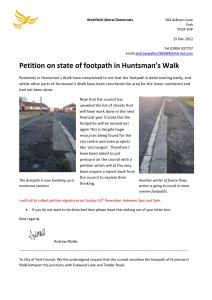 Petition being considered on Tuesday

A petition collected last year, which asks for the footpaths in Huntsman’s Walk to be resurfaced, will be considered by the York Council on Tuesday

The officer report confirms that the path between Tedder Road and Foxwood Lane is in poor condition. It was, however, ranked as only the 96th priority for resurfacing this year.

The petition has now raised the priority of the path to 61st on the waiting list.

It is likely that the Labour Councillor, who will decide whether to approve the resurfacing, will decide not to give the path a higher priority. It therefore may, or may not, be done next year.

NB. The budget for highway maintenance works was halved when Labour took office at the Guildhall in 2011.

A massive backlog of highways maintenance work is building up.

However Labour have found £600,000 to pay for the introduction of a 20 mph speed limit in west York!

Pelican lights out at Front Street Acomb, proceed with care.