The backlog of requests for patching and resurfacing of roads in York seems to be growing.

Requests for potholes to be filled and uneven roads repaired are now being routinely turned down.

The risks for cyclists and pedestrians are rising.

Even when officials decide that some work is needed only rudimentary work is done to potholes. They usually require attention again within a few weeks.

The very least that officials and responsible Councillors should do is explain their policies, what is possible within existing budget allocations and when residents can reasonably expect to see an improvements.

Some pretty bad mistakes seem to have been made when the allocation of basic maintenance budgets was agreed.

Councillors seem oblivious to the growing chorus of complaints.

This issue is an election loser if ever there was one

NB. The resurfacing programme for the new financial year should be published shortly

The current icy spell is taking its toll on poorly maintain road and path surfaces. The Council recently agred to undertake some repairs on teb potholed – and well used – section of Foxwood Lane near the sports area. The work has yet to be completed and the potholes continue to pose a hazard particularly for users of two wheeled transport.

The Council promised to repair damaged roads, paths and verges when the building works on Newbury Avenue and Ascot Way were completed. There is little sign of progress.

The York Council has an additional £1.8 million to spend repairing roads in the city. It comes for a central government “potholes and challenge” fund.

In addition, an additional £5 million is available to spend on Tadcaster Road although the carriageway itself there has already been resurfaced earlier in the summer.

Apparently, this additional funding will be allocated to improving drainage systems in the area.

Many roads and footpaths in the City are in poor condition so the extra investment will be welcomed by residents.

However, we are approaching the winter period so the Council needs to move quickly to get the work scheduled.

The York Council exceeded its expenditure budget during the last financial year by nearly £2 million..

It was able to fill the gap by drawing on £1/2 million from its contingency allocation. It also raided its reserves to find an additional £1.4 million which it had previously earmarked for pay and pensioners liabilities. The final £309,000, held to repay unlawfully issued fines connected to the Lendal Bridge closure, was also utilised.

While this juggling of funds allowed the authority to emerge with a £128,000 surplus on its 2019/20 £123 million budget, the moves camouflaged large overspends on Education and Social Care. Promised efficiencies there failed to materialise.

The £1.5 million overspend by the Education department will no doubt result in a renewed focus on inessential expenditure. One trenchant “citizen auditor” has reported finding that the department apparently spent £10,000 renting rooms at a luxury hotel and golf complex in Humberside last year. The nature of the activity is being investigated.

Clearly the Council will now need to clamp down on anything other than essential expenditure.

The Council faces a new multi-million pound shortfall on its income this year as a result of the Coronavirus epidemic. It will not be able to call on the above reserves again but does have a buffer provided by the £7.4 million held in general reserves.

A meeting to discuss the report takes place on Thursday

Quality of Public Services in York

The Council has also released some information on public service quality. Unfortunately, many of the figures are not up to date. There is likely to be some cynicism about some of the results with only 20% of road surfaces in the City classified as “poor” or “very poor” by Council officials!

It looks like the Westfield area has been snubbed in the latest highways maintenance budget allocations.

In another “behind closed doo

rs” decision, tens of thousands of pounds, from “delegated” ward budgets, has been allocated for highway and footpath repairs plus some other work  like new parking laybys. 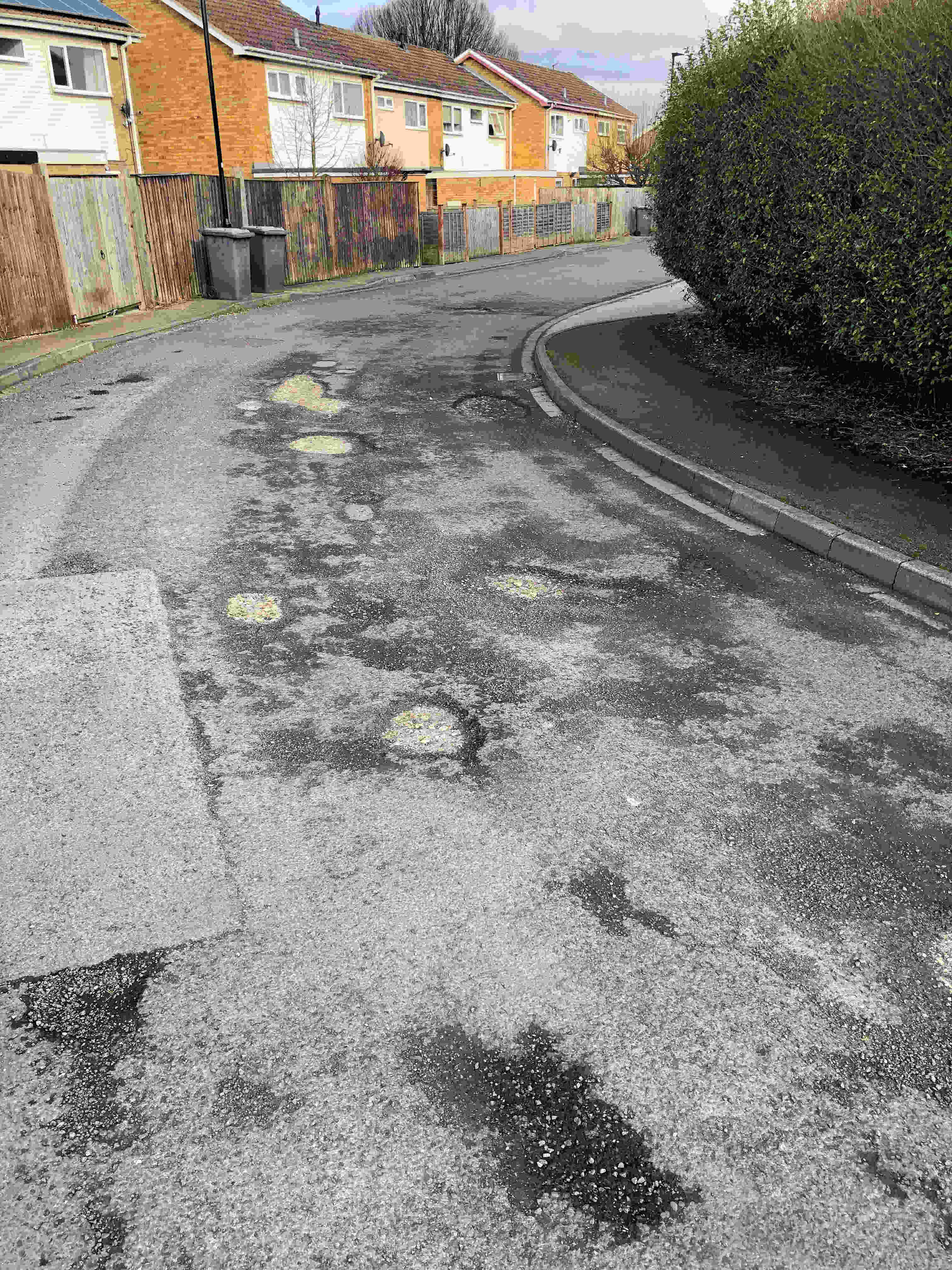 One of the roads omitted from repair programme

The absence of Westfield from the list is doubly surprising.

Some local roads are in an appalling condition.

Local Councillors were given lists of problem locations over 6 months ago.

Poor weather in the intervening period has seen some surfaces – such as those on the Morrell Court access road – deteriorate quite markedly.

The report to the decision meeting gives details of how much money is available for local ward Councillors to manage.

It also explains the assessment process.

“The Ward Highways Capital Scheme is a four-year programme formed from £250k p.a. of capital resources set aside from the main Highways Capital Programme. It is designed to allow wards to bring forward schemes that are important to local residents but would struggle to be prioritised as part of the main capital programme. A nominal allocation is made to each ward on a population basis. Wards are able to aggregate their allocation by carrying over / bringing forward annual allocations in order to undertake more substantial schemes.

The programme was enhanced in 19/20 through the allocation of the following one-off amounts to it:

(NB. Details of how the walking and cycling budget is being spent were published a couple of weeks ago. Yet again no projects in the Westfield area were agreed).

The Council says the aim is to use this funding flexibly to meet the needs of wards whilst taking account of all relevant legislation and statutory guidance as highways are heavily regulated environments.

The following process is used to identify schemes:

Wards not receiving an allocation were Acomb, Haxby, Heworth Without, Hull Road, Holgate and Westfield.