Pleasant weather brought out the crowds in York today. The numbers in the City centre were comparable to a normal bank holiday. Parts of the market were particularly busy with long queues at several food outlets. 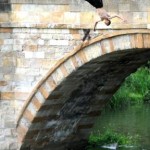 A report to a Council meeting next week, from the Safer York Partnership, confirms that there have been 24 deaths by drowning in York’s’ rivers over the last 15 years.

Of 6 deaths in the Ouse in the City centre area,  4 have been treated as accidental.

The report comes at a time when many young people are risking their lives by jumping off City centre bridges (see above).

Between May 2013 and April 2014 there were approximately 35 other reported incidents to North Yorkshire Police that were connected to the river that involved some from of possible harm.

This figure is likely to be an underestimate due to difficulties in data retrieval and classification. The following are known about these incidents;