Contrary to the claims made in a Council report published yesterday, it appears that the owners of the SPARK Container village on Piccadilly HAVE NOT signed a new lease.

The revelation comes in a response to a Freedom of Information published today.

SPARK were controversially offered a new lease at a meeting which took place on 14th February. They had been due to vacate the site in June.

Following complaints from neighbours and against a background of non compliance with planning conditions, the Council sought to place new restrictions on how SPARK could operate the business. (see below).

It has now emerged that SPARK has settled outstanding 2020 Council debts to the value of £23,333

The development was granted a 2 year extension to its planning permission earlier in the summer.

Spark has been operating on a “tenancy at will” basis since June.

The Council says, “The Council are in discussions with Spark over the provision of the new lease following the grant of a Tenancy at Will earlier in the year, which is still in force”.

The long term future of the 17/21 Piccadilly remains unclear as the health crisis and economic recession makes early redevelopment unlikely.

It has been suggested that the site could be used as a terminus for a disabled friendly zero emission transport system which would ferry less ambulant visitors around the City centre.

This use – which might also offer residential or workshop opportunities at first floor level – could help to ease pressure on the nearby Castle car park.

According to a local community blog published in Brixton, London, the local version of the “container village” hasn’t paid any rent to the Lambeth Council for 5 years.

“Pop Brixton” was used as a paradigm when the York Spark owners were trying to persuade the York Council and its planning committee that siting shipping containers in a conservation area was a good idea.

Like Brixton, the operators offered to rent the Piccadilly site from the Council and to share in the ventures profits.

An FOI response to the “Brixton Buzz“ has revealed that a similar deal there produced no income for the local authority.

Now, like in York, monthly rental payments are being sought by Lambeth Council.

A Freedom of Information request was submitted to the York Council on 25th August asking the authority to confirm that the terms of a new lease – agreed in February – have been fulfilled by the site occupiers.

Spark operated on a “tenancy at will” basis earlier in the summer following its closure during the health crisis. Its original lease expired on 1st July 2020

The Council has confirmed that the promised “profit share” on the Spark container village development on Piccadilly has still not materialised.

Payments should have been made at the end of the last financial year.

In their original pitch to the Council in 2016, the operators promised a share of the profits on the project which were expected to more than cover the £40,000 costs of the Council providing mains services to the site.

No explanation for the failure to make a payment has been published nor is there any item on the Council forward decision-making programme which would suggest when an explanation may be forthcoming.

It is estimated that, had the site simply been used for car parking, the Council would have received around £200,000 in income over the last 3 years.

The containers are due to be removed in June 2020 although the Council has been very slow to market the availability of the site for permanent redevelopment.

There have been ongoing problems on the site with several planning conditions not being observed.

Over £4000 in Business Rate payments are also owed to the Council.

NB. Under EU regulations, which are still expected to apply after 31st January 2020, government bodies are specifically prohibited from subsidising private companies.

Freedom of Information response confirms no rent or rates paid

Despite receiving a decision notice which required the company to implement the original planning condition which included providing cladding on the outside of the containers on Piccadilly, Spark still haven’t started work.

The decision notice was issued on 21st August, over 2 months ago.

Spark were publicly quoted as saying that they would “appeal” to the Secretary of State against the Councils decision. They haven’t done so yet and indeed it could be another 4 months before they have to register an appeal.  Even then Planning Inspectors could take several months to determine the case. That might be close to the May 2020 end of their lease for the site.

The Council says, “It is the view of planning officers that it would be inappropriate and unreasonable for the planning authority to attempt to take planning enforcement action whilst they exercise their right to challenge the Council’s decision”.

Their position ignores the fact that the developers have been in breach of the planning conditions for over 6 months now and that they have failed to record an appeal against the August planning refusal.

With containers having been in place since September 2017, that would mean that the ugly frontage would potentially have been on public view for over 2 years.

A Freedom of Information response (ref: IGF/10492) has confirmed that Spark have not yet paid any rent or rates on their development. The rates issue is blamed on delays in the Valuation Office who have yet to respond to a valuation request issued to them in May 2018. 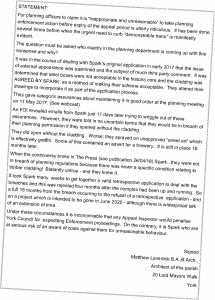 It appears that the Council issued a contract to Spark which didn’t require any rent payments to be made until March 2019.  It is unclear whether the council collects rent 12 months in arrears on the other properties that it rents in the City (Council house tenants pay rent fortnightly).

“The original building regulation application was approved at the site, however this has subsequently been amended to incorporate roof cover which is currently being assessed. As soon as this is complete a Completion Certificate will be issued for the site”.

Perhaps not surprisingly other developers in the City are now crying “foul” and are claiming that there is no longer a level playing field. 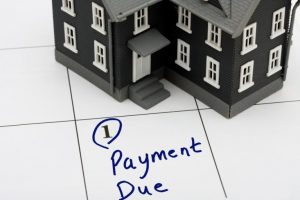 The York Councils Executive member with responsible for housing is being asked to write off the bad debts of 4 former Council tenants.

The amount involved is nearly £6000 each.

With average Council house rents around £300 a month, it means that these former tenants didn’t pay any rent for around 18 months.

They are unlikely to have been housing benefit cases as the rent payable in those cases is usually minimal.

The tenants apparently absconded between 2 and 5 years ago.

The identities of the tenants involved are not being disclosed. In the past “naming names” has sometimes allowed the Council to trace those who have absconded. It is not clear why the Council has changed its policy and granted anonymity in these cases.

The Council says that if it does trace the individuals concerned they will still be required to pay what they owe.