Some good news from the office of the Police and Crime Commissioner.

Elected Police and Crime Commissioner for North Yorkshire Julia Mulligan has today announced that Lisa Winward is to be put forward as her preferred candidate to become Chief Constable of North Yorkshire Police.

Lisa Winward, currently North Yorkshire’s Temporary Chief Constable and Deputy Chief Constable since February 2017, was chosen following a rigorous two-day interview process, including taking questions from members of the public and partners in a Question Time event and panel interviews, on Thursday 26 and Friday 27 July.

The Police and Crime Commissioner will now put her preferred candidate to the North Yorkshire Police and Crime Panel, who have a statutory duty to hold a confirmation hearing to consider Temporary Chief Constable Winward’s suitability for the role. This will take place on Wednesday 15 August. 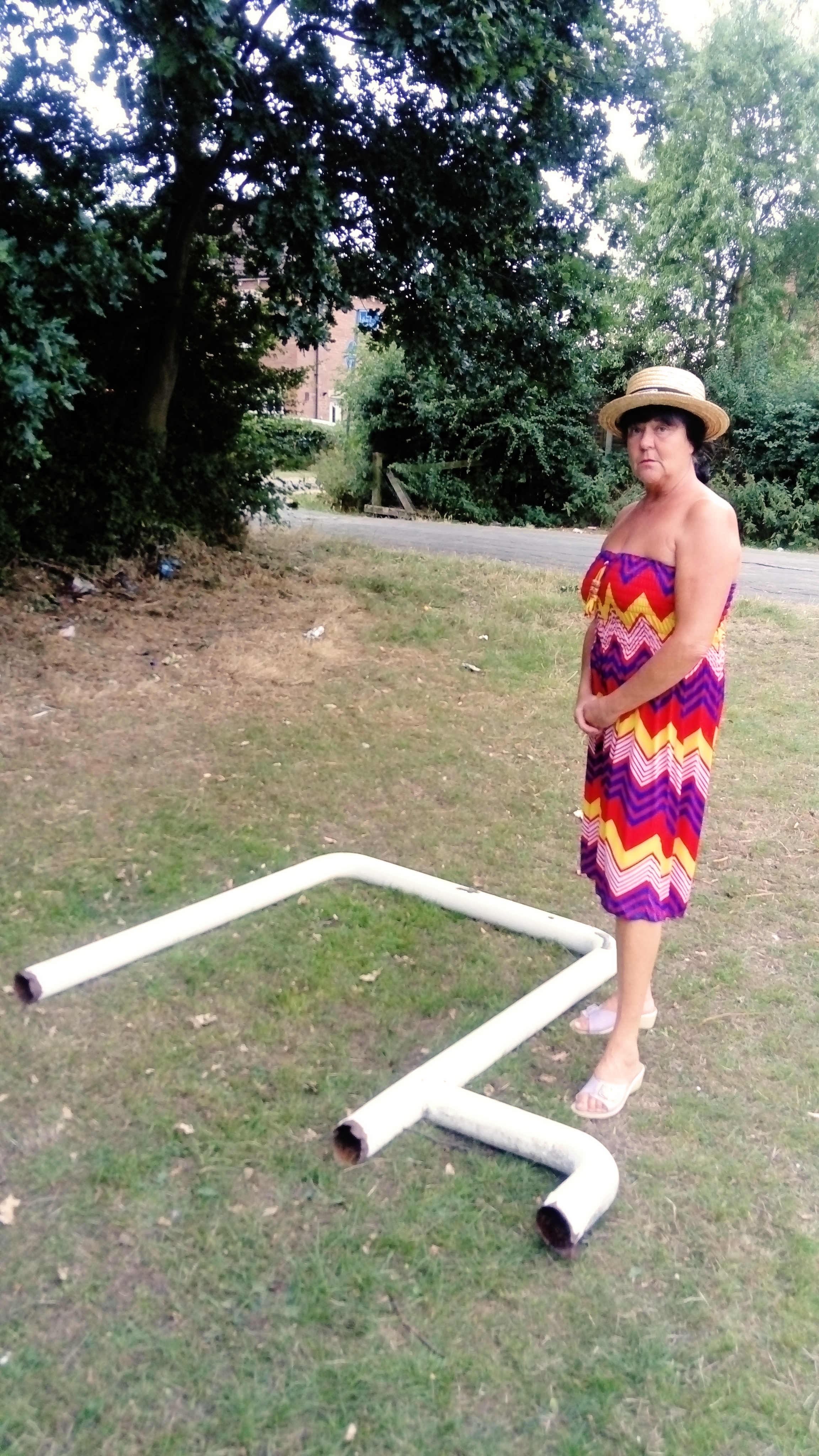 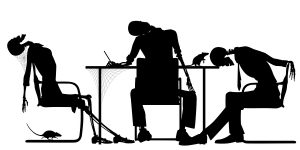 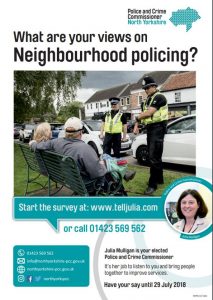 The First York number 4 bus then arrived and the victim got on. She was uninjured and did not lose any of her property during the incident.

At this time no arrests have been made.

In particular, we are appealing for information about the identity of the male suspect.

He is described as white, approximately 5ft 6in tall, dark-brown shaggy hair with a bit of a fringe which didn’t reach his eyebrows, skinny build, a gaunt face which shows his cheekbones, dark eyebrows and brown staining on his teeth as if he was a heavy smoker.

He was wearing a white Superdry jacket with blue jeans which had a rip in them, which the victim thinks was on the left knee, and  brown leather-style shoes. He spoke with a local York accent and he was riding a black battered mountain bike.

Anyone with information that could assist the investigation should contact North Yorkshire Police on 101, select option 2, and ask for Andrew Copeland. You can also email Andrew.Copeland@northyorkshire.pnn.police.uk

At around 12.05pm on Saturday 10 March 2018 the two women pictured entered the store, one woman was carrying a blue rucksack.

A number of items of children and adult clothing were removed from the store, without any offer of payment being made.

Anyone who recognises either of the women pictured is asked to contact PC Emily Clark on 101 or email Emily.Clark@northyorkshire.pnn.police.uk

Crimestoppers can be contacted anonymously on 0800555111

Police received reports of an altercation involving a number of men and women outside Boyes on Front Street Acomb, shortly before 12.40am.

Upon arrival, officers found five men and four women to be involved in the altercation and an assault had also taken place.

Two men from York, aged 23 and 33, were arrested in connection with the incident. Both men have been released under investigation while enquiries continue.

Anyone who witnessed the incident or who has any information is asked to contact police. Dial 101, press 2 and ask to speak to York Investigation Hub.

Please quote reference number 12170231267 when passing on any information. 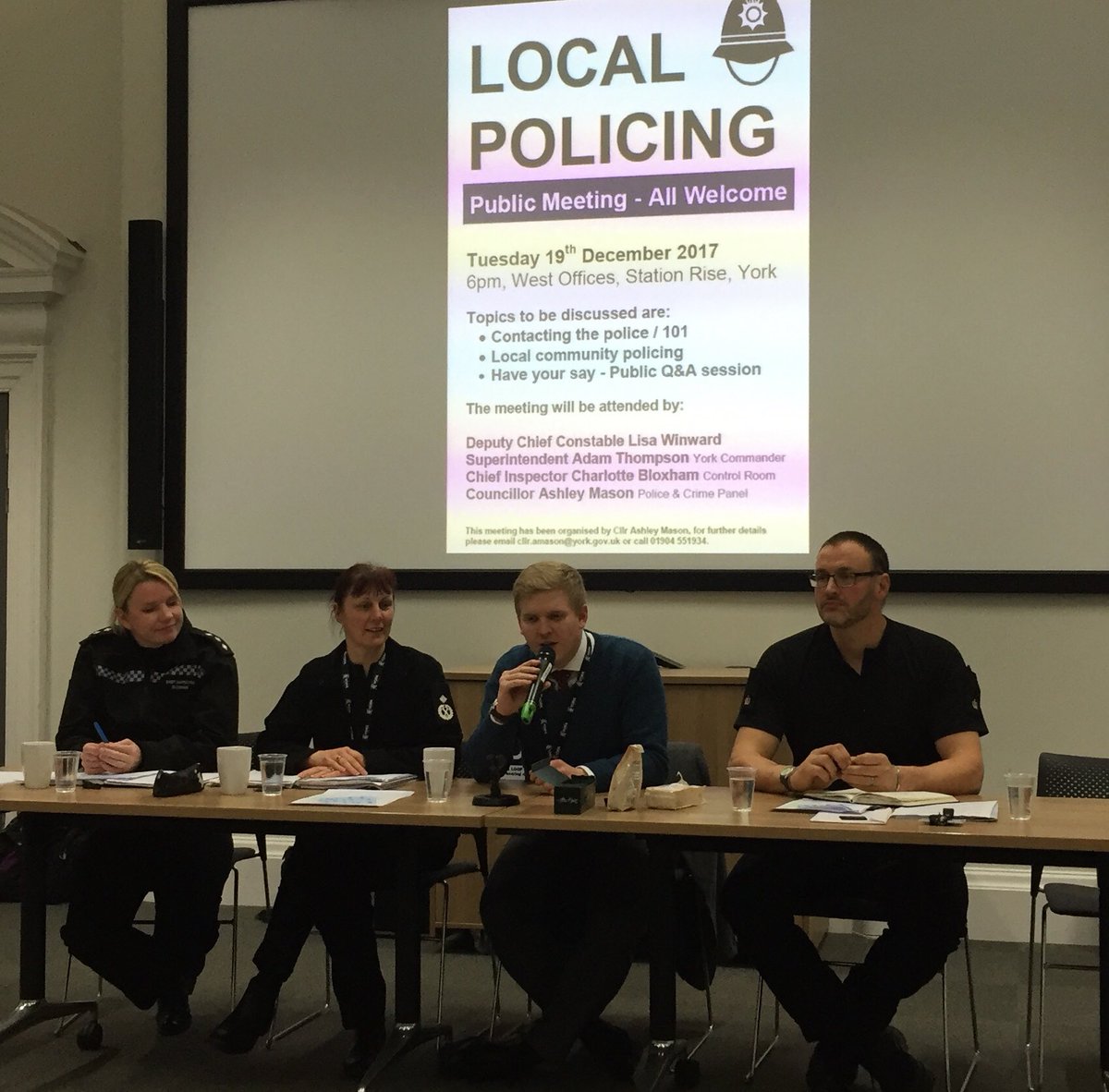 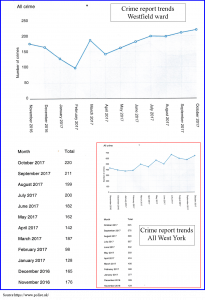 There was little more to report on delays in answering 101 calls although the Police were able to say that on average all non-emergency calls were answered within 90 seconds. Residents were told that a standard 15p (flat rate) fee applied to all 101 calls. There has been a big increase in the numbers of people using the service.

Many residents from the Foxwood and Woodthorpe areas attended the meeting and complained about ongoing anti-social behaviour problems.  A sharp increase in criminal damage incidents had been noted earlier in the year and figures produced for the Westfield Ward (left) showed a steady monthly increase in reports up to the end of October.

The Police explained that they had transferred PCSOs staff into permanent (City Centre) Police officer posts earlier in the year. Many of these had come from sub-urban areas. This might explain why communication links between the Police and Residents Associations stalled in January 2017, and are only now being reinstated.

More recently an increase in police patrols – and the use of social media including twitter (https://twitter.com/NPTYorkSouth) – had been noted. This included a high-profile attempt to take some of the “scooter gangs” off local roads. 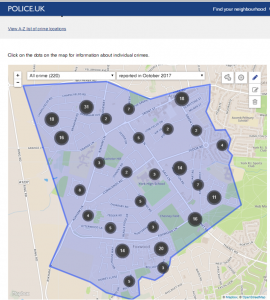 Crime distribution in the Westfield ward in October 2017

The performance and transparency of the Safer York partnership was criticised. The Councils web site provides access to the minutes of the organisations last meeting which apparently took place in December 2016 (click). Those attending the public meeting were assured that another meeting had taken place since, although the claimed two monthly frequency was not being achieved (click).

In any event, the Safer York web site is over 2 years out of date and includes a message, urging visitors to help flood victims, prominent on the “what’s on” page!! (https://www.saferyorkpartnership.co.uk/latest-news/)

Nor is the North Yorkshire Police web site much more up to date.  In the neighbourhood’s section they assure residents that the last “event” – property marking – took place last March. There are no events planned for 2018. (click)

Plans to reinvigorate the “Neighbourhood Watch” scheme were announced by Cllr Andrew Waller while most attendees were appreciative of the trouble taken by Cllr Ashley Mason to organise the meeting. Senior police officers present were able to reassure residents that a recovery plan was in place and that the expectations were that policing standards next summer would be higher.

For their part, residents wanted to see more proactive policing with the emphasis being on preventing crime rather than reacting to incidents that had already taken place.

This would mean a sustained improvement in all communication channels and the likely reversal of the trend to centralise resources into the City centre generally and West Offices in particular. 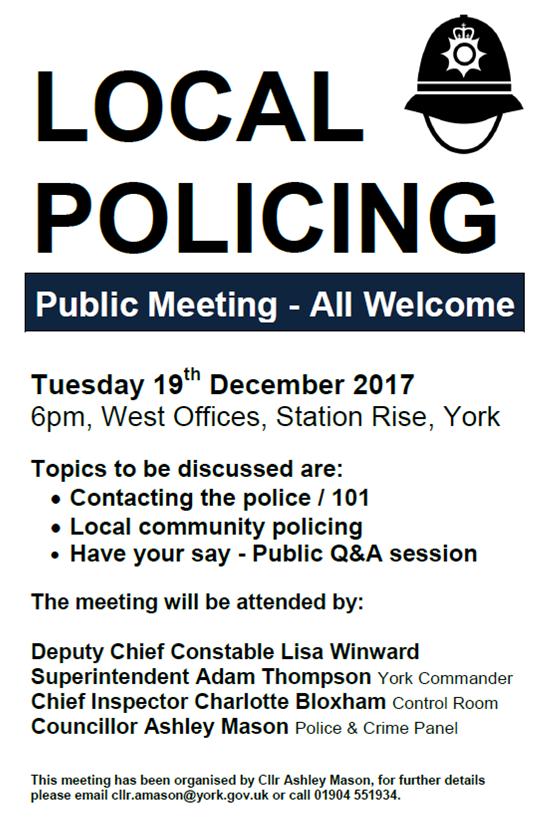 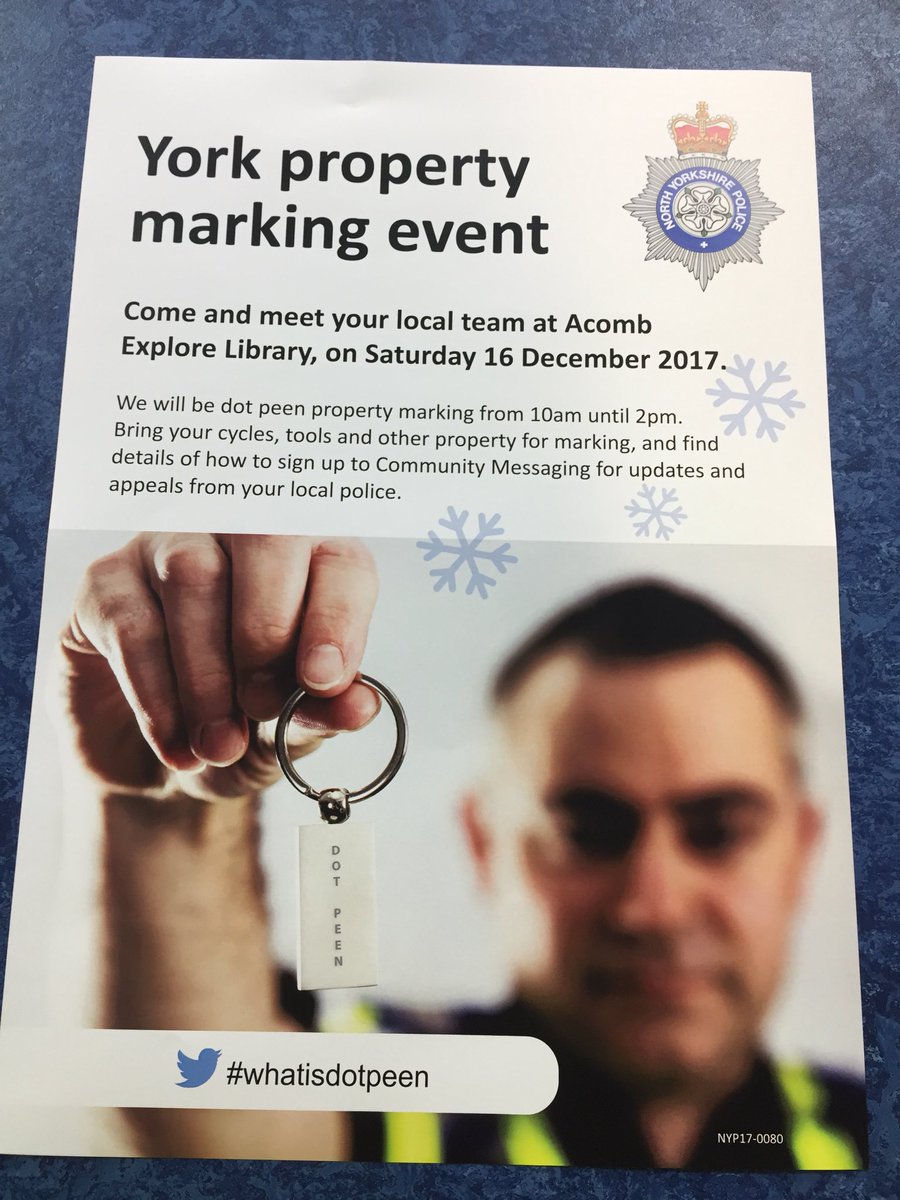 Come and meet your local policing team at Acomb Explore Library on Saturday 16th December 2017..
We will be Dot Peen property marking from 10am until 2pm.
Please bring your cycles, tools and other property for marking.
Details for Community Messaging can be explained in full when attending