1.1 The site occupies part of an agricultural field on the south side of Boroughbridge Road (A59), positioned at the edge of the suburban area on the west side of the city.

There is housing to the east; Trenchard Road being closest, and Muddy Boots nursery to the west of the site.

Beyond the site, there is further agricultural land to the west and then a petrol station and commercial unit positioned at the junction where the A59 meets the outer ring road.

To the south is agricultural land between the suburban edge and the outer ring road.

Opposite the site on the north side of the A59 is the former Civil Service site, which has planning permission for housing development (266 dwellings approved under application 14/02979/FULM).

The site is within the general extent of the Green Belt.

The development plan for the area is the Upper and Nether Poppleton Neighbourhood Plan. Within the plan the site is designated as being within the Green Belt.

The application proposes 60 dwellings, with a single access point for vehicles from the A59 and associated public open space in the centre of the site and opposite the A59. The vehicle access would be opposite the approved access for the housing site at former civil service site.

The application (click) is recommended for refusal at a meeting which is taking place on 3rd December.

NB. The same meeting will have a second go at determining a planning application for the Castle Mills Car park site. This is a proposal from the Council itself and was deferred to allow further input from the professional advisers. It would see 106 apartments built and is recommended for approval.

Planning application to be determined on 13th August

Council official are recommending that planning permission be granted to build 93 houses on the site of York City Football Clubs existing stadium. The Club is expected to move to a new stadium at Monks Cross later this year.

The plans incorporate a heritage proposal agreed with Historic England which acknowledges the significance of the football ground over the last 90 years.

The report goes on to say,

The retained terrace and tunnel will provide a lasting legacy of the stadium and create a focal point for memory and orientation. The location of the retained terrace and tunnel matches the desired position on the halfway line at the midpoint of the Popular Stand and in front of the POS. The precise length of the section will be determined by conservation, engineering and health and safety considerations but is not expected to exceed 6m.

The preferred location for the memorial garden is around the base of this
structure to provide discreet location for remembrance. The side walls of the terrace could be used to support memorial plaques etc, while caskets and ashes could be buried at the base of the walls. Some existing metal fencing and gates in the Popular Stand could be appropriated to secure the perimeter at the top of the terrace and ends of the tunnel. Similarly, the
wooden picket fence in front of the Popular Stand should be reclaimed to border the memorial garden.

The idea of recreating the centre circle in the middle of the POS is applauded, it would be in alignment with the retained section of terrace and provide a further place for orientation.

The flagpole was originally located between the south-east corner of the pitch and the stadium entrance. It is suggested that the new flagpole is erected as close as possible to this original location, and that it flies a replica of the club flag as a permanent and symbolic reminder of fans’ allegiance to Bootham Crescent. Its proposed location does not exactly match the original position, but it is as near as possible in the proposed layout. Ideally, like the centre circle, it should be slightly further south and east, closer to the new entrance.

Any development will not take place until both the football and Rugby Clubs have moved to the – much delayed – new stadium. Commissioning work there is still apparently held up by the after affects of the pandemic. Social distancing regulations currently make it impossible to stage large scale trial events there, an essential prerequisite for stadium certification.

Today’s announcement of a plan to build on greenbelt land between Acomb and Poppleton highlights the problems that lockdown is bringing for the planning system in the City.

The Councils Local Plan never got beyond the preliminary stages of a hearing in public before restrictions caused proceedings to be suspended.

As so much of the Plan depends on – now impossibly unrealistic – assumptions about economic growth and the demand for extra housing that will bring not surprisingly some objectors are calling for a new plan to be developed.

But that would leave the City without a basis on which to judge individual applications for a period of 5 years or longer. It would also involve enormous cost which the taxpayer can ill afford. It isn’t even certain when revised ONS population figures could be published reflecting what is now called he “new normal”.

The “new normal” won’t be clear for at least a year.

Against that background, some developers are spotting the main chance and seeking to exploit the chaos in the planning system. Losing large chunks of the Green Belt to avarice would be a disaster for the City.

The Council only has itself to blame. They bounced their own Lowfields development – much of which is being built on playing fields – through the system before it could be subject to a proper public inquiry. The Council may, therefore, find it difficult to defend its position, if significant numbers of appeals are lodged against planning applications even if they have been rejected locally.

This also raises the issue of the role of the planning committee.

At least on “meeting” of the committee will be held later this month (21st May at 10.30am) to consider an application at the hospital. Many of its members will not be allowed to participate in what will be a “remote” meeting.

Instead what the Council terms a proportional sample will make decisions (Cllrs (Cullwick, Chair, Pavlovic, Vice Chair,  Ayre, Hollyer, Perrett, Kilbane and D’Agorne). The “proportion is based on the relative strength of the political parties represented on the Council. However planning decisions should not be determined by party political priorities. Each application should be judged on its merits.

Several Conservative and Independent members are therefore being excluded from the process, ostensibly on the basis that the more who log in the greater the risk of technical failure.

It may be that the hospital application will prove to be uncontroversial. The only outstanding application is for  the erection of vascular imaging unit on Wigginton Road. The application was submitted last August. The only significant issue appears to relate to drainage.

But there are other controversial proposals in the pipeline. The Acomb/Poppleton proposals may be the tip of the iceberg.

A more inclusive way of making decisions is required.

NB. We were sorry to learn of the passing recently of Rachel Macefield who was the lead planning officer for the Council on the York Local Plan. Our condolences to her family and friends. 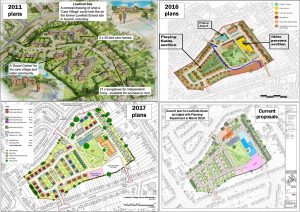 The Save Lowfields Playing Field Action Group have written to the Government Minister with responsibility for Planning asking him to “call in” the planning application to develop the sports field at Lowfields.

The proposal was approved by the Council’s Executive in July and two formal applications were debated by the same authorities planning committee last week. Two Councillors serve on both committees. They have been criticised for not declaring their interest.

There are procedures in place which seek to ensure that a Council is not judge and jury on planning applications for land that it owns. For many years there was a protocol in place which discouraged Councillors from taking places on both the Executive committee and the Planning committee. That safeguard seems to have been abandoned by the current administration.

What will come of this remains to be seen but is the latest in a series of controversial moves by the Council over this land.

A scheme for a care village gained widespread approval when it was tabled early in 2011. But the Council failed to implement the plan and the former school site lay abandoned for 7 years.  The expectation had been that only the “built footprint” of the school would be developed, but this changed when the then Tory leader of the Council, David Carr, appointed a “no win no fee” consultant to push through a large-scale redevelopment.

The consultant was only paid if he achieved milestones with his final payment depending on the planning application being successful. The large payments potentially involved  were revealed in a response to a Freedom of Information  request (ref: FT/5995) in February 2017. .

David Carr is also a member of the Planning Committee. He also did not declare an interest at last weeks meeting

Consultation results were manipulated by officials eager to demonstrate that the local community was in favour of the plans. This was done by lobbying supporters of one element of the scheme (communal housing).  They were encouraged to back the scheme by visiting the  Acomb Library and filling in comment forms or by doing so on line.

The Council didn’t ask residents which parts of the scheme they favoured and which they opposed.

A door to door survey by local Councillors revealed that residents supported the plans for the east of the site but wished to retain the sports pitch.

Residents cried “foul” when the Council wrote to local people to lobby for support within hours of submitting two planning applications in October 2017.

The Lowfields Residents Group submitted representations to the Planning Committee pointing to 11 reasons why outline planning permission for the development should not be granted.

None of the issues were addressed by Councillors or officials at the meeting.

One angry resident walked out of the planning meeting calling it “shameful”.