City of York Council is asking for comments on new proposals to cut congestion and journey times on one of York’s busiest roads. 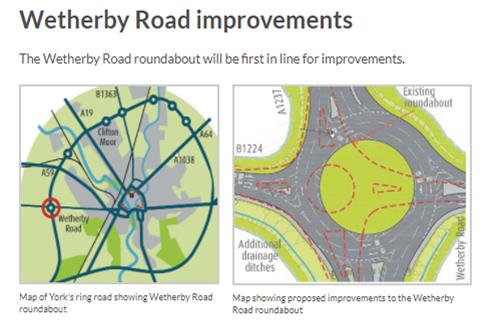 Residents and businesses have until Friday 2 February to comment on designs to upgrade the outer ring road’s Wetherby Road roundabout – one of seven roundabouts on A1237 and part of a £38m programme of improvements set for the next four years.

The roundabout upgrades will mean more lanes and space on the approaches and exits, and improvements for pedestrians and cyclists. “Where possible” the road layouts will be designed to accommodate a potential future scheme to bring the outer ring road up to dual carriageway standard.

The Wetherby Road roundabout improvement works are planned for early Summer in 2018, although some site clearance work could start earlier.

Plans can be viewed online at www.york.gov.uk/yorr, at the council’s West Offices on Station Rise, YO1 6GA, or at two special public exhibitions at Acomb Explore Library on Front Street, YO24 3BZ on Thursday 18 January and Monday 22 January from 3-7pm

All comments will be reviewed and changes to the design made where possible.  The decision on the final layout will be taken at a public Executive Member for Transport and Planning Decision Session meeting in March 2018.