The government has told councils to start meeting again from May.

Interim regulations permitted local authorities to hold remote meetings using facilities such as “zoom”. Now they will have to get together in a room with efforts being made to accommodate members of the public.

Unfortunately work on York’s Guildhall is far from complete so meetings may reconvene at the Citadel building in Gillygate.

The York Council was one of the pioneers a decade ago in live streaming meetings so the recent introduction of on line access was less of an innovation than it was for some authorities.

The on-line format has been criticised for producing a sterile atmosphere with the cut and trust of debate missing from the decision making process.

Emergency powers delegated some decisions to officials. Unfortunately there was no requirement to publish details of up coming officers decisions. The first that residents heard of some plans was when a decision notice was issued some days later.

That is something that needs to change.

The government is consulting on how the option of “on line” decision making can be made available in the future.

Certainly many Executive member decision sessions – which last for a few minutes and produce little or no engagement from residents – might usefully be held without the need for unnecessary travel (subject to the usual requirement to allow public representations to be made).

The first meeting in public may be the Council’s AGM at which a new Lord Mayor will be elected.

The meeting is scheduled to take place on 27th May.

As forecast yesterday, a “remote” planning meeting will determine an application next week which could see the York Hospital extended.

The background papers can be found by clicking here. The application is recommended for approval

Planning permission is sought for an extension to the southern elevation of the hospital to provide a vascular imaging unit (VIU). The proposed development would be 14.2 metres in height and would be sited on land currently used as a car park (resulting in the loss of 40 staff parking spaces) the building would be three storeys internally. The access to the building would be internal and externally from the east elevation. Vehicle access would still be provided between the proposed building and the footpath to the south. The proposed materials will be brick to the south and east elevations and grey cladding to the north and west elevations.

The catchment for the proposed unit would be York District, Selby District.
Hambleton, Ryedale and east Yorkshire, Bridlington and Scarborough). The unit would be used by a variety of departments and would be run and staffed by Radiology and its core activity is undertaken by the vascular and cardiac specialists.
The type of procedures include: diagnosing problems with blood flow (aneurysms etc), insertion of balloons, stents, pace makers etc. The extension will provide a Hybrid Theatre on the first floor (with associated Post Anaesthesia Care Unit) and Vascular Labs (and ancillary accommodation) on the ground floor to provide solutions for a number of clinical services across Radiology, Cardiology and Vascular Surgery. The existing VIU unit consists of two labs with a shared control room, prep/recovery space, nurse station/reception and ancillary spaces.

The applications will be the first to be held using the Councils “Remote Meeting” protocol. Under this reaction to “lockdown”, only half the planning committee have been invited to attend and vote on the plans. A virtual – on line – meeting will hear any public representations made using a, pre arranged internet based, link.

The Council has been asked to find a more representative, and accessible, arrangement for dealing with future – more controversial – planning applications.

Only 4652 residents have signed up to use the Councils “on line” issue reporting system. “Report It” was heralded as a local successor to successful commercial systems like “Fix my Street”

Unfortunately the Council system lacks functionality. Many issues still can’t be reported using the system and it has provide to be difficult to associate the reference numbers, which are emailed to complainants, with the original complaint.

Only litter and street lighting fault reports generate a confirmation when the issue has been dealt with.

The FOI response also reveals that the authority spends around £1.5 million a year on software licensing.

Residents and visitors to the city will get an early Christmas present this year with an extended Park & Ride service and free parking in Piccadilly multi-storey car park. 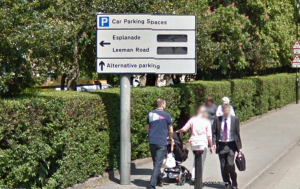 Usage of the Piccadilly car park has reduced since the advanced car parking space availability signs, which used to be available on arterial routes into the City, stopped working 4 years ago. 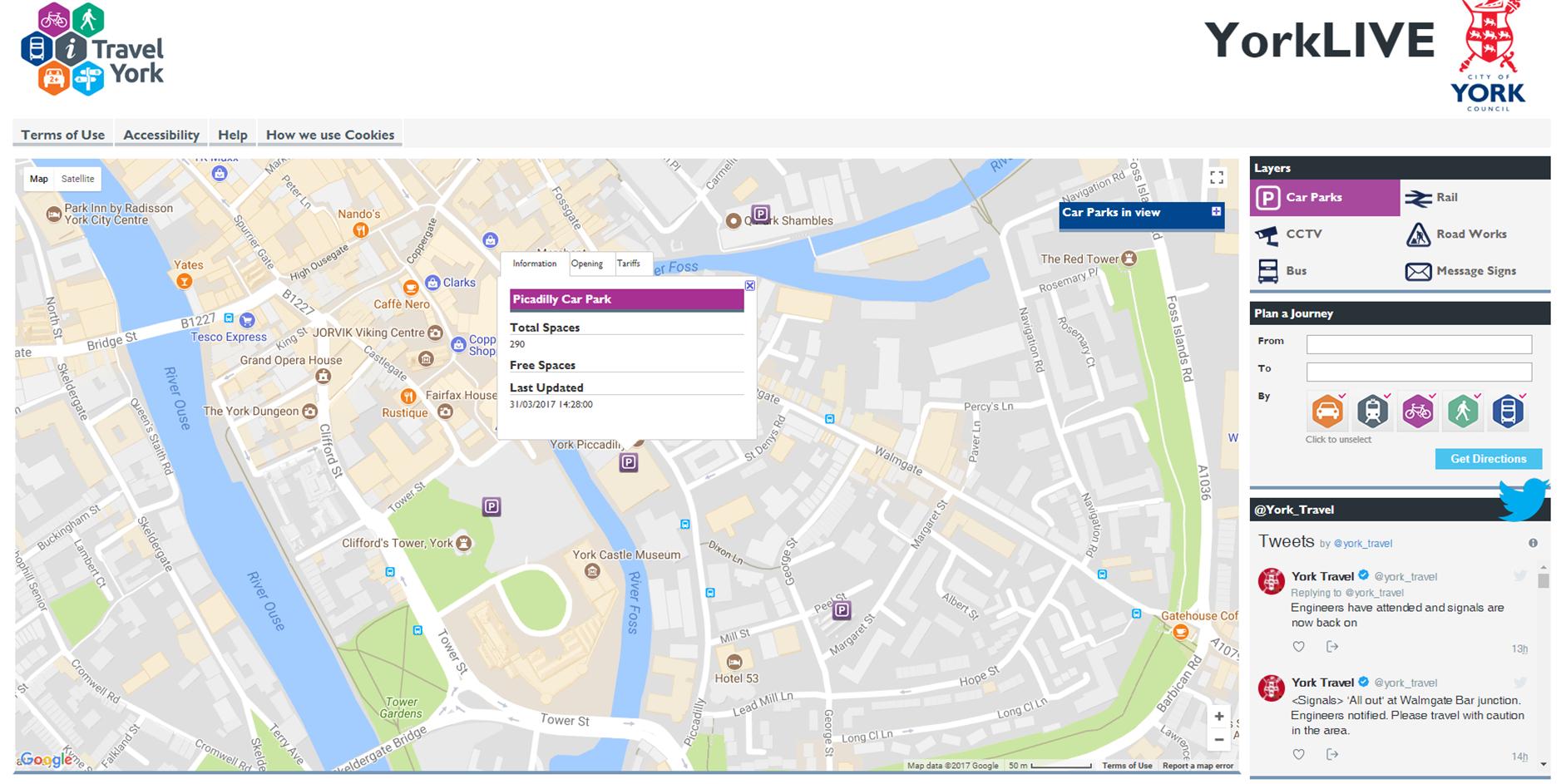 Park & Ride services will run every 15 minutes from all Park & Ride sites every Thursday. The Designer Outlet service will run later from Monday to Saturday.

Full timetable information is available online, but most services will now operate until 9.30pm on Thursday evenings, or Monday to Saturday from the Designer Outlet.

The Park & Ride services will run every 15 minutes, with the last services leaving the city centre at the following times:

For more information about travelling in and around York visit www.itravelyork.info
END_OF_DOCUMENT_TOKEN_TO_BE_REPLACED

Saturdays traffic log jam in the City was partly down to lack of information about car parking space availability.

The Council’s “on line” site http://www.yorklive.info/ still does not provide the kind of information that was available 15 years ago, we – together with many other Cities – had a system which showed the total number of spaces at car parks and the number of spaces that were free at each.

The web site is still available (click here) but it is not updated and indeed contains details of car parks which no longer exist, while the number of spaces at others is clearly wrong. It currently advises users that the Leeman Road “commuter” car park has -1 spaces.

The “on line” system has not worked properly since the Council moved offices 4 years ago,

Street information boards on the arterial roads, that indicated where parking space could be found, have also been removed.

The result is that large numbers of cars circle the City looking for parking spaces – adding unnecessarily to congestion and pollution levels.

By now the City should have a system linked with satellite navigation services which would guide drivers to the nearest available free space. Far from moving forward with this kind of the improvement, the Council seems to be heading backwards into the mid twentieth century.

The Council may be reluctant to publicise car parks in the city centre as it – understandably – wants to encourage the use of park and ride, but it needs to make a policy statement quickly on what it is doing, and what it plans to do in the future, to deal with demand peaks.

The Council makes over £2 million a year “profit” on car parking in the City. It would be well advised to plough some of this back into resurfacing the car parks and providing 21st century standards of information.

Hopefully they will be able to do something before the two busiest days of the year (the Saturday before Christmas and Christmas Eve) when pressure on spaces will peak.

Twelve ‘champions’ have been trained to deliver ‘Parenting our children online’ workshops across the city. 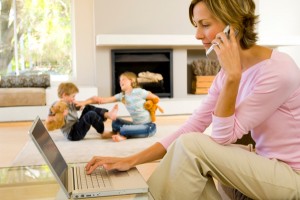 Part of the ‘It’s not OK’ campaign to raise awareness of child sexual abuse and exploitation being delivered by City of York Safeguarding Children Board and the NSPCC, the ‘champions’ will deliver free workshops to parents providing information and practical tips about keeping their children safe online.

The workshop will address some of the online issues that parents say they are concerned about including online bullying, sexting, excessive gaming, setting boundaries and where to go for further help and support.

Schools, community and faith groups, sporting organisations and others such as Brownies and Beavers groups will be able to arrange for workshop facilitators to come to a venue of their choice to deliver the 45 minute workshop to a group of parents.

Helen Westerman, NSPCC Campaigns Manager, said: “The ‘champions’ have a great mixture of skills, experience and knowledge and all work with children and families as part of their ‘day jobs’. They’re looking forward to working with parents and carers across the city to help them gain more confidence and knowledge about keeping their children safe online.”

Workshops will be starting in October and run until the end of the campaign in April 2016.

For more information about the workshops visit www.yor-ok.org.uk/parentingonline or to book a session for your organisation or group email hwesterman@NSPCC.org.uk

“Be Online 2015” at Explore York Libraries and Archives

Free, short workshops for residents to get even more from the internet and its world of information are being offered by Explore York.

From Monday 23 February to Saturday 7 March 2015, Explore York Libraries  invite residents to ‘stay healthy, find work and enjoy life online’ with a series of free and informative workshops to help further understanding and enjoyment of the internet.
Be Online 2015 will include free introductions to Twitter, Instagram, Ancestry.com, NHS Choices, eBay, Google and much more.
In partnership with Tinder Foundation/UK Online, libraries across York (except the reading cafés and mobile library) will be hosting at least one session for people of all ages and skill levels. Whether learners know the basics or have never even touched a computer before, these sessions will help widen understanding of how the internet and its applications can truly help enhance and make daily life easier.
To find out more about Be Online 2015, pick up a leaflet from your local library or visit www.exploreyork.org.uk and click on the What’s On tab. Bookings for each session can be made at any of the libraries in person, by phone or by calling 01904 552828 and leaving a message. Places are limited so please book early. 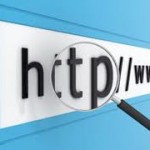 Students, independent researchers and small businesses can now access many of the world’s best academic papers across science, technology, medicine and other disciplines through York’s Libraries and Explore centres.

This is the result of a unique collaboration between librarians and publishers, who have made their journal content available for free to UK libraries under a new initiative, Access to Research.

Access to Research will provide licensed online access to over 1.5 million journal articles and conference proceedings through library terminals. With 8,400 journals included in the initiative at the moment, this will make content in the fields of Health and Biological Sciences (20%), Social Sciences (18%) and Engineering (14%) available to the public for the first time. Users will also be able to read a wide variety of articles in the fields of Art and Architecture, Business, Environmental Science, History, Journalism, Languages, Politics, Film, Philosophy and Religion, Mathematics and Physics.
END_OF_DOCUMENT_TOKEN_TO_BE_REPLACED