A huge pay rise for Councillors was agreed at a meeting last night.

On average it is worth an extra 18% although some will get more. It will also be backdated. The cost to taxpayers will be around £770,000 a year.

The increases were justified by a series of, largely bogus, claims that work volumes had increased since the previous review. In reality the time commitment for Councillors is broadly in line with levels experienced since local government reorganisation in the late 1990’s. Councillors also now benefit from new technology and casework support facilities.

While Independent Councillor Mark Warters has consistently criticised the increases, two Tory Councillors – who had both attended “behind close doors” consultation meetings with the review panel during the Autumn – got cold feet at the last minute and opposed the hike.

The notes from the autumn meetings, at which Councillors made their case for an inflation busting increase, are being circulated on social media. They are quite a revelation.

Councillors don’t of course have to accept the increase. They can choose to draw down less that the maximum allowed.

It’s not just the political future of he York Council which is up in the air.

With the defeat of Keith Myers in the Acomb poll on Thursday, the City is desperately seeking a replacement to be the next Lord Mayor.

It is still the Conservatives turn to nominate. However, They are down to only two remaining members. To become Lord Mayor a Councillor must have at least 4 years service on the Authority. Many former post holders will feel that many more years of experience are required if someone is to make a success of the office.

.. and there is the first problem. Only Tory Paul Doughty from Strensall qualifies. He may, or may not, want to take on the exacting full-time role. If he does, then he will face the decision whether to nominate his partner as his consort or find another volunteer.

The Sherriff of York – nominated by the Lord Mayor – also forms part of the Civic Party. The holder does not have to be a Councillor. Given his interests in conservation, this might be an ideal role for Keith Myers, if he can get over his disappointment in not achieving the top job.

But suppose the Tories turn down the post. What happens then?

This has happened in the past. Groups unwilling, or unable, to nominate lose their accumulated qualification points.

The Council uses a points system which allocates each group on the Council a point for each Councillor that they have (at the end of May each year). The group with the largest number of points nominates the Lord Mayor for the following year. When a party nominates, they lose 47 points (equivalent to total the number of Council seats) and must start to accumulate points again.

The system has worked well. In non election years the likely incumbent has had plenty of time to prepare for the office, while smaller groups do qualify to provide the city’s figurehead.  The Green party nominated the Lord Mayor for the first time a couple of years ago.

So, if the Tories turn it down, what happens then?

The Group with the next highest points total would be asked to nominate. That means someone will get only 3 weeks to prepare to take on the role from 23rd May. Many dates will already be in the prospective Lord Mayors diary .

The Labour group have the next highest points total. However only one of their number – their current Leader Janet Looker, who is also a previous Lord Mayor – has over 4 years experience. There are others who may qualify under a rule change agreed last year which allows those who have served for 4 years and who were re-elected on 2nd May to be nominated.  However, that means an inexperienced Councillor being thrust into a new role with minimal time to prepare.

The task might be less daunting if the nomination goes to a former Lord Mayor.

All should become clear when the invitations to attend Lord Mayors Day are issued.

Good luck to whoever is passed the chains of office. 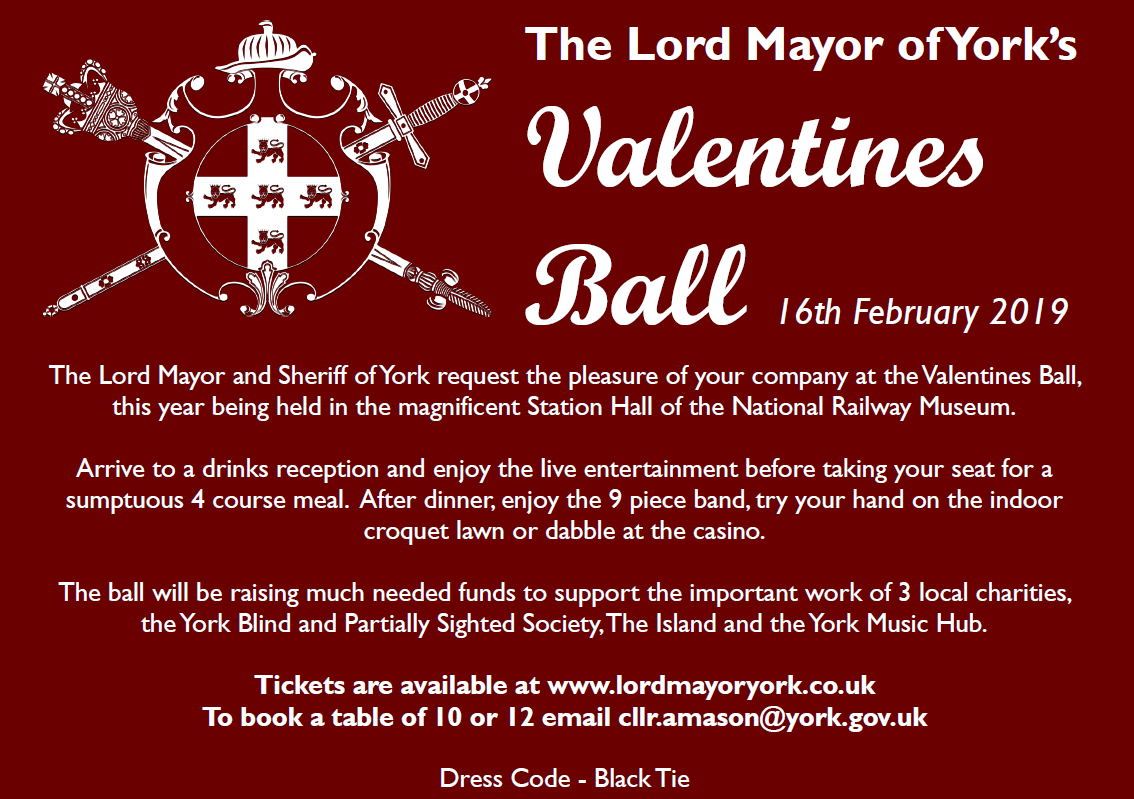 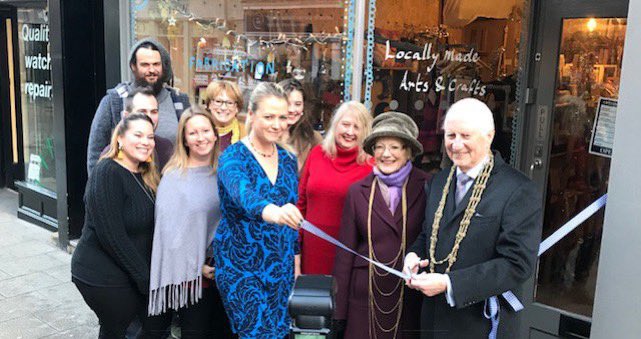 The pop-up, which was officially opened by The Rt Hon Lord Mayor of York, Cllr Keith Orrell, is the latest expansion from Fabrication Crafts Ltd, a social enterprise originally based in Leeds that aims to provide skilled craft people with a place to sell their work.

The store will sell locally made products created by talented crafts people from both York and Leeds. Items will include clothing, home ware, furniture and food, as well as the option to order bespoke items.

Established in 2008, Fabrication works with a number of community organisations including Yorkshire Federated Housing’s Passion4Fashion project. The pop-up shop on Coney Street will remain open throughout the festive season until February.

The shop is being run in partnership with the National Trust, in an attempt to tackle empty properties across the country owned by the body, which may struggle to find tenants due to their listed statuses.

This particular Grade II listed Coney Street building was originally built in the 1600s before being remodelled in the 20th century.
END_OF_DOCUMENT_TOKEN_TO_BE_REPLACED 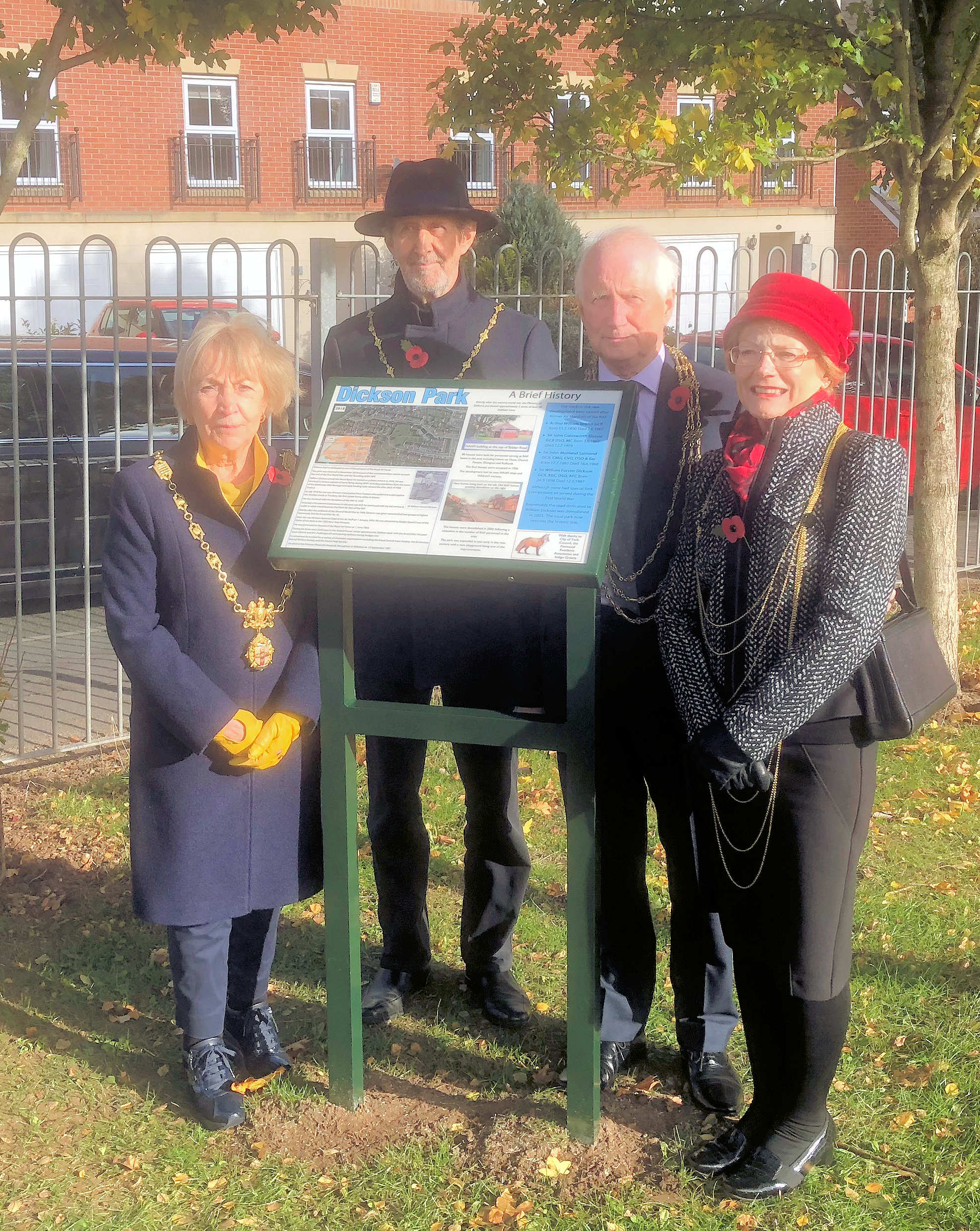 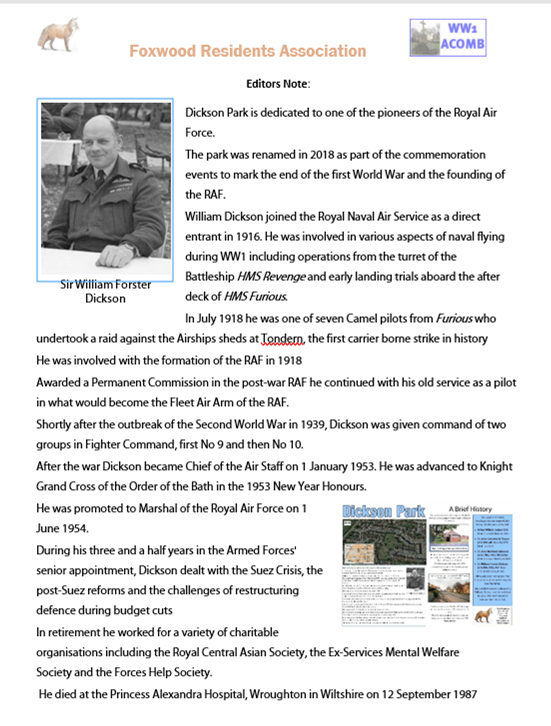 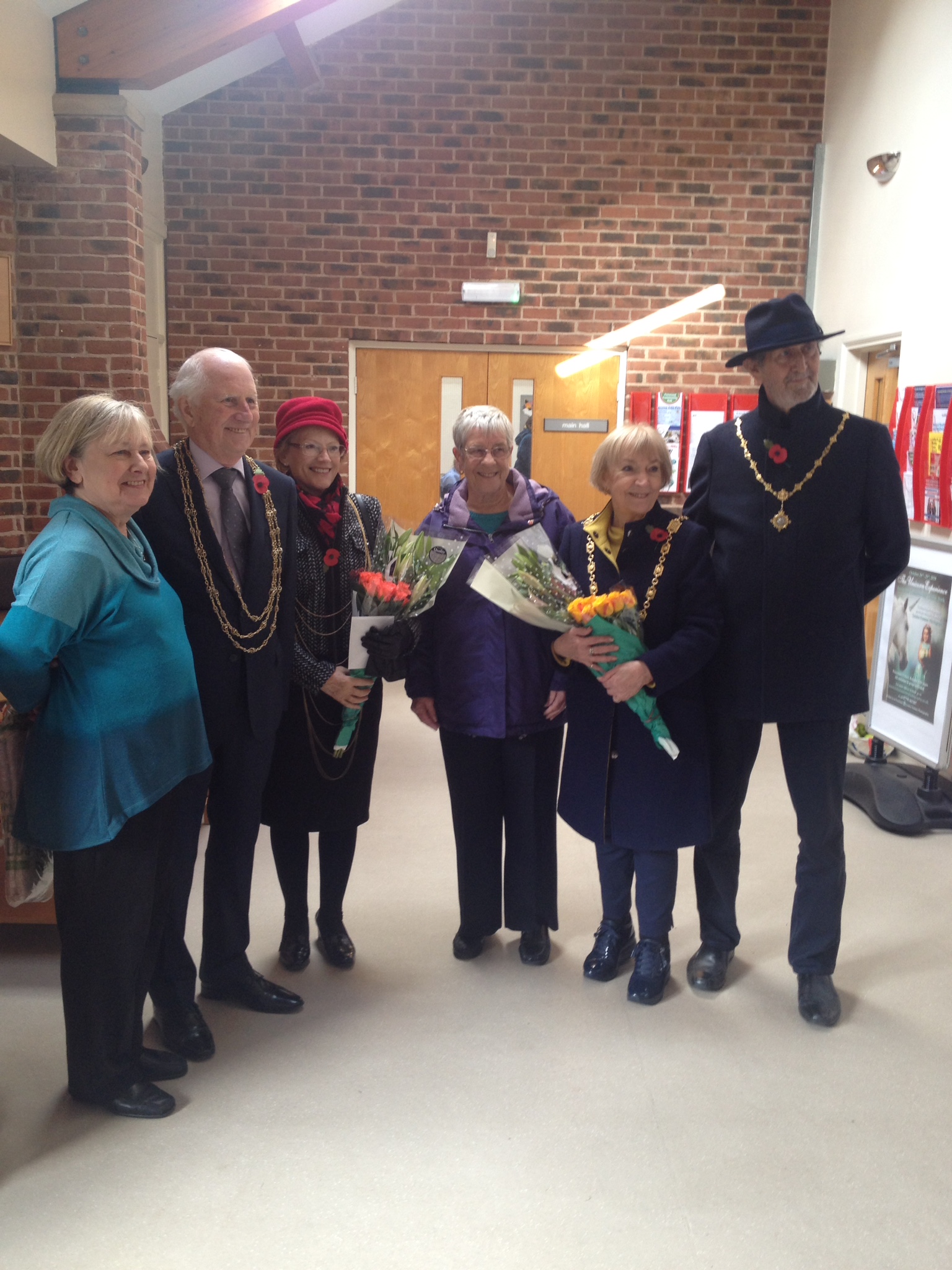 Councillor Keith Orrell will become the City of York’s next Lord Mayor after accepting the nomination last night during a meeting of full Council. 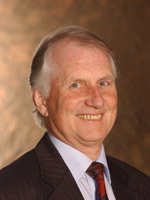 Cllr Orrell, Liberal Democrat ward Councillor for Huntington and New Earswick, has served his local community for 14 years, since his election in 2003.  Prior to this, Cllr Orrell also served on South Tyneside Council for 8 years; making him one of the most experienced Councillors in York.

This will not be Cllr Orrell’s, or his Lady Mayoress, Judith, first civic duty.  During 2003 and 2004, they both served as the City’s Sherriff and Sherriff’s Lady respectively.

“It is a great honour to be nominated for one of the most prestigious civic posts in the Country.

York is very special place so this is a great responsibility. I will do my upmost to uphold the traditions of the Mayoralty.

I am also delighted that Verna Campbell will be my Sheriff, with her husband Professor Colin Campbell as her Sherriff’s Consort. Verna has worked for many organisations across the City and Colin is a well respected academic.

We are all looking forward to doing as much as we can to promote the interests of the City and the residents of York.”

Under the circulation formulae which ensures that every Councillor has the opportunity to serve as the city’s Lord Mayor, the Liberal Democrat Group will nominate for the 2018/19 year.

In recent years the post has been held by Labour, Green and Conservative Councillors.

The LibDem group is in the happy position of being able to nominate someone with considerable Council experience. The name is expected to be made public at the Council meeting taking place on 14th December.

Admission charge to be  set at £6-50 per person 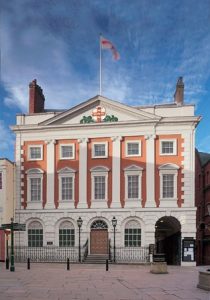 The Council says that the much delayed refurbishment of the Mansion House has been completed and it will reopen to the public in December.

A  report to a meeting taking place next week lists the charges which will apply for general admission to the House as well as the costs of hiring the building for events and filming.

Council officials obviously see the publicly owned building as a competitor for other tourist attractions  in the City such as Fairfax House,  Barley Hall and the Merchant Adventurers Hall. Whether the Mansion House plans will increase the total  income from tourists in the City or simply spread the existing revenue  around more thinly remains to be seen.

No business plan figures are included in the Council report.

The report glosses over the role that the Lord Mayor will have in the future  life of the Mansion House. 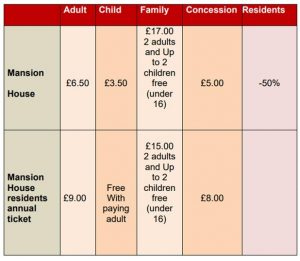 Traditionally the Mansion House has been the home of York’s leading citizen. In recent years the Lord Mayor has occupied a self contained flat at the top of the building.

It now seems that the emphasis of officials will in future be to maximise the commercial income from the property.

The loss of any traditional link, in a City like York, may be regretted in the fullness of time. 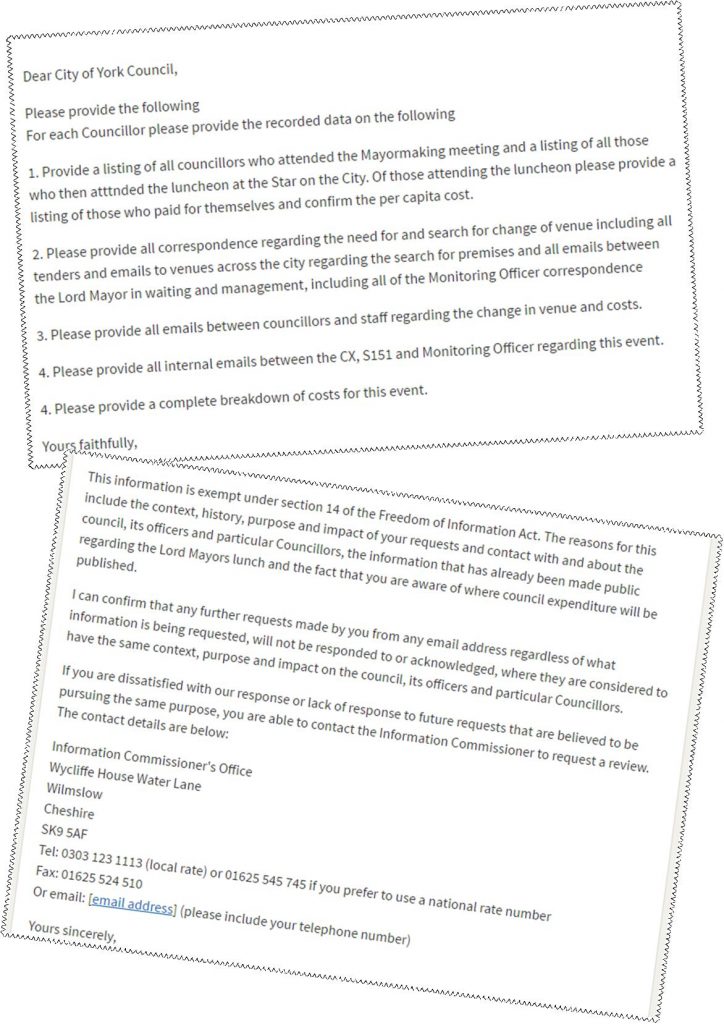 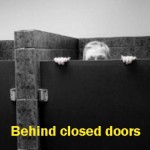 Hard on the heels of its decision to hide information about the work rate of individual Councillors, the York Council has now refused to reveal the costs of yesterdays Lord Mayors luncheon.

A citizen posted a series of questions under Freedom of Information rules which would have revealed which Councillors paid for their own meals at the exclusive Star Inn the City restaurant following the Guildhall event.

The request has been refused because of the “the context, history, purpose and impact of your requests and contact with and about the council, its officers and particular Councillors, the information that has already been made public regarding the Lord Mayors lunch and the fact that you are aware of where council expenditure will be published”.

While the Council may find the particular citizens dogged pursuit of wrongdoing an irritant, it is not a reason to suppress facts in which there is a public interest.

It subsequently transpired that the Assembly Rooms will continue to operate as a normal dining venue until at least July.

Those Councillors who have made a contribution towards the costs of the event – or made a charitable donation in lieu – would be wise publicise the fact.

In the meantime the York Council should come out from behind its barricades and provide more citizen engagement than can be achieved by some ritual flag waving.

NB. Total direct costs of Lord Mayors Day – including refreshments – are normally around £6000

It looks like the lunch which traditionally follows the installation of a new Lord Mayor will take place at one of York’s top restaurants this year.

Officials are understood to favour using the “Star Inn the City” for the event following news that the usual venue – the Assembly Rooms – is unavailable because of building works.  The event is due to take place on 25th May with Labour Councillor Barbara Boyce set to become the new Lord Mayor.

The “Star Inn the City” is one of York’s top – and most expensive – restaurants. There are bound to be eyes raised  at this choice of venue for what is a taxpayer funded event. 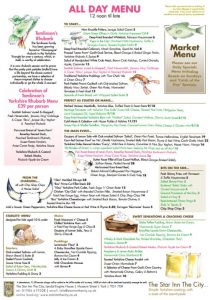 We understand that when the problem with the Assembly Rooms was discovered attempts were made find alternative venues. Traditionally the Merchant Adventurers Hall has been the reserve location but it was already in use on the May date.

The timetable for events like these is set 12 months in advance, so it seems strange that a crisis should develop only a few days before invitations were due to be dispatched.

The obvious solution would be to postpone the event – possibly until after the General Election which is due on 8th June. No doubt officials will be very busy in the interim period and might appreciate more time to make alternative arrangements.

Alternatively guests could volunteer to pay for their own meals.

The Star Inn the City is a popular venue and an excellent choice for a special night out.

Located overlooking the Ouse near Lendal Bridge its all day menu includes a Prawn Cocktail starter at £12, which can be followed by a Rib Eyed Steak at £28 before being rounded off with a selection of cheeses for £10.

A bottle of Bordeaux Grand Cru (Merlot Blend), Chateau Lamartre, will set you back £48.