The reintroduction of a lock-down in Leicester has prompted some sections of the media to speculate that York may be next on the governments list.

In reality, and according to the governments own web site, positive test results remain low in York.

There were two positive results during the week ending 26th June but those were the only cases recorded during the last 4 weeks. The figures do not include local test results (pillar 2) which are still not being made available to the public.

By comparison, Leicester has seen over 150 cases during the same period.

The Local Government Association has published the results of a residents poll which it says is good news for local Councils. Residents views of government have become more positive during the Coronavirus crisis. The results are based on a sample of only 1000 respondents and are not therefore reliable to individual local authority level. The results can be read by clicking here.

The York Council has been very coy about its response to the recent “Peer Review”. 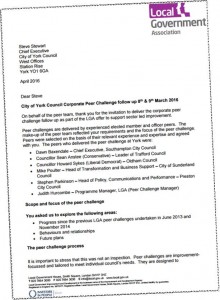 These reviews take place periodically. There have been three in York during the last 3 years although the 2014 review has not been published on the Council’s web site. All are predictable in both tone and content. Gangs of footloose Councillors and officials roam the country offering other Councils (peers) the benefit of their wisdom. Reports always offer some encouragement then fall back on a series of well-worn phrases set to reflect whatever the current central establishment view of local government might be.

We’d all be rich if we had £5 for every review which criticises “salami slicing” of budgets. Actually trying to get economies in all aspects of the Councils services is a perfectly legitimate approach. The alternative is either stopping an activity altogether &/or massive outsourcing (as seen in places like Barnet)

The team of inspectors must have had a field day following the virtual collapse of the Councils administration in 2014.

The grandees in their letter to the Council clearly skirt round the lack of experience in the leadership of the Council (even worse since the report was written in March with the new Tory Leader having only 12 months’ service under his belt & a new Chief Executive only just arriving).  The crisis in confidence in the Council owes a lot to a secretive approach which continues under the new administration.

Performance management -actually measuring progress – has been poor while the customer interface has fallen away against a background of over ambitious promises by the IT chiefs. The inspectors are right to say that the Council should have taken bold decisions early in its term of office to deal with controversial issues. Yet the Guildhall project, the ever growing community stadium “add ons” and the risky – from a taxpayers viewpoint – approach to York Central, are all missed opportunities….. & that without the inevitable conflicts which will arise when the new draft Local Plan is published next week.

None of the recommendations are surprising. The “experts” suggest; 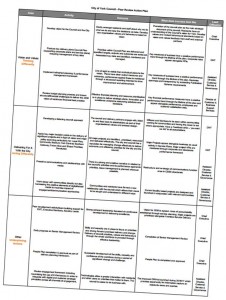 The Council have come up with a response to the criticisms. It has taken them 3 months to do so (the inspectors visited on 9th March) and they have omitted to involve York residents in building a response.

Residents will expect to see quick and tangible improvements particularly in the areas of transparency and performance management.