There were no surprises when the route that the Tour de France will take though York was revealed today in Paris. 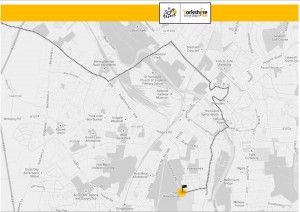 The route will start from the Racecourse on Sunday 6th July taking in the City centre before leaving the City via Bootham, Clifton Bridge and Boroughbridge Road and making its way to Harrogate and Sheffield.

York taxpayers are already set to get a bill for over £1.4 million for the stage two depart event.

There were no surprises either when it was revealed that another Labour Councillor jumped at the chance to visit Paris today for the, somewhat less than historic, announcement of “Le route”.

This time is it was Cllr Tracey Simpson Laing, who represents the Acomb Ward, who took the opportunity to top up her air miles.

These bins would have cost £600 to fill with salt this winter.

NB. Co-incidentally, the cost of 2 airline tickets from Leeds/Bradford to Paris return is around £500. Eurostar is a bit cheaper.

The Acomb Ward salt bins being scrapped by the Council are located at:
END_OF_DOCUMENT_TOKEN_TO_BE_REPLACED