19 trees were planted in Dickson Park this week by a team of volunteers from the Foxwood Residents Association and AVIVA. The trees were supplied by DEFRA. The project was so popular with neighbours and passers by that several offers of sponsorship were received.

We are now led to understand that the York Council’s new “forest” will be planted on land boarded by Wetherby Road, Knapton, the cycle path and Harewood Whin. The precise boundaries have not yet been revealed.

There are some mixed feelings about the plan which, unless government funding can be obtained, could cost local taxpayers over £1 million.

The site is currently in agricultural use and self sufficiency in food production could become more important over the next few years. No economic or environment analysis of options has been published

While there is a precedent for the Council managing local farms (they did so in the last century in an attempt to sustain a supply of land for new tenant farmers) the scale of the forest venture is new.

It has the advantage of potentially helping to reduce pollution levels.

One advantage of the location (if the speculation in the media is correct) is that it is close to the popular Rufforth – Knapton cycle track.

NB. The Council, while saying it has obtained 10 acres of land for tree planting “on the inner ring road”, has still not confirmed where this is located.

UPDATE. According to Cllr Nigel Ayre posting on twitter this is a map of the site. If correct, then part of it straddles Wetherby Road

We’ve cycled the whole length of the cycle track now. Certainly a lot safer than using the B1224. Around 3 miles in length.

It narrows on the section near Harewood Whin where it is an unmodified footpath. There is room to pass.

Only one secured gate on the route (near the A1237 junction). Rest are easy to navigate.

Ironically the roughest surface is on Milestone Avenue in Rufforth. This forms the public highway access to the cycle path. Small cafe in Rufforth provides refreshments.

Pleasant ride in summer although the nearby clay pigeon shooting range is at little noisy!

The promised new cycle link from York (Knapton) to Rufforth has been completed. The last section involved the modification of an underpass crossing the A1237 to allow for safe access for pedestrians and cyclists.

Previously the tunnel had been used mainly by cattle.

Signage has yet to be installed on the route although it is already being used extensively by pedestrians.

The long awaited off road cycle track link from Rufforth to the northern by pass has opened. The route finishes opposite the entrance to Main Street Knapton.

The path offers a relatively quiet link for pedestrians, cyclists and horse riders.

The route was not entirely uncontroversial with some fearing that it might be misused by motorcyclists.

There was also a concern that cyclists would find it hazardous to cross the busy A1237 although this would have been an issue at other possible locations.

NB. One parent, on reaching the cycle path this afternoon, explained to his young son that the dip in the middle of the gate was to allow access for large animals. His son replied, “Large animals? Like horses, elephants and dinosaurs?” An unexpected new hazard for residents of Knapton perhaps!

It appears that the signs intended to discourage short cutting through Knapton have remained in place. This is somewhat confusing for motorists. 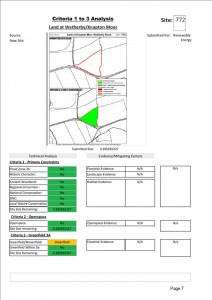 1.8 hectares of land off Wetherby Road (Site 772) could be turned into a solar farm. The area of land is located near to Harewood Whin.

The Council report indicates what criteria have to be met by these farms which generate electricity from solar panels (similar in principle to those now found on many household roofs).

They are not as controversial as wind farms, being silent and relatively unobtrusive. Security at the sites is high though.

Similar sites are planned for Malton Road and Towthorpe