The Council has released details of responses to a survey of elderly persons needs which it conducted earlier in the year.

Asked where they would like to see out their days, the majority said that they wished to remain in their existing home.

Some said that they would like to move to a smaller property.

There was little enthusiasm for placements in traditional retirement homes.

Most of the 406 respondents were owner occupiers.  The lowest response rate came from the Westfield ward (the City’s poorest) and he highest from the Guildhall Ward

Clearly location is an important factor for many older people. They want to be close to amenities and are increasingly reluctant to drive.

This need conflicts with current Council planning policies which have allocated land near Front Street Acomb – which has a full range of amenities – for family housing.

With developers reluctant to even build elderly persons homes the emphasis should be on providing easy to manage homes at sites like Lowfield, Front Street, Long Close Lane etc.

Have your say on York Central proposals 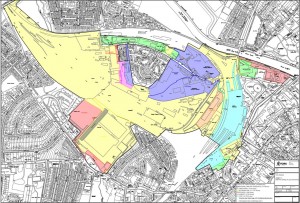 Residents and businesses are invited to have their say on the future of York’s largest brownfield site from this month.

Plans were unveiled last month by City of York Council, Network Rail and the National Railway Museum (NRM), to consult with residents and businesses on what has been labelled as the King’s Cross of the North.
Consultation will take place between Monday 18 January and Monday 15 February, via:

Printed copies of the consultation document and questionnaire are also available at West Offices, Hazel Court and all York Libraries and Explore Centres.

Over the past 12-months, the council has been working in collaboration with Network Rail, the NRM and the Homes and Communities Agency towards a high level masterplan of York Central – a 72 hectare site located in the heart of the city.

The city’s new vision could provide up to 120,000 sq m of high-quality office space, creating up to 7,000 new jobs, a new residential community for up to 2,500 new homes, with opportunities to expand and enhance the National Railway Museum, make improvements to the railway station and create a network of vibrant public squares, green spaces and routes linking to surrounding neighbourhoods.
END_OF_DOCUMENT_TOKEN_TO_BE_REPLACED

Police investigating the theft of a number of dogs who were found at a property in Kelfield near Selby have thanked members of the public for their response to the appeal.

PC Sarah Ward of Selby police, said: “We have had an overwhelming response to our appeal to find new homes and to try and find their rightful owners.

“Sadly, we have not been able to find any of the original owners of the dogs. This is mainly because most of them were not chipped. A number of people have come forward, believing some of the dogs were theirs, but after checks were carried out, sadly for them, the dogs have turned out not to be theirs.

“However, the good news is that we have found new homes for all 19 dogs. Although, they will not be handed over to their new owners for a week, just in case any further potential owners come forward.

“People have been brilliant and incredibly generous. Many people who were not in a position to adopt a dog, have called at the kennels and donated food for them.

“I would like to thank everyone for their kindness, I honestly did not expect such a huge response to our appeal, but thank you so much.”

To recap, police originally seized 23 dogs, however four ave been returned to their rightful owners leaving 19 homeless. The remaining dogs are being cared for by Woodhaven Kennels in South Milford.

The owner of a property in Kelfield near Riccall contacted the police after the animals were abandoned there.

The dogs have not necessarily been stolen from the North Yorkshire area, they could have been taken from the surrounding areas or anywhere in the country. There is no suggestion that any of the dogs have been mistreated and our investigation relates only to alleged theft and fraud offences. Due to the ongoing investigation, we are only able to release limited information.