A new campaign is asking kind-hearted residents and visitors in York to text £3 to local homeless charities which can help people off the streets and into safer and more stable lives, and not give cash direct to people who beg on the street.

The Salvation Army, Carecent, Arclight and Lifeline are four charities working with City of York Council, North Yorkshire Police and Make It York to make people aware that if they want to help those suffering hardship, the best way is by giving to the charities which can make a real, long-term difference. 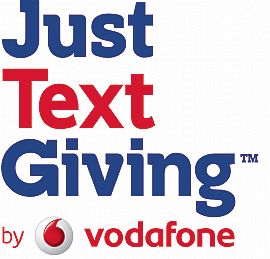 Using the hashtag #NoNeedToBegYork, the campaign will share the message ‘Giving to those who beg won’t help, giving to charity will’ through a year-long campaign. An easy and safe way of giving to local homeless charities is being promoted and people who wish to help are asked to give £3 by texting ‘YORK33£3’ to ‘70070’.

This money will be shared with homeless charities including Carecent and The Salvation Army in York which can offer immediate practical support and longer term support to find a home, maintain a tenancy, training and finding employment, as well as supporting those with mental health or substance misuse issues.

To promote the message, the partnership has been given a stall at St Nicholas Fair in Coppergate by Make It York from 17 – 27 November. Staff from the charities will give out information on the work they do and take donations.

The partner charities confirm that well-meaning people who give their spare change to people who beg on the streets may not realise that this can be counter-productive. Giving direct to people who beg can prolong their situation and discourage them from seeking the right help and support.

They may not realise either that while there are some people in genuine need who beg in York, there are others who travel to the city to beg. These ‘professionals’ boast they can make up to £300 a day by preying on the kindness of York’s residents and visitors which is illegal.

There is about 18 rough sleepers in York at the moment, none of whom need to sleep out because the council and other services offer emergency accommodation to anyone from November to February. As usual at Christmastime, local services continue to provide meals and support for people who experience homelessness, including donated presents to help make the day special.

“Homeless charities and the council’s homeless services are best placed to support vulnerable people. By giving to local charities, you can be sure you will be making a real difference to the lives of those in genuine need.”

Members of the public who are concerned about individuals sleeping rough can ring 0300 500 0194, a national helpline which alerts local agencies to respond.

Donations from the public will be shared between:

The Council is being asked to agree that in future the Peaseholme centre on Fishergate  accepts more challenging homeless cases.

In future “more chaotic/ high risk customers who are also vulnerable” may be directed to the centre and could remain there for longer period of time.

Details of the changes can be read by clicking here

The Council describes the services that it currently provides at the centre as “a supported accommodation centre for 22 people, staffed 24 hours a day. It is situated at 4 Fishergate and caters for single homeless men and women or couples without children.

The hostel is primarily referral based (from another project of self referrals). All offers of accommodation are subject to a risk assessment.

All residents are from York or have a local connection to York.

Residents are at a stage in their lives where they want to move towards more stable long-term accommodation options.
END_OF_DOCUMENT_TOKEN_TO_BE_REPLACED

The number of residents accepted in York as being “homeless” was down to 105 during the last financial year.

Homelessness peaked at 460 in 2003 and has fallen gradually each year since then.

On 31st March, 65 people were living in temporary accommodation – again an all time low. 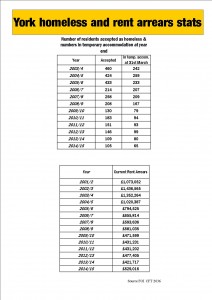 The figures have been published at a time when the Council will on Monday have its first public discussion on a decision made by the last Labour controlled Council to fit armrests on several City centre benches.  Initially the arm rest were welcomed particularly by the elderly and people with disabilities who found that the rests made it easier to get up from the seats.

The modification was agreed without consultation and in a “behind closed doors” decision typical of the way that the last Council did its business. It later emerged that the change was intended to prevent people lying down on the benches and had been targeted at “street drinkers”.

The new Council is right to debate the issue in public.  It is removes the armrests it will face criticism from disability campaigners. If it doesn’t,  it will be accused of targeting vulnerable homeless.

The Salvation Army, Arc Light and other homeless hostels have been flooded with offers to donate food, Christmas meals and presents which will go to help those who are homeless this Christmas.

The generosity of people towards York’s homeless is truly heart-warming. The Salvation Army, Arc Light and other homeless hostels have been flooded with offers to donate food, Christmas meals and presents which will go to help those who are homeless this Christmas. Various social networking sites are encouraging people to come to York to hand out food on Christmas Day but what’s really needed and is most valued is help all year round.

Donations can be taken to Salvation Army, York Citadel or call 01904 545096 or to York Foodbank who welcome non perishable foods and toiletries, on 01904 781983 or visit http://york.foodbank.org.uk/
END_OF_DOCUMENT_TOKEN_TO_BE_REPLACED