….but remains inactive on weeds, hedges and other obstructions

The York Council will discuss next week whether to continue a trial which is aimed at removing ice from some cycle paths.  A report says that a two tractors operated last winter brushing snow and ice for a small number of off road cycle tracks .

None of these were in the Acomb, Westfield or rural areas.

Only a small part of the Tadcaster Road cycle path was treated. “The routes were approximately 18km & 25km long and started and finished at Hazel Court James Street (see map). The service completed 59 runs in total using 9000 litres of pathway KA, the structure friendly non-corrosive solution, and 12000 litres of Probrine, effectively a salt water brine mix”.

According to the report, the City of York Council Cycle Officer says feedback from cyclists can be summarised as “the trial is a vast improvement and that they’d like it extending to other parts of the network which were not included in the trial”.

The winter was (again) relatively mild without sustained periods of sub zero temperatures.

Cyclists in the suburbs and villages will view this report with some scepticism. Once again there seems to have  been no objective attempt made to identify the needs of longer distance and leisure cyclists in west York.

Too many off road paths are impeded by weeds, thorn bushes and detritus. Several are now badly rutted. No regular maintenance inspections take place.

The York Council must start taking the needs of all cyclist seriously. Otherwise it will be guilty of posturing.

It should start by increasing the number of inspections that it undertakes.

It should also agree a routine maintenance programme covering sweeping, weed treatment and hedge cutting on off road paths.

It must also acknowledge that periodically it will have to renew notices and refresh white lines. At the moment many of these have just faded away.

It happens every year to a lessor or greater extent, but low level branches (known as epicormic growth) sprout on some trees.

If left untrimmed they can cause sight line problems for drivers and may even obstruct footpaths. We’ve reported several over the weekend.

The Council is writing to vulnerable tenants telling them that they will continue to get their hedges and lawns trimmed for at least another year.

Earlier in the week, officials had told tenants that they would lose the long standing service, with some being offered £200 compensation in lieu.

Now the housing director has apologised to those affected and confirmed that a more considered review of the service will take place over the next few months. Any changes will be delayed until 2021 at the earliest.

The new letter to tenants still has a patronising tone. It talks about helping the elderly to “enjoy” their gardens. “Volunteers” are still seen as the solution to most problems although many will feel that that particular resource is in danger of becoming overwhelmed.

The letter rather confirms our view that the housing department needs new leadership and with it a commitment to be more open and to consult properly before making decisions.

The key first step is for executive councillors to exert more control over the department and for communication channels with residents associations to be restored.

The garden service is funded from Council house rents. The rent account has a large surplus.

There were a lot of problems during the summer with hedges obstructing public paths. In some cases, the obstructions were caused by Council owned trees and bushes. The jury is still out on whether new processes and budget allocations announced earlier this week will result in an improvement during 2020.

Hedges on the boundary of private gardens and the public highway (including foot and cycle paths) are the responsibility of the hedge owner. Home occupiers must ensure that the highway is kept clear of obstructions at all times

Obstructions can be a significant problem for some users. The partially sighted are at a particular risk and cyclists being “swiped” by stray branches can lead to more serious accidents.

In some cases thorn buses like brambles and roses overhang paths representing an added hazard.

Sadly, like the problems with damage to verges, in recent years the Council has been tardy in ensuring that hedges are cut back from paths. They do have enforcement powers which have been used in the past to force action. In extreme cases hedges have been cut back to the path line after notice periods have expired. The owners were charged for the work.

No such notices have been issued recently.

Of course, some occupiers may not be physically able to cut badly overgrown hedges. It has been suggested that this is a service area that a “not for profit” start-up could usefully exploit. There are already several local gardening companies which offer trimming services.

With leaves now off trees and hedges, winter is the optimum time to deal with long standing problems. This needs to be done before the start of the bird nesting season.

The Council also has powers to require its tenants to cut garden hedges as do social landlords.

We have advocated for some time the appointment of a paths supervisor who could trim back Council owned hedges and initiate action against irresponsible neighbours who cause obstructions. We hope that the Council will fund such a post in its new budget.

We hope to see some well publicised action from West Offices over the next few weeks.

One interesting side effect of the Council report, on improving graffiti removal processes across the City, has been the re-publication of the Service Level Agreement (SLA) or “Customer Contract” for Council estates. The agreement was last reviewed in 2013 and is one of several SLAs which were agreed for different public service areas across the City.

All references to them were removed from the Council web site several years ago.

The SLAs have never formally been abandoned by the Council, but even a casual glance at some of the requirements (above), reveals failings.

Tenants will search in vain for such information on the Councils web site.

The Council no longer even publishes the agendas & minutes of resident’s association meetings on its site. Lack of support from the Council, means that many of the listed residents associations have ceased to function.

Although the Council promises to “remove dumped rubbish within 7 days”, proactive cleansing no longer routinely takes place. A mobile “estate worker” reacts only to reported issues. This may explain the lamentable drop off in street cleansing standards in some estates this summer.

Customer satisfaction and KPI stats are not published at an estate level. Most are not routinely shared with residents’ associations.

Even when problems like overgrown trees and hedges are identified as an issue the Council fails to take effective action.

In Foxwood a list of streets where hedges needed cutting back from public footpaths was identified 6 months ago. The estate improvement budget was identified as a source of resources with action to be taken over the winter period, but the work has, apparently, yet to be authorised by ward Councillors.

The Council should review and republish all its SLAs. Performance against target should be reported frankly and regularly at least on social media channels.

That fresh approach needs to start now. It will need the committed and public support of senior managers and executive Councillors

Lots of people out and about today tidying up their gardens. Hopefully some of the overgrown trees, hedges and weeds obstructing footpaths will be getting attention.

The Council has now published on their web site the comments of their Ecology and Countryside officer on the plan to extend Lincoln Court. 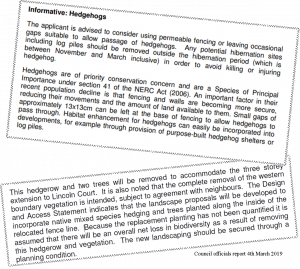 Contractors are currently ripping out the hedge on the school boundary of the site.

The officer states that a replacement hedge must be provided as part of any redevelopment.

There are also concerns about the displacement of bats.

One item, relating to the movement of small mammals like hedgehogs,  will be of particular interest to local residents who are concerned not just about this proposal but also the plans for the nearby Lowfields site.

There a developer (Yorspace) is planning to replace the existing railings with a close boarded fence. Effectively such fences hinder the free movement of hedgehogs

The Ecology officer hasn’t commented on the Lowfield proposal although the wildlife issue has been highlighted by the Lowfields Action Group as part of their objection.