The council is being asked to approve land transactions and lease agreements to enable Yorkare Homes Limited to redevelop and upgrade Haxby Hall. When complete, this will help meet the need for good quality care in high quality care homes across the city.

Yorkare’s plans to extend and improve the accommodation at Haxby Hall will ensure uninterrupted care for the residents. Under the plans, residents will be able to stay in the home whilst work progresses on the site.  The plans will also ensure continued employment for the Hall’s staff by transferring their employment from the council to the operator.

Yorkare are an ‘outstanding’ CQC-rated operator and they aim to extend this popular care home and create over 60 new bedrooms, equipped with en-suite facilities for improved privacy.

To deliver this higher quality of care and ensure minimal disruption to residents, two neighbouring properties have been acquired to provide access to the rear of the site. The council’s Executive is being asked to agree to a long lease for the site, for which Yorkare will pay the council £450,000.

A period of consultation will take place with local residents, community groups and organisations before planning permission is sought.

Separately the Council has said that  “The executive will be asked to agree to procure an extra care developer and operator to develop a mixed tenure extra care development on the Lowfields site previously identified for a care home”. The meeting will take place on 19th March 2020. 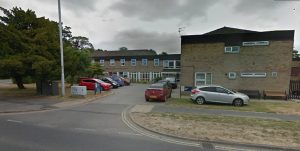 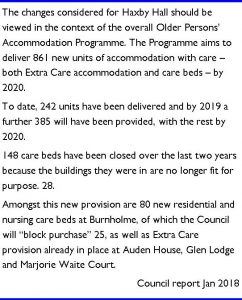 Councillors will consider the future of Haxby Hall older persons’ home when they meet on Thursday 25 January.

Following a consultation with residents, relatives and staff at Haxby Hall, the council’s Executive will be asked to note the feedback and make a decision on whether to transfer ownership and management of the care home to an independent sector provider, with the aim of securing its future and providing modern, improved facilities.

If the transfer of Haxby Hall is agreed councillors will also be asked to:

In December 2016, Executive agreed to consult with residents, relatives and families on the option to seek a partner to take over the 49 bed care home, with a commitment to delivering improved care facilities.
END_OF_DOCUMENT_TOKEN_TO_BE_REPLACED

A new, dedicated facility for people living with Dementia has opened at one of City of York Council’s Older People’s Homes as part of the council’s plans to modernise accommodation for older people.

The new Poppyfields unit at Haxby Hall will provide care for eight older people living with Dementia. The specially designed facility provides a ‘household’ model of care for the residents, where they live together in a small group or ‘household’, and provides easy access to a large secure garden. The facility includes two ‘respite rooms’ to provide short term breaks for people living in their own homes, giving their regular carers the opportunity to have a holiday.

It’s hoped that the new unit will help meet the current need to provide additional specialist dementia support, helping people to maintain their living skills by keeping occupied with simple daily tasks, such as baking, arts and crafts, quizzes and games, as well as ‘meaningful occupations’ such as washing their dishes, all of which can reduce anxiety and agitation.
END_OF_DOCUMENT_TOKEN_TO_BE_REPLACED

All will close by March 2019.  The first will close its doors next year.

Houses will be built on most of the vacated sites.

The Council says that a capital receipt of “at least £2m” for the land will also be realised, confirming that any redevelopment will be by the private sector.

It is proposed that the “facilities for older people originally envisaged as part of the Community Village on the Lowfields site be, instead, provided at a newly built Extra Care and Health Hub which is expected to replace the Oakhaven OPH on “Front Street” (sic)”.

The Council says it

“will be on making best use of the existing stock of Extra Care Housing in the city.  There are five dedicated sheltered housing with ‘extra care’ services in York containing 205 units of accommodation.

Four of these are Council managed schemes – Marjorie Waite Court, Gale Farm Court, Barstow House and Glen Lodge, whilst the fifth (Auden House) is managed by York Housing Association. All homes in these schemes are to rent”.

The Council claims that many of those occupying places in these homes don’t need “extra care” facilities and hints that they may be moved out to make way for those judged to have higher needs!

They say, “We will work with exiting residents to keep disruption to a minimum”

“York is also under-supplied with Extra Care Housing given the city’s demographics and the anticipated growth in the numbers of over 75s expected over the next decade.

Analysis suggests that there will be need for 490 units of Extra Care accommodation by 2020, rising to 645 in 2030, based upon nation benchmarks. There is a need for both Extra Care to rent and Extra Care to buy; currently just one third of the provision in York is to buy despite 81% of York’s older residents owning their own home.

The independent sector is beginning to address this need. For example, McCarthy & Stone are currently building 28 new sheltered homes to buy at Smithson Court on Top Lane in Copmanthorpe. Elsewhere in Yorkshire they are beginning to build and provide their Extra Care offer – called Assisted Living – and we would expect that they will continue to provide new accommodation as the market demands”.

With the overcrowding in York NHS hospitals reaching crisis point over the last few months, partly as a result of a lack of availability of the right kind of care places for the elderly in the City, the prospect of another 4 years elapsing before the issues are resolved is deeply worrying.

Residents and staff at Haxby Hall – one of City of York Council’s Older People’s Homes – will be celebrating ‘Yorkshire day’ on Friday 1 August in style with a BBQ, entertainment and a staff team rounders contest: ‘Yorkshire versus the rest of the world’.