Confirmation that the Community Stadium project is slipping further behind schedule has come with the publication of the agenda for the Planning Committee scheduled to take place on 19th March. 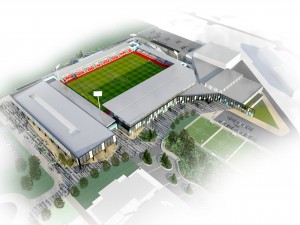 This was to have been the meeting at which that the proposals would have been considered.

The timescale for a July 2016 opening for the stadium always looked very tight given the controversial nature of the “enabling” retail development. The project subsequently was thrown into disarray when first the Highways Agency suspended the scheme and then a “war of words” broke out between Council officials and the Knights rugby club, who were to have been one of the major users of the Stadium.

A date has been reserved in the Councils calendar for a meeting on 27th March but It now seems unlikely that the planning application will be determined before the new Council’s Planning Committee has its first meeting in June.

It looks increasingly likely that the new Councillors, who will be elected on 7th May, will have a can of worms to sort out.

The March Planning Committee will, however, consider some important issues

The committee will consider a change of use from offices to student accommodation comprising of 58 self contained units with associated facilities including shop, cycle store, managers office, communal lounge, gym and laundry. A new shop front to the proposed entrance on the George Hudson Street elevation will be provided. The building is Listed.

The committee will have a second go at approving a new 60 home development at this former factory site.

New teaching block at the University of York

An application for approval of appearance, landscaping, layout and scale of 215 new dwellings, following the grant of outline permission in 2012