An initial £17.5m relief has been applied to rates bills which arrive with York businesses this week.

Having joined local and regional partners in making the case to central government for further business rates relief, City of York council delayed issuing rates bills until after the budget announcement on Wednesday 3 March.

The Chancellor announced that eligible retail, hospitality, leisure and nursery business will receive a rates discount of:

The total value of the rates relief will depend on how many businesses reach the discount cap set by the government:

For eligible retail, hospitality, leisure properties the £2m for businesses that were required to close as at 5 January 2021, and up to £105,000 for business permitted to open at that date.

For eligible nursery properties the relief will be capped at £105,000 per business, regardless of the open or closed status.

Businesses which do not have access to their registered premises to collect their bill can contact the rates team by e-mail at business.rates@york.gov.uk.

Businesses that wish to opt out of the Retail, Hospitality & Leisure Rate discount scheme, or Nursery discount scheme may do so by contacting business.rates@york.gov.uk before 30th April 2022. Please note that any business opting out of this scheme cannot withdraw their refusal for either all or part of the financial year.

The York Council is planning to reduce the Business Rates burden on 1650 retail outlets and pubs in the City.

The Council says that properties that will benefit from the relief will be occupied hereditaments with a rateable value of less than £51,000 that are wholly or mainly being used as shops, restaurants, cafes, drinking establishments, cinemas and live music venues.

The proposal is likely to be good news for those businesses that publicly criticised the Council for what they claimed was a lack of response to their problems during the recent floods.

It is thought that the move could also encourage new businesses to occupy empty properties in the City.

The report says, “As with the previous schemes businesses often fail to apply so the council will automatically award the discount to all the properties that can be identified as meeting the criteria. It will be the responsibility of the business to complete and return state aid forms or risk the award being rescinded”.

There is no cost to the council in providing either discount which will be fully reimbursed by Central Government through the “rates retention system”. The scheme will apply for 2020/21 only unless the government renews the funding support next year 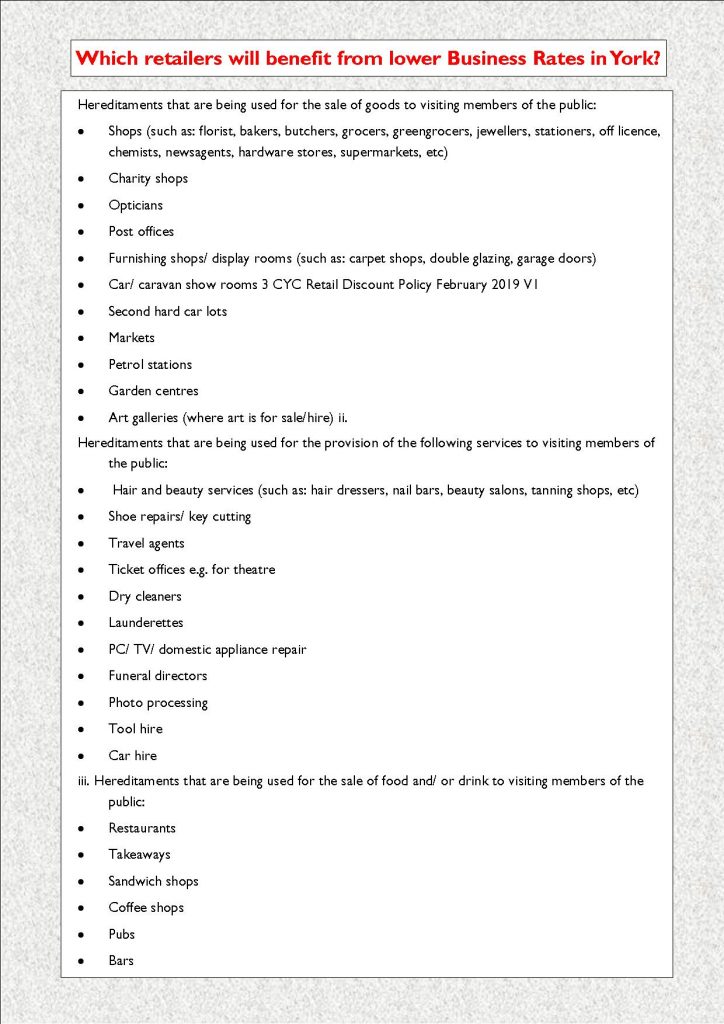 The Council has announced how it proposes to implement the governments rates reduction scheme for retailers.

In order to help the beleaguered High Street, retailers will get a 1/3 reduction in business rates.

The purpose of this new discount is to support the ‘high street’ which has been affected by changes in consumer spending preferences such as online shopping. The relief is temporary for two years from April 2019.

A report to a meeting next week says, “The purpose of this new discount is to support the ‘high street’ which has been affected by changes in consumer spending preferences such as online shopping. The relief is temporary for two years from April 2019”.

There are some notable exclusions from the scheme. These include professional services, cinemas, theatres, museums, night clubs and music venues.

Some eyebrows will be raised that restaurants and bars operating in the profitable hospitality economy in the City centre may qualify for discounts.

The Council will implement an “appeals” process for any businesses that feel aggrieved with their categorisation.

The scheme does little to address the underlying problem of low-cost on-line retailers who many think provide unfair competition. 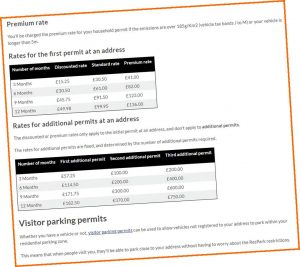 Councillors are to take a fresh look today at proposals to abolish the current discounts for Respark permits.

15 years ago, the then LibDem led Council, introduced discounts for the owners of short, low pollution cars. The intention was to make maximise the use of kerbside space, while providing a modest incentive for drivers to buy low emission models.

Under Tory proposals, discounts would only apply to Ultra Low Emission Vehicles (ULEVs).  Essentially these are electric and plug in hybrids.

The proposers omitted to tell people that no “on street” charging facilities are available in York.

Hence, in effect, the discounts are being abolished.

Perhaps surprisingly the move to retain the traditional discounts comes from Green Councillors. They have something of a vested interest as they represent areas with many ResPark zones. 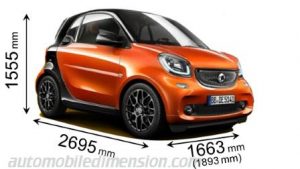 Small cars will lose their discount

They risk being characterised as opposing low emission transport; perhaps a parallel with the Tory government decision to abolish emission based Vehicle Excise Duty bandings in favour of rates based on a vehicles purchase price.

Both positions are counter intuitive to the party’s traditional positions.

Hopefully LibDem and Labour Councillors will get behind the rethink and support a more logical approach to ResPark charges.

The change could lead to a “hole” in the Councils income budget for next year. This could mean a 5% general increase in permit prices. 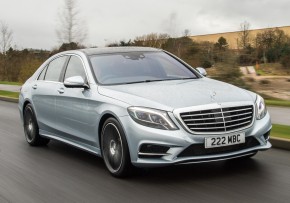 5.2 metre long hybrid behemoths could get discounted parking in York

The York Council looks set to end the discounts available for the owners of small cars who park in central York. The decision will mainly affect Respark districts although some car park season ticket holders also stand to lose their concession.

In March 2004 the then LibDem controlled City of York Council took the pioneering step of offering Respark permit holders, who drove small low emission vehicles, a substantial discount on their parking permit costs. It was the first scheme of its type in the country.

At the time the discount was aimed at maximising the number of vehicles which could be parked in ResPark areas.  Then, as now, demand for on street spaces exceeds their ability particularly in terraced areas.

|The “short car” initiative meant that maximising the use of vehicles like the 2.7-metre-long Smart car could allow everyone a space. They also had the advantage of being economical, low emission vehicles although it was several years later that central government started to encourage low emission cars by establishing vehicle excise duty bandings which favoured small cars.

The Council used the new bandings to offer discounts for owners who bought season tickets for the Councils off street car parks. Drivers of excise duty bands A and B received a 50% discount.

Now the Council, is set to reverse its policy on encouraging small cars. Instead they intend to offer discounts on ResPark permits (and parking season tickets) only to the users of “ultra low emission vehicles” (ULEV). These are cars which emit less than 75g/km or less of CO2 per mile.

815 existing permit holders would be affected by the change.

In effect this means the only vehicles to benefit from a discount will be “all electric” and “plug in hybrid” models.

This is a step in the wrong direction at least as far as ResPark permits are concerned.

Many of the ULEV vehicles available are not “small”. They include models like the Mecedes S Class 500E which is over 5 metres long. The smallest is a VW e-UP (3.5 metres) which is all electric and has a range of 90 miles (probably less in the real world). 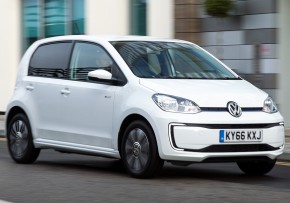 ……and that is the second problem. These vehicles must be recharged after each journey. There are no kerbside charging points in ResPark areas at the moment and not likely to be in the foreseeable future.  Owners would have to drive to and from a public rapid charging point of which there are a limited number in central car parks.

The councils new plan – which will be discussed at a meeting taking place next Thursday –  is ill considered.

It seems designed only to increase the Council’s income from car parking charges. It mimics central governments excise duty decision which focus on a vehicles value rather than environmental impact.

It is estimated that the change could bring in around £140,000 a year extra for the civic coffers.