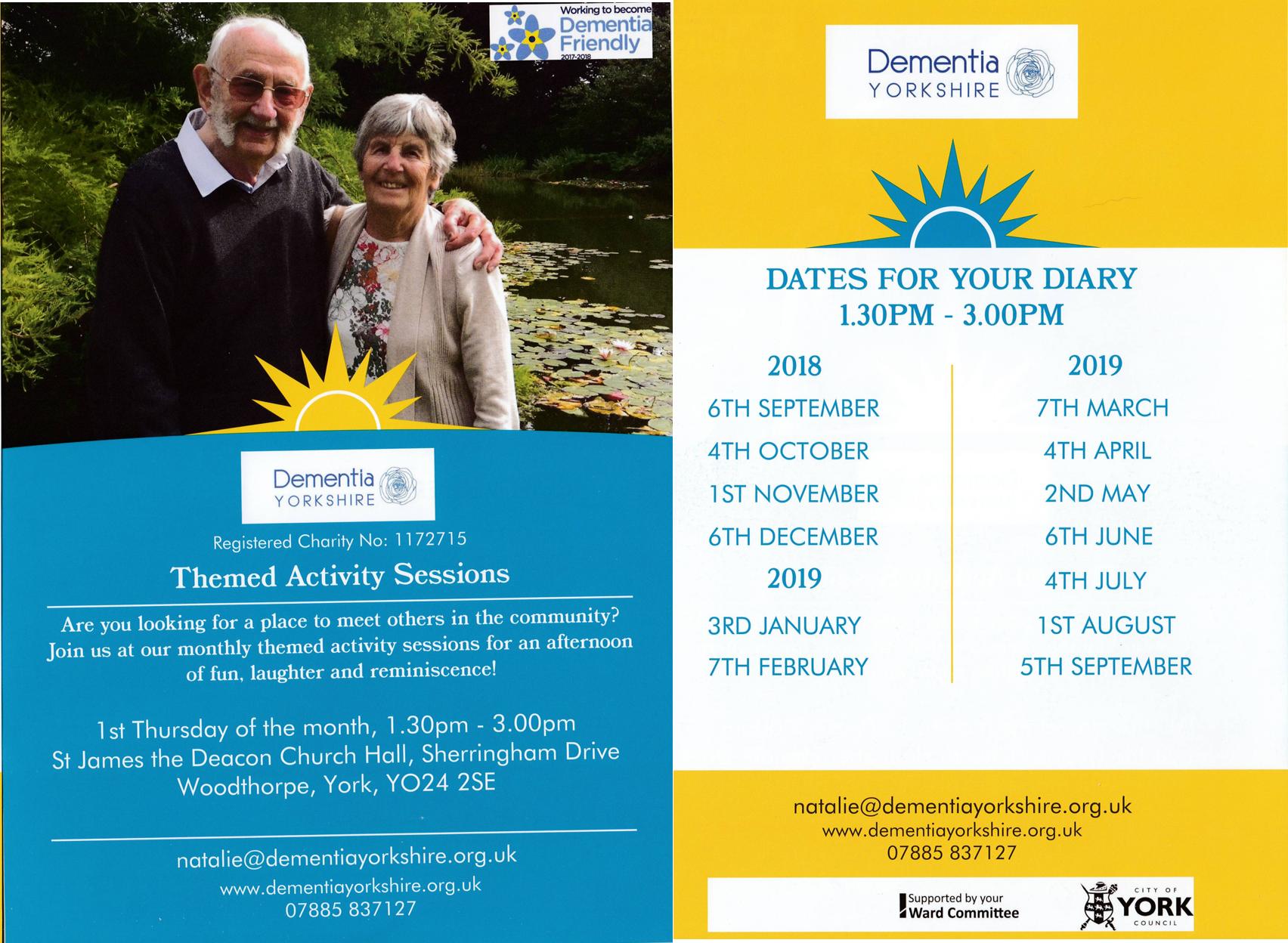 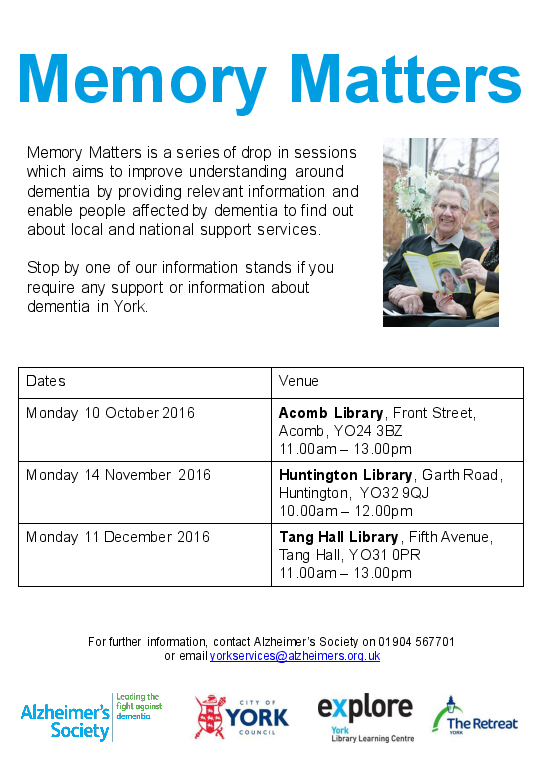 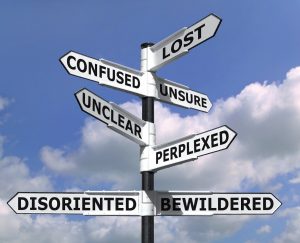 Residents in York care homes could get quicker access to support dementia services thanks to a new trial to improve diagnosis rates.

City of York Council has teamed up with the Vale of York Clinical Commissioning Group (VoYCCG) and Dementia Forward*, to trial a new scheme to provide support and education for care home staff enabling them to screen residents for dementia. Historically, diagnosis required someone to visit their GP or hospital setting presenting with signs of dementia, meaning that many people didn’t receive information and support about their condition as early as possible.

Key staff at the care homes are trained how to use a national screening tool by Dementia Forward, before using it to assess their residents. If someone is assessed as having Dementia they, and their families and carers, can then be offered information and advice and the condition and support available locally, as well as using the Alzheimer’s Society toolkit ‘This is Me’ to help care workers support the resident in their care home.

Cllr Carol Runciman, Executive member for Adult Social Care and Health, City of York Council: “We know that early dementia diagnosis can make it easier for the individual and their family and carers to get the right help and support as soon as possible and help them live with the condition. We hope that this pilot will further improve diagnosis rates in York, supporting our aim to make York a Dementia Friendly City.”

Dr Louise Barker, from the Vale of York CCG, said: “I am delighted that this important project is now being trialled locally.

“For someone with dementia, changes such as moving to an unfamiliar place or meeting new people who contribute to their care can be unsettling or distressing.

“This training is helping care workers to build a better understanding of the person they are caring for and in turn enhance the support they provide.”

Jill Quinn from Dementia Forward says “We are delighted to be part of a project that joins everything up.  We are working with care home staff, GPs, residents and their families.  One of the most rewarding aspects has been the support we can provide to families and anything that raises awareness and improves dementia support is a positive thing.”

For more information about dementia support and services in York visit www.york.gov.uk/dementia 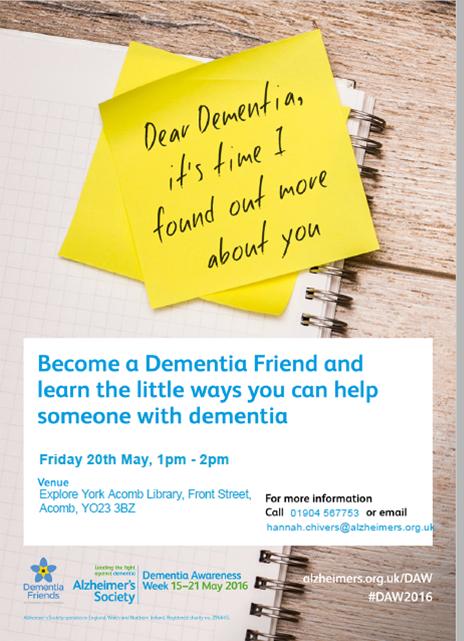 Groups committed to making York a ‘Dementia Friendly City’ are joining forces tomorrow (Tuesday 10 November) to share information and find out more about plans for the future.

The Action Alliance  a group of organisations, individuals and businesses who are working together to make York a dementia friendly city for residents and visitors – is hosting the event at New Earswick Folk Hall between 9.30am – 1pm.

The event will be introduced by the Chair of Yorkshire and Humber Dementia Action Alliance, Steve Poole, and sessions include hearing best practice about how to make cities more dementia friendly, the work of Dementia Friends and Champions, how technology can support people living with dementia, and their carers and help for organisations to create their own action plans.

Councillor Carol Runciman, Executive member for Adult Social Care and Health, City of York Council, said: “With 47 organisations and businesses signed up to York Dementia Action Alliance, more and more people across the city are becoming aware of dementia and how they can help make their work places more dementia friendly. I hope this event will enable organisations to share their experiences and find out what more we can do to make York a Dementia Friendly City.”

A new, dedicated facility for people living with Dementia has opened at one of City of York Council’s Older People’s Homes as part of the council’s plans to modernise accommodation for older people.

The new Poppyfields unit at Haxby Hall will provide care for eight older people living with Dementia. The specially designed facility provides a ‘household’ model of care for the residents, where they live together in a small group or ‘household’, and provides easy access to a large secure garden. The facility includes two ‘respite rooms’ to provide short term breaks for people living in their own homes, giving their regular carers the opportunity to have a holiday.

It’s hoped that the new unit will help meet the current need to provide additional specialist dementia support, helping people to maintain their living skills by keeping occupied with simple daily tasks, such as baking, arts and crafts, quizzes and games, as well as ‘meaningful occupations’ such as washing their dishes, all of which can reduce anxiety and agitation.
END_OF_DOCUMENT_TOKEN_TO_BE_REPLACED 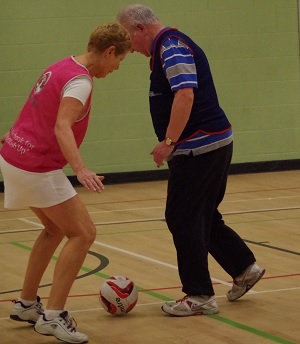 Following a successful pilot scheme between the council and York City Football Club Foundation a new opportunity is available to anyone aged over 50 who would like to step up to walking football.

Walking football is a popular, slower-paced version of the game where running is treated as a foul. This ruling makes it suitable for older people who would like to return to sport or take up a new challenge.

Whether it’s focussing resources on providing more housing, good quality jobs or ensuring that there is a focus on delivering key frontline services, the council feels it’s important that everyone has the opportunity to contribute towards these priorities and feedback their views.

York residents and businesses have until Wednesday 26 August to feedback on the draft proposals, which are based on the new administration’s priorities and the council’s statutory responsibilities.

The plan is built around three key priorities, including:

Feedback can be made via a number of ways below, which will be bought back to an Executive meeting in September for final approval:

National statistics released today have revealed the number of residents claiming Job Seekers Allowance in York has fallen for the fourth consecutive month.

Councillor Keith Aspden, Deputy Leader of City of York Council said: “It is pleasing to see that partnership working across the city is helping to keep unemployment low and defy the national trend which has seen the number of jobseekers increase in the last quarter. The new Executive is committed to building on this and as part of our Emergency Budget we are boosting support for small local businesses. I am also working with officers to increase the number of apprenticeships in the council and across York.

Adult learners offered more than ever before

York Learning is offering its widest range of adult learning opportunities ever with its new Learning 4 Everyone programme which is being rolled out across the city.

On offer for the first time too is the widest ever selection of courses from learning partners across the city, such as the University of York and York College. The WEA which features in the brochure has reported an enormous amount of interest following their inclusion in the brochure.

The new programme can be picked up from libraries across the city and holds information on over 300 courses taking place over the coming months.

Plans for a ballot to take place in November to allow city centre businesses to decide on a proposed Business Improvement District (BID) will be put to the cross-party Economic Development and Transport Policy and Scrutiny Committee on Wednesday 22 July.

Then, on Thursday 30 July, Executive will consider the report which recommends approval of the continuing development of a Business Development District as well as approve a ballot in November 2015 when city centre businesses will be asked to vote on whether they would like to form a BID.

The initiative, led by City Team York, a group of local businesses chaired by Adam Sinclair, would see businesses predominantly within the inner ring road come together to form a BID company to decide how they pool resources to benefit the local economy.

City of York Council has published the latest monthly chapter of its Director of Public Health annual report for 2015 which focuses on dementia.

The council’s Director of Public Health is legally required to produce an annual report on the health of the local population.

City of York Council is supporting Public Health England’s ‘Be Clear on Cancer’ campaign launched today which is aimed at women aged 70 and over.

People living with dementia will find it easier to travel around the city thanks to specialist training undertaken by local taxi drivers.

Dementia Forward -a registered charity which provides a fully integrated service to people living with dementia – has run three free training sessions for drivers and staff at York’s Fleetways Taxis. The company has subsequently joined York Dementia Action Alliance, a group of organisations and businesses committed to changing the lives of people living with dementia in York.

The initiative is part of a citywide campaign to encourage residents and businesses to become more dementia aware, helping York to become a dementia friendly city.
END_OF_DOCUMENT_TOKEN_TO_BE_REPLACED

City of York Council is urging residents and businesses across the city to support the new Dementia Friends campaign.

Dementia is arguably the biggest health crisis facing the UK1: there are currently 665,065 people in England who have dementia2 and an estimated twenty-one million people in England have a close friend or family member with dementia8– because they live with or care for someone who has dementia.

The campaign, launched by Public Health England and Alzheimer’s Society, is encouraging people in York to become a Dementia Friend by watching a short interactive video online to increase their understanding of the disease and implementing their experience on a daily basis. A number of businesses with shops in York have already signed up to the campaign and will be encouraging their employees to become Dementia Friends, including Marks & Spencer, Lloyds Bank and Superdrug.

Paul Edmondson-Jones, Director of Health and Wellbeing, City of York Council, said: “One in three of us over the age of 654 will develop dementia, an incredibly high statistic. But people with dementia can live well, and it is the responsibility of the rest of the community to help them do so.

“It is only by personally understanding the issues that people living with dementia face, can we fully appreciate the challenges they have to overcome on a day-to-day basis. By participating in the short information session to become a Dementia Friend, you are playing crucial role in helping us take one step closer to creating a dementia-friendly society.”

The campaign aims to create a network of one million Dementia Friends across England by 2015. As part of the campaign, adverts will appear on TV and online from 7 May 2014.

For further information on the campaign and how to become a Dementia Friend, please visit http://www.dementiafriends.org.uk/