Some residents are asking for the traffic light controlled restrictions to be lifted at peak times as alternative routes are also congested.

Real time congestion information can be found  on this web site https://roadworks.org/

The Council  will be starting the second phase of work to improve the flow of traffic on the A19 south of York with works at the Crockey Hill junction with Wheldrake Lane starting on Sunday 14 January.

The work is expected to be completed by Friday 4 May. No work will take place over the Easter weekend, and the road will be operate as normal from 30 March to 3 April in a bid to minimise disruption to road users.

An extra southbound lane will be built on the approach to, and through the junction in a bid to ease rush-hour congestion heading south out of York, particularly at the A64 Fulford Interchange. The traffic lights in the area will also be improved.
END_OF_DOCUMENT_TOKEN_TO_BE_REPLACED

A scheme to reduce congestion to the south of the city moves a step closer next week as preparatory works begin on site.

The works – which will not interrupt traffic – have to happen before the main construction to widen the A19 junction with Wheldrake Lane, at Crockey Hill can take place in the new year.

The works include removing invasive weed species (such as Himalayan Balsam and Japanese Knotweed), ten trees and diverting a gas pipeline which runs close to the junction.

While the council has designed the junction improvements to minimise the amount of trees affected, it will provide a more diverse wildlife habit by planting 37 trees of different species in the new year.

An extra southbound lane will be built on approach to, and through the junction in a bid to ease rush-hour congestion heading south out of York, particularly at the A64 Fulford Interchange.

There will be no disruption to traffic during the preparatory works, and residents will be given plenty of notice before the mains construction works begin in mid-January 2018.

This scheme is funded from the DfT’s Local Pinch Point Fund. END_OF_DOCUMENT_TOKEN_TO_BE_REPLACED

City of York Council is asking for comments on new proposals which could help reduce congestion on one of York’s busiest roads.

The scheme will reduce the average time taken to travel on the A19 South through the Fulford interchange junction and down the A19 to Crockey Hill by up to five minutes. The length of southbound queues will also be reduced by up to 50 per cent.

As a result of so many vehicles using this road there are often large queues of traffic particularly southbound during busy times in the evening. This can cause what is known as a ‘pinch point’ or queues of traffic at the Crockey Hill traffic lights (junction of the A19 and Wheldrake Lane). This rapidly backs up to the A19/A64 Fulford Interchange which causes congestion on the A64 off slip-road and on the A19 in Fulford.

The scheme will help address this problem and supports phase 1 which was carried outover the summer of 2015. This helped to reduce congestion and improve public transport journey times and reliability northbound at the busy A19/A64 junction (near the Designer Outlet).

However, for southbound traffic going out of York, the problem of traffic queues in the evening remains.  Phase two will help to ease the build up of congestion along this busy section of road, reducing the risk of blocking the A19/A64 junction and improving public transport reliability and journey times.

Funded entirely from the Department for Transport (DfT) pinch point fund, the scheme is estimated to cost approximately £1million. 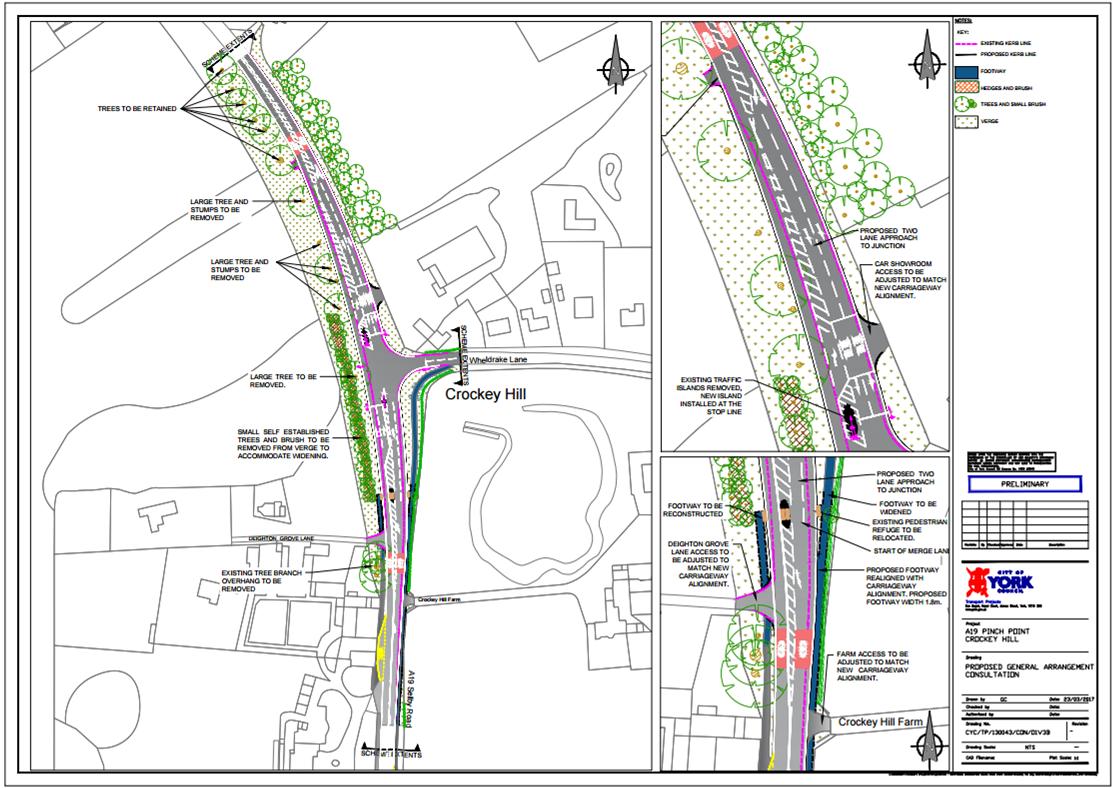