Thursday can’t come soon enough for York taxpayers. On that day the City’s planning committee will decide whether to allow the Ashbank former social services building on Shipton Road to be converted into residential accommodation.

Ashbank has now been empty for a shocking 7 years.

Together with the Guildhall, it is the Councils most underused asset.

The above list was produced in response to a Freedom of Information request. The rates column indicates what the Council might have received if the properties had been let. To this must be added either the proceeds of a sale or lease income.

Several other valuable properties including Oakhaven in Acomb and the prime Willow House site next to the bar walls have also now been unused for over 3 years.

There are ongoing maintenance and security costs at each site.

The list does not include several brownfield sites which are suitable for development. These include the land to the rear of Acomb Library which was purchased 12 years ago but remains unused (currently it is a building compound).

Many years ago the Council used to have a Policy and Resources committee. One of its tasks was to challenge and optimise the use of the Councils portfolio. Sadly it was replaced by a “scrutiny” committee which rarely expresses any interest in the efficiency of the Councils processes.

Six monthly capital programme reports to the Councils Executive often fail to provide an update on long term unused assets. When they do get a mention it is restricted to a couple of anodyne sentences.

It is not just commercial properties that are a cause for concern.

The Councils housing department still often has a 10% vacancy rate on its garage blocks. There are waiting lists for garages in most parts of the City. Some of the garages are located in the City Centre where demand is high.

The housing department has been told to advertise all vacancies in order to maximise income. They have failed to do so.

They don’t even make full use of free social media channels.

The result is that the Council loses thousands of pounds of income each month while on street parking spaces becomes unnecessarily congested. 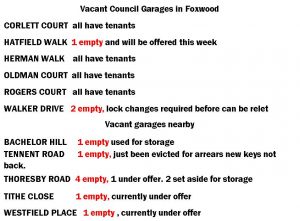 The Foxwood Residents Association recently used the Freedom of Information legislation to find out how many empty Council owned garages were available in the neighbourhood.

It turns out that the number was relatively small.

The Council says that it has a waiting list at most blocks.

However, the Council doesn’t routinely keep an up to date list of vacancies posted on its social media channels.

We think that is a mistake.

An empty garage brings in no revenue for the Authority while the chances of a void garage being vandalised are high.

We think that it may be time to outsource the management of this asset.

A contractor could be targeted to ensure that all garages are kept in use and that they are maintained to a high standard.

It might also help to reduce parking congestion on some roads in the City!

Councillors are expected to day to confirm increased charges for many York Council services. 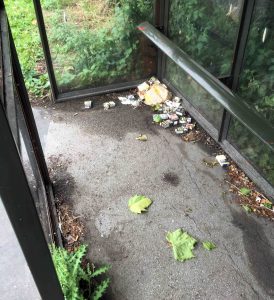 The Council is also hiking the rent for garages. This despite many having been left empty. The Council could bring in more income by actively marketing the vacancies. Filling the garages would also reduce on street parking problems in some suburban estates. Council tenants will pay £7-43 for a garage while private individuals may rent one for £8-92. There are higher charges for high demand are while areas with a low demand attract discount rates

Car parking charges are increasing by 10p per hour. 5 hours parking at a short stay car park will cost £11-50

No elasticity of demand analysis is included in the Council budget papers. In recent years the Council has rarely achieved its budgeted income from parking charges