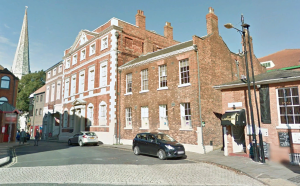 It looks like the Council will be selling its premises at 29 Castlegate later in the year. The building has been in use as a youth drop in centre for several years and before that housed a photographic gallery.

Closure of the youth centre provoked a strong reaction and the Council abandoned its plans to sell the building in 2015. However, a new home for youth activities has now been found at Sycamore House and it seems that the Council will resurrect is plan to sell the building to the York Civic Trust (who run the adjacent Fairfax House and which needs the space to expand).

A meeting on 24th November will discuss how to ensure that taxpayers get the best possible deal out of the change.

Elsewhere the Council is expected to discuss in October whether it can buy the Unipart Rail site on Leeman Road. The site is one that will eventually be redeveloped as part of the York Central project.

The Council has so far failed to identify an investment model to drive forward land acquisition in the area. It has allocated £10 million in its capital programme to fund an access route into the site but many taxpayers are unhappy that this risk is not being born by commercial partners – or government agencies – who stand to profit from the development.

It seems likely that the Council will fund the demolition of its Castle Mills car park on Piccadilly which is described as being in “poor condition”. It is likely to be replaced by a surface level car park until such time as the regeneration of the area actually moves forward.

Regeneration of the Coppergate/Piccadilly area has been stalled for over 15 years.