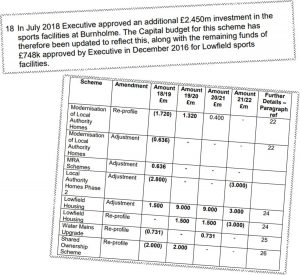 A report to a meeting taking place on Thursday suggests reducing this year’s capital investment programme by £33 million.

The slippage includes major tenant choice housing modernisation works as the Council has failed to appoint a contractor to carry on the programme. No explanation of the programme failure is offered. The delays could affect other works including those dealing with standing water under homes and upgrades to water mains. These issues have not been publicly reported to the Councillor who has Executive responsibility for housing

The Council does still hope to make a start on controversial building schemes at Newbury Avenue (Autumn 2018) and the £22.5 million Lowfields scheme (Spring 2019).

The report claims that £748,000 “approved by the Executive in December 2016 for Lowfield sports facilities” will be spent, thus perpetuating the myth that the new football pitches being provided near Bishopthorpe are in some way linked to the Lowfields redevelopment.

There are also delays on several major transport infrastructure schemes.

Improvements to the northern by-pass (basically bigger roundabouts) will slip into 2019/20 as will a start on the new York Central access road from Water End. 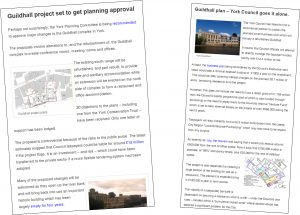 Work on refurbishing the Guildhall will also be delayed with nearly £10 million slipping as a start on site is not now expected before summer 2019. Reopening is unlikely before 2021.

The Guildhall remains closed to the public and is not used now even for Council meetings. Even an empty Guildhall costs taxpayers about £330 a day with much if it going on Business Rates, heating, energy and security. To that should be added the cost of hiring alternative premises for Council meetings and the additional repair costs that inevitably arise when an old building is left empty for an extended period of time.

The Council still expects to invest around £124 million during the present financial year.