Planning application to be determined on 13th August

Council official are recommending that planning permission be granted to build 93 houses on the site of York City Football Clubs existing stadium. The Club is expected to move to a new stadium at Monks Cross later this year.

The plans incorporate a heritage proposal agreed with Historic England which acknowledges the significance of the football ground over the last 90 years.

The report goes on to say,

The retained terrace and tunnel will provide a lasting legacy of the stadium and create a focal point for memory and orientation. The location of the retained terrace and tunnel matches the desired position on the halfway line at the midpoint of the Popular Stand and in front of the POS. The precise length of the section will be determined by conservation, engineering and health and safety considerations but is not expected to exceed 6m.

The preferred location for the memorial garden is around the base of this
structure to provide discreet location for remembrance. The side walls of the terrace could be used to support memorial plaques etc, while caskets and ashes could be buried at the base of the walls. Some existing metal fencing and gates in the Popular Stand could be appropriated to secure the perimeter at the top of the terrace and ends of the tunnel. Similarly, the
wooden picket fence in front of the Popular Stand should be reclaimed to border the memorial garden.

The idea of recreating the centre circle in the middle of the POS is applauded, it would be in alignment with the retained section of terrace and provide a further place for orientation.

The flagpole was originally located between the south-east corner of the pitch and the stadium entrance. It is suggested that the new flagpole is erected as close as possible to this original location, and that it flies a replica of the club flag as a permanent and symbolic reminder of fans’ allegiance to Bootham Crescent. Its proposed location does not exactly match the original position, but it is as near as possible in the proposed layout. Ideally, like the centre circle, it should be slightly further south and east, closer to the new entrance.

Any development will not take place until both the football and Rugby Clubs have moved to the – much delayed – new stadium. Commissioning work there is still apparently held up by the after affects of the pandemic. Social distancing regulations currently make it impossible to stage large scale trial events there, an essential prerequisite for stadium certification.

A response to a Freedom of Information request has finally forced the Council to reveal the terms of its £350,000 loan to York City FC agreed in 2014.

The loan was secured by a legal charge on the Bootham Crescent ground.

The loan involved annual repayments of £35,000.

The balance of the loan is payable immediately if the Club sell Bootham Crescent. It is understood that a house builder still has an option to purchase the site when the football and rugby clubs move to the new LNER stadium in 2020.

In addition the Football Club has agreed to pay £2 million towards the cost of building the new stadium.

There is a legal charge on the club’s assets to cover this liability.

The Council continue to refuse to publish the valuations that they have undertaken on Bootham Crescent.

They also refuse to say how much rent they expect to receive from the football club at Monks Cross (the stadium part of the development is expected to cost around £16 million of the total £47 million cost of the whole development).

The council has confirmed that, once all processes have been complete, it intends to release the lease agreement with York City into the public domain.

Holes for rugby posts may be round………or possibly square

A couple of weeks ago the Knights signed an agreement with the York Council which not only confirmed that the Community Stadium would be their new home when it opens in 2017 but that, in the interim, they would have the use of Bootham Crescent.

The original planning permission for the new stadium had required that an alternative rugby ground be made available before the old Huntington Stadium was closed. 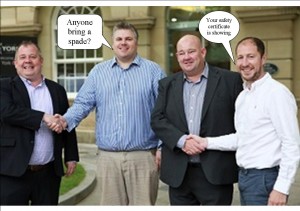 The move to Bootham Crescent seems to have run into two problems.

Claims have been made on social media that the owners of the stadium have not yet submitted an application for a new safety certificate. Apparently this is needed to allow rugby matches to be staged there (although why rugby should raise different spectator safety concerns from a football match will be a mystery to most casual observers).

This is separate from the licensing application for the ground which is being considered today and which we understand is not directly linked to the rugby clubs move.

Once a safety certificate has been sought there no reason why the Council should not issue it in a matter of a few days.

It appears also the four holes, into which rugby posts will be inserted on match days (they are grass covered at other times), have not yet been dug. Some sources say that this may take around two weeks to resolve. Contractor Bernard Cribbins is apparently expected on site shortly.

The Rugby season finishes at the end of September when the play offs are scheduled to take place. Some Knights fans – with the team playing well and currently in second place in their division – are keen to ensure that the larger crowds expected for the run in can be accommodated. 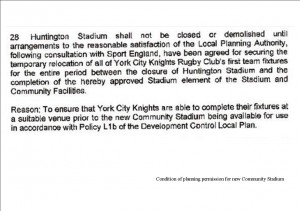 Use of Bootham Crescent seems to be the only local option available to satisfy this reasonable wish.

The Council signed off in January as “complete” the planning condition for the new Community Stadium (see right) which required an alternative venue to be made available for rugby fixtures. 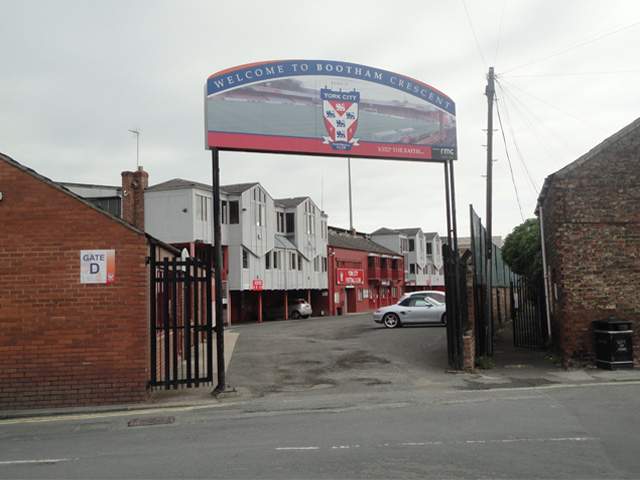