Latest figures published by the York Council suggest that anyone who has a planning application rejected by the local authority has a 30% chance of having the decision reversed on appeal. Appeals are considered by independent inspectors.

The figures reveal that inspectors rejected two appeals against decisions that the planing committee had made and which were in conflict with the recommendations of local planning officers.

One of the these concerned the controversial Spark Container Village who tried to avoid providing cladding on the public frontage of the shipping containers.

Some 18 months after the containers were occupied, the cladding has still not been provided. With the Council still not having advertised the Piccadilly site for sale, there is growing concern that the situation will drift on.

The planning permission for the containers does expire in June 2020 so the matter must come to a head within the next few months.

There has been a small increase in the number of successful planning appeals considered in York during the last year, 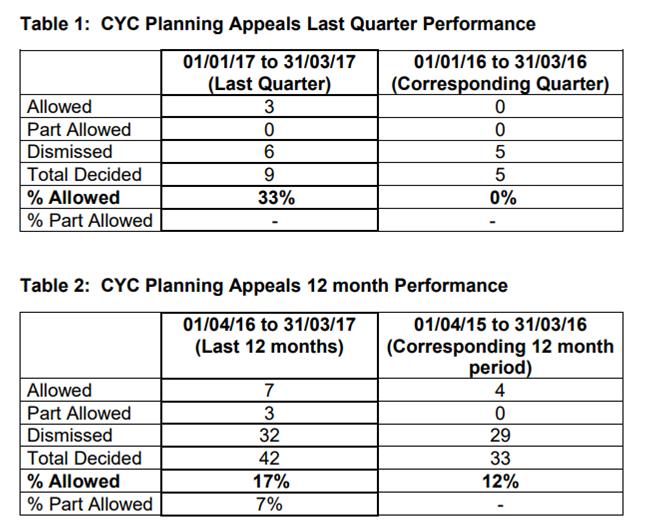 Among the appeals against refusals by the local planning committee were cases in Monkton Road, Bishopthorpe and Heathfield Road, 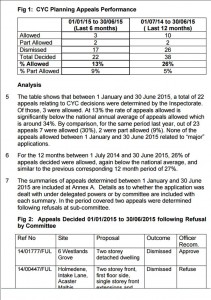 Figures, to be discussed by a Council planning committee tomorrow, suggest that residents have a 25% chance of successfully appealing against a refusal of planning permission in the City.

The York Councils performance – in getting decisions right first  time – is now better than the national average.

That has not always been the case in the past (see 2012 performance below).

11 appeals were outstanding as at the end of July

An analysis of recent planning appeals can be found here

5 of the 12 appeals against York Council decisions on planning applications – considered during the first 3 months of this year – were successful.

At 42% the rate of appeals allowed is above the national annual average of around 33% and higher than the previous quarter figure for York of 18%.

Overall for the last 12 months 27% of appeals were successful.

The Government announced last year that it will use appeals performance in identifying poor performing planning authorities, with a view to the introduction of special measures and direct intervention in planning matters within the worst performing authorities. This is now in place for Planning Authorities where more than 70% of appeals against refusal of permission for major applications are allowed

Most of the successful appeals were against the decisions of Council officials who took them under delegated powers.

A full list of the planning applications which went for appeal can be read here One successful appeal allows the owner of Penn House in St Marys to clean the outside of what is a Listed building! 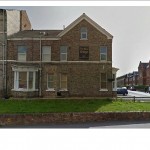 The results of appeals on a further 15 refusals of planning permission are awaited. They include plans to erect 102 dwellings on land to the north of Brecks Lane, Strensall.

NB. A meeting taking place next week is being recommended to approve the conversion of the Blue Bridge hotel in Fishergate into 11 flats and one house.  This is another brownfield site not included in Labours Local Plan as suitable for residential accommodation. The application further erodes the cae for building on Green Belt land.