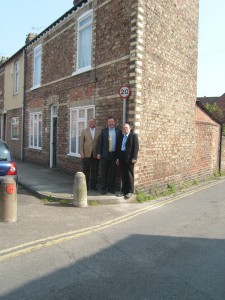 Steve, Andrew and Mark with one of the new 20 mph signs

Work on erecting 20 mph speed limit signs in the Beaconsfield Street area will recommence after Easter.
The one way system signs for the Gladstone Street/Milner Street loop are also almost ready to be unveiled.

Labour would have spent over £600,000 less on road repairs
Labour election promise proved to be “bogus”
Official figures have shattered a Labour claim that they would invest more in road repairs in York.
The figures, compiled by Council officials, show that had Labour budget amendments been successful over the last 4 years, then £608,000 less would have been spent on carriageway and footpath resurfacing.
Commenting LibDem Strategy spokesman Steve Galloway said, “Although the Labour amendments were all defeated, the figures do demonstrate quite conclusively that investing in safe highways is not a Labour priority.
They have a nerve claiming otherwise in their election manifesto.
Even the small increase that they proposed for the current year was at the expense of potentially life saving work on providing anti skid surfaces and in repairing York’s car parks”.
The figures show that the Liberal Democrat Council has invested £52 million over the last 6 years in keeping highways and footpaths in good condition.
“We have made progress in dealing with the backlog of repairs inherited from the Labour Council in 2003. The very bad winter hasn’t helped, but we are on target to clear the potholes before the autumn”

City of York Council is reminding residents and visitors that work to improve the A19/1237 roundabout will stop over the Easter weekend and forthcoming bank holidays.

Work to increase the capacity of Rawcliffe Roundabout will stop from Friday 22 April to Monday 2 May inclusive, to reduce congestion over the holiday period.

Night-time road resurfacing is programmed to start later in May

Building work on the new Childrens Centre at Westfield school has been completed. An official opening of the facility – which is currently providing services in other buildings in the community – is scheduled for Tuesday 24th May.

The decision to get the private sector to run the York Barbican seems to be paying off.
Over 600 tickets for the inaugural HUGE charity gig on 10th May have already been sold. The Lord Mayors charities (British Heart Foundation and “Our celebration” ) are set to get a big boost.
……….and we expect more announcements on prestige events at the centre over the next few weeks.

The Tedder Road playground has been temporarily closed due to damage to the safety surfacing. It is hoped that it will be repaired in the near future.
A new contract, which will see the area secured at night, is being negotiated
The repaired chain for the pulley equipment on Foxwood Lane is back in the City. It was damaged by the extremely low temperatures experienced in January. it is hoped to refit the chain next week. 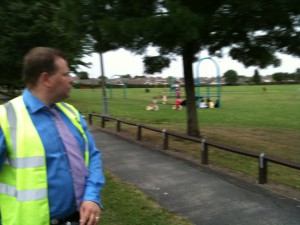 We understand that there will be a delay of about 3 weeks in providing permanent signal equipment at this new crossing (near Severus Street). In the interim temporary Pelican lights are being provided.

From todays The Press
“Detective Inspector Ian Wills of North Yorkshire Police said: “We take the matter of election fraud extremely seriously and will vigorously investigate anybody suspected of electoral malpractice.
“I would urge anybody who has been approached by somebody attempting to influence them to contact the police with information.”
Are any of the 100 or so candidates in this years York Council elections not trying to influence voters? Perhaps Ian Wills meant “intimidate” electors?