The Council’s bill for fueling its 350 vehicle fleet now tops £1 million a year. 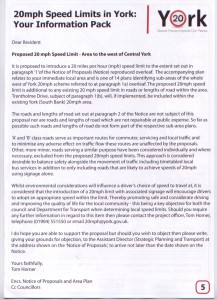 All residents in West York should have received a consultation leaflet on plans for a wide area 20 mph speed limit. They came in a plastic envelope with a leaflet about the Local Plan (about which more later this week) and “Local Link”.

Anyone who has propelled the”pack” in the general direction of the recycling bin may get another by telephoning the Council on York 551550.

The leaflet, after a few ritual attempts to blame the government for introducing 20 mph limits (actually it is entirely up to local Councils to decide), tells residents that they have until 21st June to “object” to the new limits.

The implication is that, if you don’t record an objection, then you must favour the new limit. Inertia and barriers to responses (they require written submissions) aren’t the only problems with the councils approach.

The leaflets are singularly short on facts.

• Secondly the Council are not making available the results of the speed checks that they have undertaken on many of the roads in the area. (We know most cul de sacs not surprisingly already have very low average speeds)

• And finally there is no information about accident levels (again we know that accident rates on the roads that may get a 20 mph limit are much lower than for other roads in and around the City).

We advise everyone to Email 20mph@york.gov.uk and register a formal objection to “The York Speed Limit (amendment) (No 11/4) Order 2013”.

Below are some reasons that could be quoted in support of an objection.

1. The west of York has generally got a good road safety record and already has 20 mph speed limits at appropriate locations (e.g. outside schools).

2. Average speeds, in most of the roads to be covered by the 20 mph limit, are already below 30 mph and the Council’s claim, that the new signs would reduce speeds by 3 mph, would therefore make little practical difference.

3. Accident rates in York (Killed and Seriously Injured casualties – KSI) have reduced dramatically over the last 6 years. Available resources should be focused on continuing the Councils successful accident prevention programme which is partly responsible for this improvement.

4. The impact of 20 mph speed limits on accident rates is not yet fully understood. In some City’s, such as Portsmouth, the introduction of a wide area 20 mph speed limit has led to an increase in the number of KSI accidents.

5. The Police have said that they do not have the resources to enforce a wide area 20 mph speed limit. The Police and Crime Commissioner has confirmed that mobile safety camera vans will not be used to enforce such a limit. It follows that drivers will continue to drive at a speed that they consider appropriate for the conditions on a particular day.

The Council have installed two cast iron bollards at the end of Davygate. No vehicular access is now permitted into Davygate during the – recently extended – pedestrian hours.

The robust bollards require two men to lift them into place. 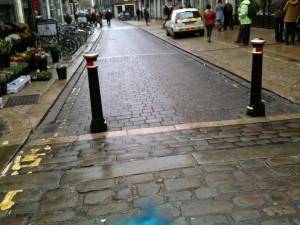 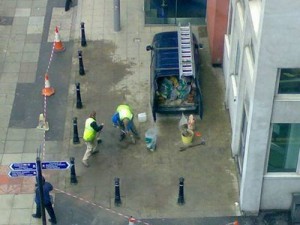 They are apparently modelled on the ironwork used to discourage Panzer tank attacks in the Second World War. (They have been remarkably successful as we understand that not a single King Tiger has managed to get as far as New Street during the first 3 days of this week).

Unfortunately the average Ford Fiesta can still find its way into the area with some ease. The bollards have been placed too far apart to stop the average family car.

Apparently the reason for this is that the horse and carriage – which transports visitors through this part of the City – must be allowed to pass unhindered.

At the Parliament Street end of Davygate the predestrian area ends.

There is still disabled parking provision in St Sampson’s Square.

Unfortunately there is no indication of the end of the pedestrian zone so pedestrians (and horses) may have a false sense of security!

30 days hath September, April, June and November all the rest have 31 save February which has 28 and January which has 80 (and rising) 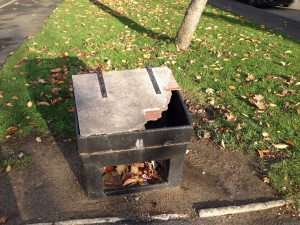 Residents responding to a survey carried out in the Westfield ward, have criticised the York Councils winter maintenance performance.

57% were disappointed with icy weather arrangements.

An overwhelming 97% felt that the Council should top up all salt bins at the beginning of winter.

This winter – for the first time- the Council only filled some of the local salt bins and had to be forced by public opinion to fill the rest around the middle of January.

Unfortunately the bins had been left out over the summer period and many had been damaged. Lids were missing from some of them while many of the rest had become informal litter bins.

We believe that the Council should recover all the bins this summer and repair them.

Then they should make sure that they are out on the streets again, and full, before the icy winter weather starts.

The Council have admitted that the initial sales of use any operator “all York” tickets totalled only 10,000 after the first quarter.

£25,000 of Council taxpayers money was used to publicise the facility. The £5 a day ticket has therefore enjoyed a 50% subsidy from taxpayers.

Around 16 million bus journeys are made in York each year.

Labour Councillors had gone to ridiculous lengths to prevent the sales figure being made public.

We understand that “All York” ticket sales have now dropped off.

The principle of having a “go anywhere, use any bus operator” ticket has wide support.

However the system, introduced by Labour, was clearly not thought through. They should have waited until a “smart card” option was available. 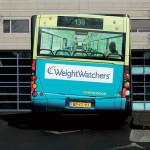 We now understand that “a ride around for £1 deal on bus transport for all young people of York” may also be launched shortly. We hope that this project has been more thoroughly audited to ensure that no additional burden falls on taxpayers

NB. The Council has yet to announce whether it will be bidding for government support from the “Green Bus Fund”. Bids have to be with the DpT by 26th March 2013.

The fund subsidises the introduction of low and zero emission buses.

Since taking office Labour Councillors have reduced investment in road and footpath maintenance in the City by 32%.

Newly released figures obtained under the Freedom of Information Act show the amount invested in each of the last 3 years.

In their 2011 local election manifest Labour promised to spend more on road repairs! 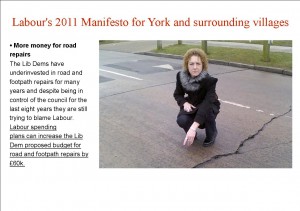 The controversial taxi rank in Duncombe Place could be confirmed as a 24 hour rank at a meeting taking place on 18th April. 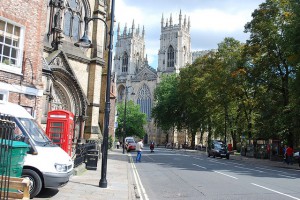 The hours of the rank were extended for late night use despite objections from nearby businesses and residents who pointed out that waiting passengers – sometimes the worse for wear – cause a disturbance for those trying to sleep.

The hope of many, was that Duncombe Pace would be paved and pedestrianised making it an attractive feature of central York and enhancing the setting of the Minster.

Now that plan looks to be in jeopardy.

Labour Councillors are due to consider extending the hours of the rank on a permanent basis at a meeting being held in April.

NB. There are alternative late night taxi ranks available nearby at the Theatre and in St Sampson’s Square

A new bike hire scheme is set to be introduced in York next year.

It could be based on the successful “Scratch bikes” scheme established in Newcastle upon Tyne. 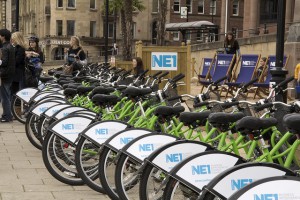 The scheme there started originally as a facility aimed at students but has now expanded to have around 150 distinctive green bikes generally available.

It is sponsored by NE1 a Business Improvement District (BID) which, in turn, is supported by City Centre businesses.

York doesn’t not have a similar institution at present and backing for introducing a BID 6 years ago produced a lukewarm response.

Hire bike schemes are nothing new to York, of course.

Several schemes have been tried over the years but have mostly failed because of dramatic peaks and troughs in demand.

In the main these reflect the patterns of higher education academic years as well as the weather and the relatively compact size of the City..

Security and the availability of sites on which “parking” rails can be established are other issues that will have to be overcome.

Any introduction in York is likely to be subject to a 12 month trial.

Promoted by Clifton Cycling Club in conjunction with British Cycling the races will see hundreds of cyclists from grassroots to elite level race through the historic streets of York.

END_OF_DOCUMENT_TOKEN_TO_BE_REPLACED 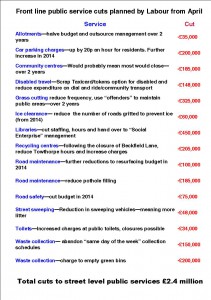 Labour’s hopelessly misjudged Council budget proposals are set to be approved tonight. Cuts to all front line public services are planned yet

Labour also intend to retain a £1 million a year “slush fund” which is used to pay for a range of inessential “vanity” projects.

The £1 million this year has been used to pay for lighting and firework displays, free WiFi access in the City centre, a plan to open the Bonding warehouse as a “digital media hub”, building design competitions, an “innovation catalyst” programme; not to mention the occasional foreign travel trip.

More waste is evident in the Councils capital programme where commitments to introducing an unnecessary Citywide 20 mph speed limit and the purchase of a barge for use as an arts centre have seen interest payments, on borrowed money, double since Labour took control of the Council.

Abandoning these “vanity” projects and making good use of the reduced running costs (down by £375,000) of its new HQ would allow the Council to restore many of the most damaging cuts.

• A 1.9% hike in Council tax levels (despite central government offering to underwrite the costs of a freeze)

• Privatisation or outsourcing of leisure/swimming pool management the Warden Call service and the “Sheltered housing with extra care” service. Even the Mansion House will be commercialised

• At a time when people are rightly worried following revelations about meat quality, trading standards faces a £42,000 cut, while there will be less air quality monitoring.

• There will be less for job training as Future Prospects loses £150,000

• The closure of elderly persons homes will be brought forward meaning that some residents face double moves before new accommodation is completed. In 2014 pensioners will face a 90p charge when using their passes on Park and Ride services

• Social Service clients with personal budgets will lose out from a £500,000 budget cut

Some reductions in expenditure were inevitable.

Labour have simply chosen to economise on the wrong services.