Several local issues have been raised with the Council. They include: 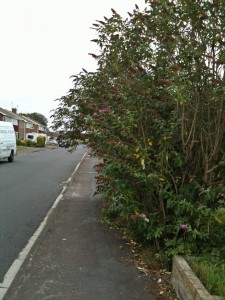 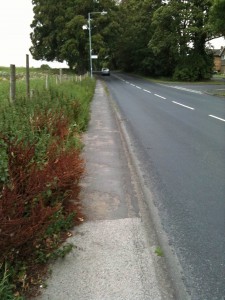 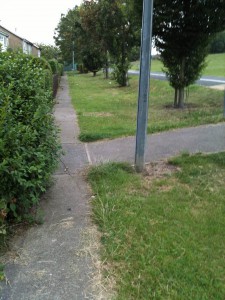 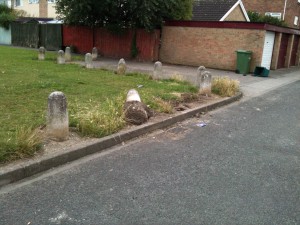 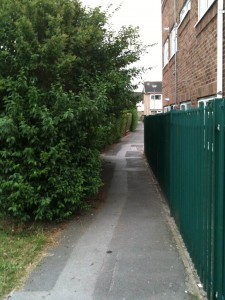 Join the Crime Team, with Steve Skidmore
Friday 12th August 11.00 – 12 noon
Suitable for 8 – 12 year olds £2 per person or £5 per family (maximum 2 adults and 3 children). Join author Steve Skidmore as he tells us all about his new series “Crime Team”. Help him to solve the clues and crack the mystery. We need you there. Only you can prevent disaster!

It is difficult to see a happy outcome now for the Union Terrace saga.
A little more patience and a compromise with broad support might have been found.
Now the scheme looks to be heading for the law courts although not until the item has been “called in” for scrutiny (the Leadership don’t have to respect any criticisms that may result from that process) and subsequently the formal consideration of the public consultation exercise (which is devalued because it excludes the “no sale” option)
The Councils consultation document can be found at http://www.york.gov.uk/council/consultations/current/
It’s a shame, what has happened, because the Council did have a way of resolving competing priorities, with the full involvement of residents and other stakeholders, through the LDF local plan process.
I have been asked to publish my statement on my knowledge of St Johns ambitions and the timeline which led up to the sale proposal being tabled by the Council’s Labour Leadership. I am happy to do so below. 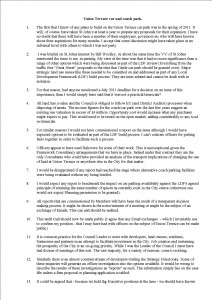 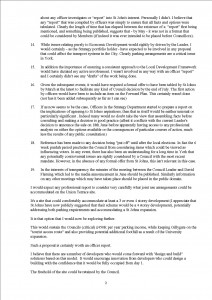 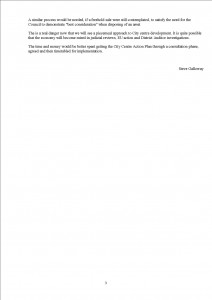 In the interests of transparency the minutes of the Labour Group meeting, which decided not to include in the Councils forthcoming consultation exercise the option of not selling Union Terrace car/coach park, are reproduced below. Kersten England’s interpretation, of events leading up to James Alexander’s announcement on June 18th that the car/coach park was to be sold to St Johns, are disputed. (see next article) 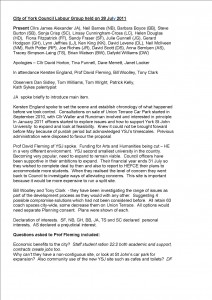 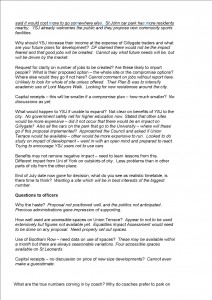 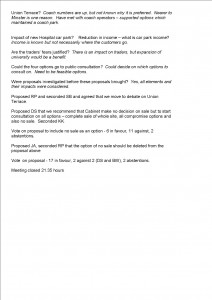 Hugh Bayley MP has acknowledged that he was mistaken when claiming that the Union Terrace sale had been under discussion for 18 months. He has promised to write again to all those who received his letter, containing the bogus information, clarifying what really happened.

Separately the St Johns Vice Chancellor has written to confirm our understanding of the timetable which led up to the matter being coded. He says in an Email to me,
“I am sorry, I think Hugh must have mis heard/understood me when we talked recently, my apologies if I wasn’t clear. I took up post in June 2010.
I first talked to council officers about the idea in the autumn of last year. Regular and detailed discussions took place from early this year between my colleagues at York St John and Council officers.
I also recollect we had a discussion in the spring of this year, can’t remember the event, where we touched on the subject of Union Terrace. This was , I think, our first discussion on the issue.
Hope this helps and apologies for any unintended misunderstanding”.

York Central Labour MP Hugh Bayley has been writing to some constituents claiming that the sale of Union Terrace has been under discussion for “18 months”. In the letter to a constituent (see below) he claims that I met with St Johns Vice Chancellor David Fleming in “January 2010” to discuss the Universities expansion plans.
That would have been a truly remarkable achievement on both our parts as David Fleming only took up his post at St John’s 6 months later in June 2010.
I have invited Hugh Bayley to retract his, obviously bogus, claims.
It just goes to show though how the truth has been the main victim of this ill considered project. 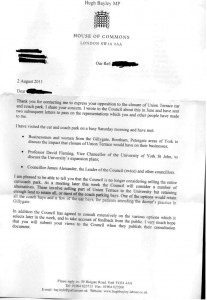 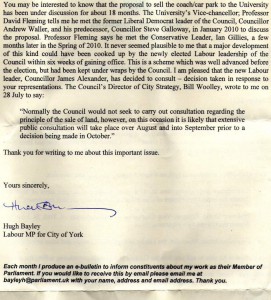 Although Labour have decided not to give residents the option of “no sale” when consultation starts shortly on the Union Terrace issue, it is apparent that their party is divided on the issue.
What has been forgotten is that there are many other controversial proposals that they have in the pipeline. Having endorsed the Simpson “Beautiful City” report, with what seemed indecent haste last year, the Labour Leadership know that they now have to deliver a traffic free “Great Street” – with a tram link (!) – amongst other things.
Car parking will be a big issue as the Councils local plan approaches completion. The Haymarket car park is already on the Council “for sale” list and several groups want to see the Castle car park grassed over.
The Council’s current policy – agreed in 2009 when all 3 major parties backed it – is to retain broadly the same number of parking spaces in the City centre as exist now. This hasn’t been changed by the new administration so one wonders where these spaces will come from?
The Council now needs to pause. It needs to have a clear and practical vision of where its wants to be with the City centre in the short and long term.
One piece of good news for James Alexander though. I understand that he took second place in the George Michael look alike contest over the weekend. Congratulations! 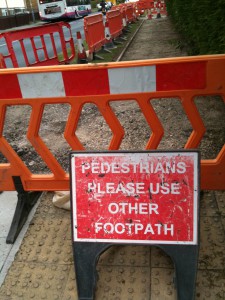 Work has started on resurfacing the footpaths outside low numbered homes on Foxwood Lane. It is expected to take about 2 weeks to complete. 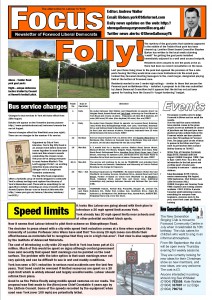 Wednesday 3rd August Time 7.00pm
Price £3.00 (YorkCard) or £4.00 Do you know your Morse from your Poirot? Test your knowledge and pit your wits against other readers. A quiz covering a wide range of crime writing. Come as a team (max 6) or join a team on the night.

Be a Cheerleader!
Thursday 4th August 2.00pm – 3.00pm
All sessions are for 5 – 8 year olds. Tickets cost £2 per person or £5 per family (a maximum of 2 adults and 3 children). Have you ever seen cheerleaders performing at a match and wanted to join them? Here is your chance to have a go. No equipment needed. Just come in comfy clothes.