North Yorkshire Police has pledged its support to a European road safety campaign warning against the dangers of not wearing seatbelts.

The initiative which is being coordinated by the European traffic police network TISPOL runs for one week from Monday 12 March 2012 to Sunday 18 March 2012.

Officers will be carrying out checks on the county’s roads throughout the campaign to ensure that motorists and their passengers are belting up.

It is estimated that universal seatbelt use would save 6,000 lives and prevent 380,000 serious injuries a year across Europe.

Officers are urging drivers to support the campaign and take responsibility for their own safety and the safety of their passengers and other road users.

Traffic Constable Paul Moon, of North Yorkshire Police’s Roads Policing Group, said:
“The benefits of wearing a seatbelt are well documented but unfortunately some people are still failing to wear them when they get behind the wheel .

“The simple fact is that wearing a seatbelt can save your life and I urge all road users to make the effort to use one and ensure that their passengers do the same.

“Over the next week officers will be stopping vehicles to ensure that the occupants are wearing seatbelts and if you aren’t it is likely that you will be fined.”

TISPOL is committed to reducing death, serious injury and crime on Europe’s roads. Its activities are guided by research, intelligence, information and experience, to produce measurable results that contribute to reducing casualties and making roads safer.

York West Safer Neighbourhood Policing Team have been working in conjunction with City of York Council and Safer York Partnership to provide support to elderly and vulnerable victims of burglary.

Following an increase in burglaries in the Acomb area of the city, a clear pattern emerged which identified elderly and vulnerable residents as the main targets. A scheme was set up whereby members of the local policing team visited residents in this area to offer crime prevention advice and reassurance. This was supported by the City of York Council handypersons scheme fitting security equipment funded by Safer York Partnership to secure vulnerable premises and make the properties less accessible to burglars. Equipment supplied through the scheme included internal alarms, security lights and window and door locks.

Sgt Iain Sirrell from the Safer Neighbourhood Team said “This initiative has not only ensured that these premises are now secure from future burglaries, it has also provided essential reassurance and peace of mind to the elderly residents in this area.” 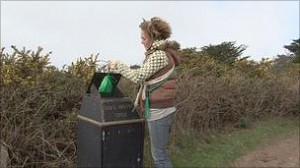 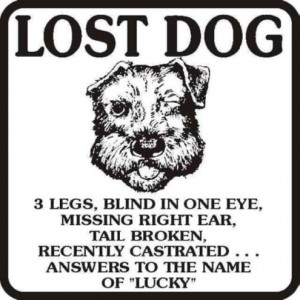 At a time when complaints about dogs fouling public areas are on the increase, the York Council is on the brink of scrapping its dedicated Dog Warden (animal welfare) service.

Instead a very much reduced enforcement service will be provided by street environment officers (who already have more than enough to do).

The move comes in the wake of a decision to reduce the number of “poop scoop” bins in the City by 20%.

It is another short sighted measure by a Labour administration at the Council which has muddled priorities. Basic services like this are simply more important that setting up multi million pound “innovation” funds.

Currently the dog wardens investigate complaints about irresponsible dog owners who fail to clear up after their dog. Owners who fail to do so face prosecution or the issue of a £50 fixed penalty notice. The Dog Warden can be contacted on their hotline on York 551530 email: animal.health@york.gov.uk (including missing dogs or attacks by dogs)

Further information can be found on the Councils web site at http://www.york.gov.uk/environment/Animal_welfare/Dog_warden_service/Dog_warden/

To mark the London 2012 Games, City of York Council is inviting local sports clubs and fitness organisations to take part in an exciting programme of events to be held across the city this summer.

York’s celebrations for the London 2012 Olympic and Paralympics will kick off on 19 June when the Olympic Torch Relay passes though York. The relay will mark the beginning of a series of Sports Club Open Days followed by Celebrating Ability Day at Energise on 24 August, the Just 30 Fair on 15 September and ending with the Eng-AGE 50+ games on 1 October.

The clubs can sign up to help welcome the Olympic Torch Relay to York by celebrating along its route, or they can hold a stall and give taster sessions at the Just 30 Fair, or they can take part in the Eng-AGE 50+ Games.

All the events are free to participate in and the council can support clubs with the organisation, promotion and hosting of some of the events.

Any sports or fitness organisation wanting to become part of York Gold 2012 should contact Neil Gulliver on 01904 553377 or email neil.gulliver@york.gov.uk 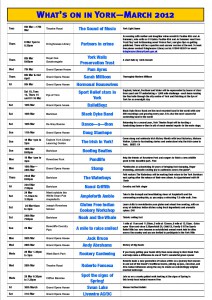 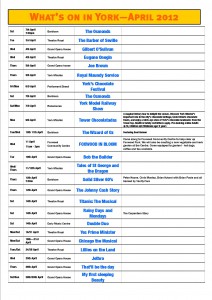 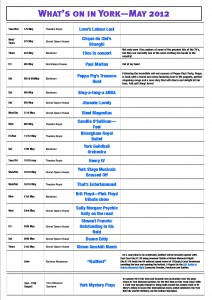 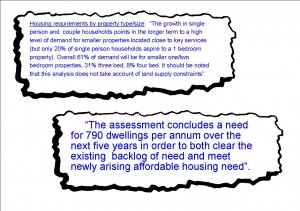 A new study has confirmed that fewer homes need to be built in the York area over the next few years than previously forecast. In 2010 consultants GVA were commissioned to undertake a new Strategic Housing Market Assessment (SHMA) on behalf of the North Yorkshire Strategic Housing Partnership.
It provides and assessment of recent and current trends in housing supply and demand and helps in understanding the broad impact of economic and demographic trends and the various factors which drive the demand or need of different households for different types of housing.

The new study suggests that the City will need between 686 and 800 new homes each year.

This is less than the Council has included in its Local Development Plan and will help to sustain the argument, likely to be put at the public examination of the plan later in the year, that the City does not need to reserve large parts of green belt land for potential development.

North Yorkshire Police will be carrying out mobile safety camera enforcement on the following (York area) roads between Wednesday 7 March and Tuesday 13 March 2012. 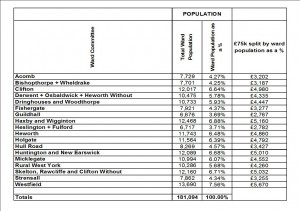 There may be less than £6000 to spend on improvements in the Westfield Ward over the next financial year according to figures obtained from the Council.

Although a small “pot” is being retained for local voluntary groups -and their is a promise of an allocation of £19k for “needy areas” – it is clear that the crime prevention, parking and play provision programmes will now go “on the shelf” until after the next Council elections in 2015. 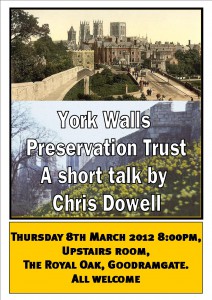 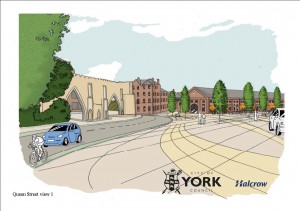 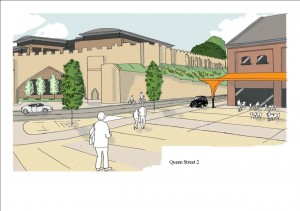 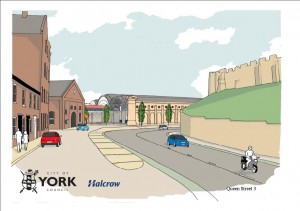 A Council working group is discussing today what the new road layouts may be as a result of the redevelopment of the land behind the station (York central) and the former British Sugar site on Boroughbridge Road.

Most interest is likely to be generated by the illustrations indicating how the area around the station might look if the Queen Street bridge is demolished (see right).

However, the report also names Chancery Rise (the former access to the carriage works) as the potential major access to York Central. The route would run parallel to Wilton Rise and could affect the Cleveland Street playground.

This route would be the cheapest to build at an estimated cost of £9.1 million. 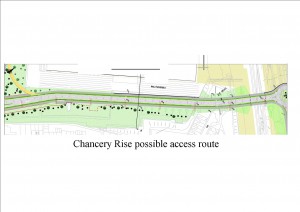 Other alternatives near the Holgate Business Park are still being evaluated. These options would also have some amenity impact on adjacent residential properties on Renshaw Gardens, and require re-provision of existing open space.

It is likely that a second access would be provided from Water End near the Millennium Green. This is likely to be towards the end of the development period.

Some other local access routes into the site from Leeman Road are also now planned.

The Council report is weak on indicative costs. There is no split between the assumptions being made on developer (S106) contributions and public sector liabilities.

There is also a need for clarity on proposed access arrangements through the Marble Arch Bridge. There are massive implications on the rest of the City’s road network and these need to be modelled as soon as possible.

Residents will expect (and need) informed consultation with choices. There is a major possibility of confrontation with some Leeman Road/Holgate Road residents if they are not given more information quickly and in an accessible format (the Council report contained 450 pages with other supporting papers only being available on the web).

There is also a need to address issues like the provision of off site parking (for York Central residents) at – for example – the park and ride site.

This development is currently effectively on the shelf because of its costs. It will go ahead at some stage – the only issue is “when”. The time available needs to be spent separating the “nice to have” (demolishing Queens Street Bridge?) from the “essential” (the bridge access from Boroughbridge Road), if an early start is to be brokered.